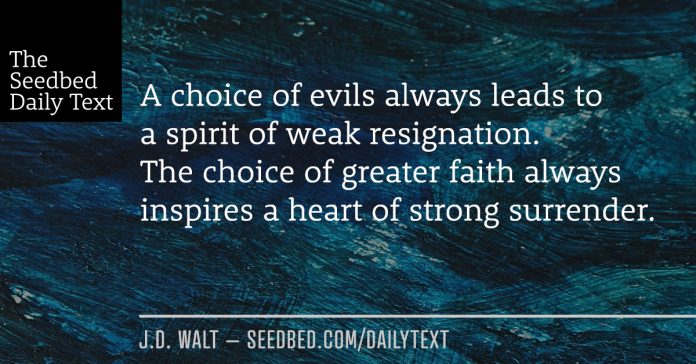 5 Then Pharaoh’s daughter went down to the Nile to bathe, and her attendants were walking along the riverbank. She saw the basket among the reeds and sent her female slave to get it. 6 She opened it and saw the baby. He was crying, and she felt sorry for him. “This is one of the Hebrew babies,” she said.

7 Then his sister asked Pharaoh’s daughter, “Shall I go and get one of the Hebrew women to nurse the baby for you?”

8 “Yes, go,” she answered. So the girl went and got the baby’s mother.

9 Pharaoh’s daughter said to her, “Take this baby and nurse him for me, and I will pay you.” So the woman took the baby and nursed him.

10 When the child grew older, she took him to Pharaoh’s daughter and he became her son. She named him Moses, saying, “I drew him out of the water.”

That’s the word for today. Astonishing!

Today’s text can also be filed in the folder labeled “Genesis 50:20.”

You intended to harm me, but God intended it for good to accomplish what is now being done, the saving of many lives.

In case you missed it. Pharaoh’s daughter came to the Nile to bathe. She spotted the tiny Ark of Faith, sent her slave over to investigate and just like that this infant slave, condemned to death by her Pharaoh Father, was in her arms.

It gets better. Remember big sister? We were holding her hand as she watched the baby float into the reeds. Well, Sister sidled up to Pharaoh’s daughter with a quite strategic solution:

“Shall I go and get one of the Hebrew women to nurse the baby for you?”

8 “Yes, go,” she answered. So the girl went and got the baby’s mother.

The plot keeps turning, and eases into the category of, “Truth is stranger than fiction.” You can’t make this up.

9 Pharaoh’s daughter said to her, “Take this baby and nurse him for me, and I will pay you.” So the woman took the baby and nursed him.

Pharaoh’s daughter has now agreed to pay the baby’s mother to nurse her own baby; the one she surrendered to God into the Nile in her tiny Ark of Faith just hours before. You know the word for this.

10 When the child grew older, she took him to Pharaoh’s daughter and he became her son. She named him Moses, saying, “I drew him out of the water.”

So many things could be said at this point. I will seize the moment to make this point. A choice of evils always leads to a spirit of weak resignation. The choice of greater faith always inspires a heart of strong surrender.

In an age of great confusion—with an almost constant choice of lesser evils—the tendency to succumb to weak resignation will abound. Everyone around will be doing it; giving in, giving up and giving over the dominion of truth to the spirit of the age. The seduction, of course, will be anger, outrage and fighting back. That is a trap as well. The way forward is not to battle with evil, enemies or even well-intentioned opponents who become the unwitting advocates of darkness. The way forward is to deal with God alone in the spirit of deep, strong, uncompromising surrender to him.

Moses’ parents did not succumb to the choice of evils, nor did they attempt to do battle with Pharaoh—whom they did not fear. Instead, they made a deeper surrender to God.

What Pharaoh intended for evil, God turned into good. Through these two exceedingly obscure and unimportant people at this very obscure moment in the history of the world we get one of the most famous people who ever lived: Moses, the one drawn up out of the water.

Remember that the next time you think your choice or your voice or your courageous action doesn’t matter.

Remember that in the present struggle in your own life, the one that has you tired beyond tired and ready to quit. Don’t give up or give in to weak resignation. Surrender to Jesus. He’s right here, right now.

Father, I want to be a person who says such things. Thank you for this astonishing true story. You inspire courage and obedience in me. Teach me the way of the choice of greater faith in the little things and in the seemingly small ways; when no-one is looking. Orient my mind and heart directly to you and not to the need to impress or appease others. I confess my own tendency toward weak resignation. Train my heart to walk in this way of deep surrender to you alone. Come Holy Spirit, and train me be such a person of faith. I pray in Jesus name, Amen.

Are you astonished by this story today? How are you inspired to renounce the spirit of weak resignation to your circumstances and to surrender to God in bold faith?