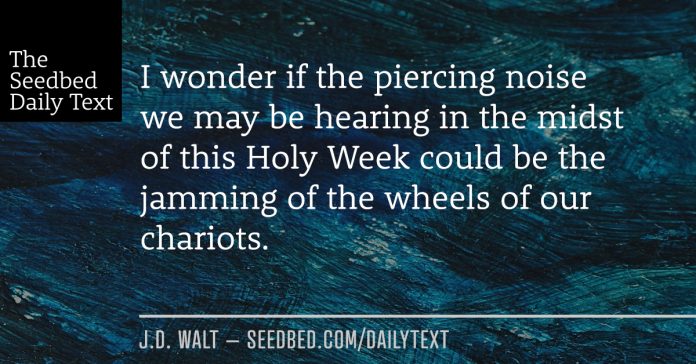 23 The Egyptians pursued them, and all Pharaoh’s horses and chariots and horsemen followed them into the sea. 24 During the last watch of the night the Lord looked down from the pillar of fire and cloud at the Egyptian army and threw it into confusion. 25 He jammed the wheels of their chariots so that they had difficulty driving. And the Egyptians said, “Let’s get away from the Israelites! The Lord is fighting for them against Egypt.”

As you might imagine, I get a fair amount of reader mail. Most of it is encouragement, for which I am grateful. Sometimes a reader takes issue with something I have written, which I appreciate and try to respond to. Often I get questions.

Today I received this question. “Why did the Egyptian Army enter the ‘water trap’ when its occurrence obviously defied all laws of physics?”

Here is my initial response: “Blood lust, greed, and the maintenance of their own Kingdom and way of life. The slaves were their Dow Jones Industrial average.”

Life really comes down to such a simple choice. Sometimes it takes a plague or ten to bring it to such clarity. The rest of the time it can be so many shiny things whirring around our heads and filling up our phones. For so many, it’s coffee in the morning and wine at night and a long day’s labor between to get to the next income bracket with better schools, nicer vacations, and richer retirement accounts. We live from deer season to turkey season, from the Super Bowl to the World Series, from Augusta National to the Final Four. And to be clear, none of these things are bad at all. They are good, yet they can keep us in such a state of constant distraction and preoccupation we miss the real point and purpose of our one life. Coffee and beer; lunch and supper; Saturday and Sunday; and where on Earth is God in all of that?

Thoreau put it this way: “Most people lead lives of quiet desperation, and they go to the grave with the song still in them.” Pascal said it thus, “We run heedlessly into the abyss after putting something in front of us to stop us from seeing it.” Most don’t realize it until they are miles into the Red Sea, chasing after a mirage, surrounded by water walls threatening to become water falls.

Jesus said it so decisively and clearly. “Seek first the Kingdom of God and his righteousness and all these things will be added unto you.” For so many church-going (or at least church-saluting) Christians, it can be more like, “Seek all these things, ask for God’s help to get them, and consider yourself blessed by God when they come. And the Kingdom of God and his righteousness will be added unto you.” It is the peak of deception. God and the things of God occupy such a small compartment in far too many lives. Church fills such a stale, stifling, and predictable category. When will we finally wake up? The thing we must come to crave in these days of chaos is the gift of clarity. This is a moment for deep soul clarity.

It brings me no pleasure to say things like this, and yet it gives me the hope of joy that some will wake up and look up and light up to the life they were made for. It won’t mean giving up everything you enjoy—not for a minute. It will mean something infinitely greater to live for. That is awakening. And it’s never too late. Jesus—not stale religion, not a caricature of church, not self-righteous pompous asses; just Jesus—he’s better than the best.

I wonder if the piercing noise we may be hearing in the midst of this Holy Week could be the jamming of the wheels of our chariots.

Father, I want to be a person who says such things. I want you to forgive me for being the kind of person at times who makes people want to run away from Jesus. I confess I can be more concerned about the stock market than the souls of my friends and neighbors. I pray for awakening in these days where everything is so different. I pray for awakening in myself; to come alive to ultimate things; to more of you, to what life is really for and about. Come Holy Spirit, and train me to be such a person of faith. I pray in Jesus name, Amen.

So if I’ve offended you today, will you forgive me? And will you ask yourself why you were offended?