People Who Say Such Things: Do Not Choose the Lesser of Two Evils - Seedbed
close
Menu 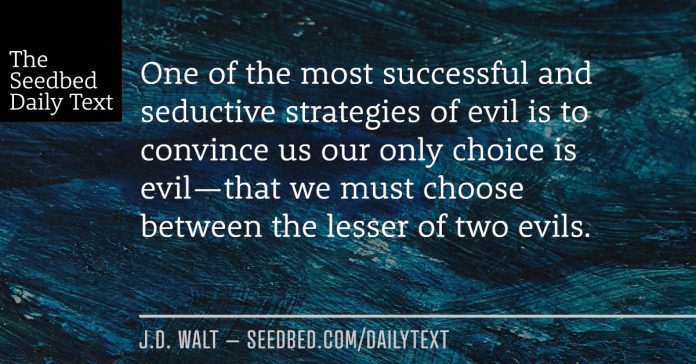 Now a man of the tribe of Levi married a Levite woman, 2 and she became pregnant and gave birth to a son. When she saw that he was a fine child, she hid him for three months. 3 But when she could hide him no longer, she got a papyrus basket for him and coated it with tar and pitch. Then she placed the child in it and put it among the reeds along the bank of the Nile. 4 His sister stood at a distance to see what would happen to him.

Get a picture in your mind of hundreds of young men carrying their infant sons in their arms, walking out to the river bank of the Nile and throwing their sons into the river to drown. I’m sorry to even ask you to see such a sight. It happened. This is the world we live in.

I mean, what were they supposed to do? Yesterday, I failed to point out how Pharaoh instituted another infanticidal law:

22 Then Pharaoh gave this order to all his people: “Every Hebrew boy that is born you must throw into the Nile, but let every girl live.” Exodus 1:22.

It is a choice of evils. Do the parents suffer the death of their child or should they risk being caught at which point they would lose not only he child but perhaps the mother and father too as a punishment; or maybe even the rest of the children? We are dealing with pure evil here.

One of the most successful and seductive strategies of evil is to convince us our only choice is evil—that we must choose between the lesser of two evils. I struggle to admit it, because I know just how real the choice of evils dilemma can be, but to choose the lesser of two evils is still to choose evil. I am coming to believe the choice of evils “defense” as it is called, (because it is a way of defending one’s evil choices) is not so much a logical fallacy for Christians as it is a theological fallacy. Why? Because with God, there must always be another option. While it may not always seem like a “good” alternative, it must be a non-evil option. That’s what we see in today’s text.

When she saw that he was a fine child, she hid him for three months.

They saw the inestimable potential in the life of a child given by God. Something in them knew this child belonged to God. But doesn’t every parent see a “fine child” when they look at a newborn? Something about the vision of these parents was different. It’s a good word to us parents—we must ask God to grant us the vision to see our children as he sees them. They refused to kill their baby boy. They knew there must be another way.

3 But when she could hide him no longer, she got a papyrus basket for him and coated it with tar and pitch. Then she placed the child in it and put it among the reeds along the bank of the Nile.

This choice was mortifying yet it was creative and full of love and care. Their choice created the possibility of something different happening; something new and unexpected. Sure, it was fraught with peril, but it was not a lesser of evils choice. It was a choice of greater faith—one that extended life as far as they possibly could—a choice creating the opportunity for all the unpredictable possibilities of God to work.

One of the dark strategies of the spirit of the age of the great confusion in which we live is to bully God-fearing citizens of the Kingdom into an ever evolving choice of evils dilemma. We must come to grips with the truth: Beneath the choice of evils scenario is a choice of fears. Who will we fear more: evil or God? We agreed last week in Psalm 23 that the fear of evil is the path of destruction. When we fear evil we invariably resort to choosing the lesser of evils. When we fear God, we resist evil, and we choose the way of greater faith—the way most often invisible to the naked eye. Note the plaque on the wall of the celebrated Hall of Faith:

“By faith Moses’ parents hid him for three months after he was born, because they saw he was no ordinary child, and they were not afraid of the king’s edict.” Hebrews 11:23

Let’s pause here on the bank of the Nile as the tiny Ark of Faith floats into the water’s current, carrying an infant slave condemned to death, carrying all the hopes of the future of the Kingdom of God. We will take big sister’s hand as we watch.

4 His sister stood at a distance to see what would happen to him.

Father, I want to be a person who says such things. Grant me courage, Lord, to not only resist evil but to rebuke the ever so reasonable invitation to choose evil under the auspices of it somehow ever being lesser. This seems impossible in this world and yet nothing is impossible with you. I know the choice of greater faith will come at a cost to myself, my reputation, and my respectability. I declare in faith, I fear no evil. I fear God. And even more, I love you, God. Come Holy Spirit, and train me be such a person of faith. I pray in Jesus name, Amen.

Where does your mind run in a practical way as it comes to being pressed into choosing the lesser of two evils? Can you see where you have succumbed to it in the past? What will it take to leave that whole paradigm behind and shift into the choice of the greater alternatives of faith?