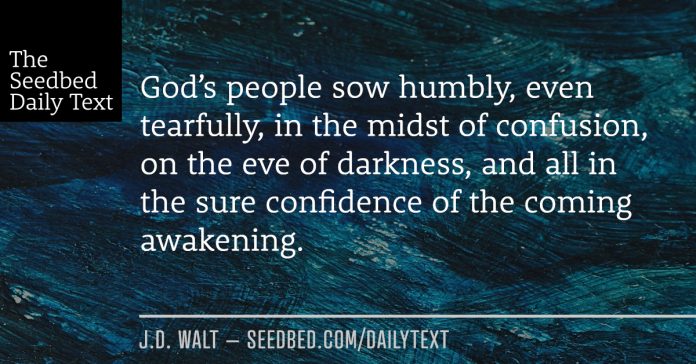 19 The midwives answered Pharaoh, “Hebrew women are not like Egyptian women; they are vigorous and give birth before the midwives arrive.”

20 So God was kind to the midwives and the people increased and became even more numerous. 21 And because the midwives feared God, he gave them families of their own.

22 Then Pharaoh gave this order to all his people: “Every Hebrew boy that is born you must throw into the Nile, but let every girl live.”

Coming back around to our “People who say such things” storyline, we find ourselves in the epic story of Exodus. Eight verses in we get this fateful word:

Then a new king, to whom Joseph meant nothing, came to power in Egypt. Exodus 1:8.

Everything changed. Enter cruel slavery. Enter genocide. The Israelites went from great favor to grave fear in the span of days. Life can be like that. It’s why we do not trust in the temporality of prosperity. Everything can change, literally overnight. We trust God. Pandemics come and go. Stock markets rise and fall. Fortunes are won and lost. Nations flourish and collapse. The God of Israel who is the Father of our Lord Jesus Christ never fails.

15 The king of Egypt said to the Hebrew midwives, whose names were Shiphrah and Puah,

Fascinating! The king of Egypt is speaking to the Israelite midwives. You read the text. He’s ordering the midwives to murder the boy babies immediately upon their birth. Then we get this bit:

17 The midwives, however, feared God and did not do what the king of Egypt had told them to do; they let the boys live.

The midwives knew the King’s word was law, but they knew even more that God’s Word is truth. And they knew they dare not disobey God in the interest of appeasing Pharaoh. They feared God more than they feared man. Sometimes obedience to the Word of God must mean defiance of the laws of Pharaoh.

19 The midwives answered Pharaoh, “Hebrew women are not like Egyptian women; they are vigorous and give birth before the midwives arrive.”

History is replete with examples of fearful rulers, unjust laws, and oppressive rulings resulting in disastrous outcomes for human beings. Dred Scott v. Sandford, Korematsu v. United States, Roe v. Wade, Obergefell v. Hodges all come to mind. (Guess you can take the lawyer out of the courtroom, but . . .) We now live in an age of the great confusion; a day when things long settled are undone; when eternal verities are discarded with the stroke of a pen. It will undoubtedly be followed by an age of great darkness and brokenness. Those who sow into the wind reap the whirlwind. The good news, though, is the great darkness will be followed by a great awakening, the likes of which has not been seen in centuries.

The secret to a great nation is not so much in its leaders, be they presidents, legislators or judges. The secret is in the God-fearing, faith-filled citizens of the Kingdom who are not afraid to defy the dictates of the cultural elite and the avant-garde trends of the spirit of the age; especially as it comes to the enormous cost it will mean for human beings when the Word of God is defied. They do so by humbly sowing, even tearfully, in the midst of confusion, on the eve of darkness and all in the sure confidence of the coming awakening.

Thank God for Shiphrah and Puah, those courageous Israelite midwives. They get far more than honorable mention in the history books. They turn out to be the history makers. They always do. May their tribe increase.

And come to think of it, what was that King of Egypt’s name?

Father, I want to be a person who says such things. I want to be humble and yet courageous. I renounce the spirit of the age and I stand on the Word of God. Transform my anger at all the confusion around us into a holy lament. And transform my malcontent with the problems around me into a holy discontent with the problems within me. My hope is not in political leaders, though I pray for them. My hope is in Jesus Christ and his coming Kingdom. Today, I sow for a great awakening. Come Holy Spirit, and train me to be such a person of faith. I pray in Jesus name, Amen.

How might we resist the spirit of the age, not with our anger and outrage, but in the power of the Holy Spirit with humility and courage?