People Who Say Such Things: Have Audacity - Seedbed
close
Menu 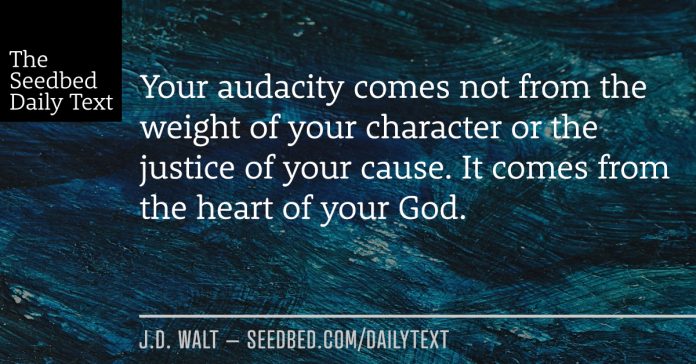 That’s the word. It means someone who is so bold in their approach they are willing to risk causing offense. Yesterday we witnessed Abraham’s incredulity. Today we see his audacity.

Catching up with the storyline—Abraham received a visit from three strangers, who carried the character of angelic beings in the appearance of men. They announced the coming of the promised son to Abraham and Sarah. Afterward they headed on to their next assignment, which included the complete and utter destruction of Sodom and Gomorrah.

The Lord decided to confide their mission to Abraham. We enter in two verses prior to today’s text at v.20:

20 Then the Lord said, “The outcry against Sodom and Gomorrah is so great and their sin so grievous 21 that I will go down and see if what they have done is as bad as the outcry that has reached me. If not, I will know.” Genesis 18:20-21

Here’s where Abe gets audacious.

23 Then Abraham approached him and said: “Will you sweep away the righteous with the wicked?

That’s bold. Who does that? This is the LORD he addresses. This is the same guy who tried to pass off his wife as his sister in order to save his own bacon—which raises another good point. We are all in process; an inconsistent mix of magnificence and mess. Anyway, back to Abraham. He knew his nephew Lot and their whole clan were in imminent danger, so he intervened. Better yet—he interceded. That may be the better word. He stood before the God of Heaven and Earth on behalf of Lot.

Three questions and counting. Abraham appeals to God on the basis of God’s character.

God called his bluff and agreed to save the cities for fifty righteous souls. Small problem. Abraham was bluffing. He knew fifty was a pipe dream. Abe’s audacity goes to the next level.

27 Then Abraham spoke up again: “Now that I have been so bold as to speak to the Lord, though I am nothing but dust and ashes, 28 what if the number of the righteous is five less than fifty? Will you destroy the whole city for lack of five people?”

People who say such things possess an audacity beyond activism. Your audacity comes not from the weight of your character or the justice of your cause. It comes from the heart of your God.

Father, I want to have this kind of audacity yet I fear any boldness I may have is generated by my own force of personality or personal conviction. I know I am mere dust. And yet I know you. I want to learn to pray not on the strength of my sincerity but on the basis of your character. Show me how to pray with audacity on the basis of who you are rather than on the intensity (or lack thereof) of who I am. Come Holy Spirit, and train me to be one of these kind of people. I pray in Jesus name, Amen.

How might this kind of audacity change your approach to speaking with God about difficult situations in your life and in the world around us?

P.S. O.K. Sowers, today is the last day of the SOWERS SPECIAL on the First Word—Last Word—God’s Word book. Purchase 5 copies and get them and as many more as you like at 50% off. Sharing a copy with a colleague, friend or family member is a perfect way to invite them into our Daily Text Community. I will include such an invitation in the book—as well as an explicit invitation to follow Jesus.