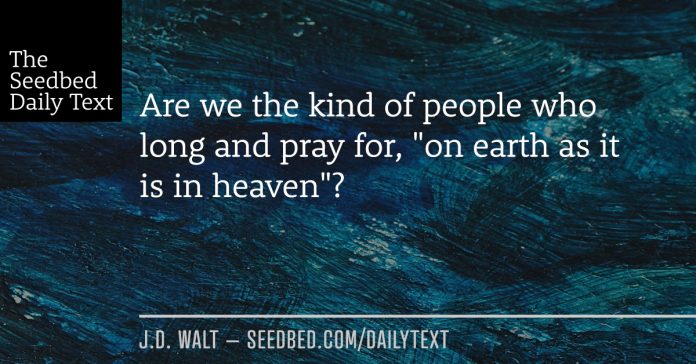 All these people were still living by faith when they died. They did not receive the things promised; they only saw them and welcomed them from a distance, admitting that they were foreigners and strangers on earth. 14 People who say such things show that they are looking for a country of their own. 15 If they had been thinking of the country they had left, they would have had opportunity to return. 16 Instead, they were longing for a better country—a heavenly one. Therefore God is not ashamed to be called their God, for he has prepared a city for them.

People who say such things. . . It’s a brilliant turn of phrase.

But it begs the question. People who say what things? Who are these people? And what such things are they saying?

Hebrews 11 gives us a thumbnail sketch of these kinds of people, but this banner could be lifted up over the entirety of Scripture. Who are these people and what things do they say and do that distinguishes them from everyone else? These are our people. Over these next few weeks leading to Ash Wednesday we will begin what, over time, will be a longer series of explorations into these sorts of people. Here are just a few examples:

16 But Ruth replied, “Don’t urge me to leave you or to turn back from you. Where you go I will go, and where you stay I will stay. Your people will be my people and your God my God. 17 Where you die I will die, and there I will be buried. May the Lord deal with me, be it ever so severely, if even death separates you and me.” (Ruth 1:16-17)

In her deep anguish Hannah prayed to the Lord, weeping bitterly. 11 And she made a vow, saying, “Lord Almighty, if you will only look on your servant’s misery and remember me, and not forget your servant but give her a son, then I will give him to the Lord for all the days of his life, and no razor will ever be used on his head.” (1 Samuel 10-11)

Shadrach, Meshach and Abednego replied to him, “King Nebuchadnezzar, we do not need to defend ourselves before you in this matter. 17 If we are thrown into the blazing furnace, the God we serve is able to deliver us from it, and he will deliver us from Your Majesty’s hand. 18 But even if he does not, we want you to know, Your Majesty, that we will not serve your gods or worship the image of gold you have set up.” (Daniel 3:16-18)

20 I have been crucified with Christ and I no longer live, but Christ lives in me. The life I now live in the body, I live by faith in the Son of God, who loved me and gave himself for me. (Galatians 2:20)

And what of these people? Today’s text goes on to say of them:

Instead, they were longing for a better country—a heavenly one. Therefore God is not ashamed to be called their God, for he has prepared a city for them.

People who say such thing have come to a place of holy discontent. They can’t accept the gap between what Scripture says and the way things are. They have made the shift from being dissident malcontents who always see the problems as being “out there,” to being holy discontents who are willing to look within and understand how they are part of the problem. They can’t accept the mess in the world nor in their own lives.

Our only question is will we become these kind of “people who say such things” in our lifetime? I want to, and my hunch is you do too.

Father, I don’t want to be a complaining malcontent about all the problems in the world around us. I want to become a holy discontent, ready to deal with the gap between your dream for me and my present reality. Thank you for working by grace through faith and not though criticism and condemnation. I want to become a person who lives in the world as a citizen of your Kingdom. Come Holy Spirit and lead the way as the Word of God unfolds the vision. I pray in Jesus name, Amen.

Where do you rate yourself on the scale holy discontent with 0 being indifferent and 10 being intolerant of the gap between the vision of God for my life and the reality? Not what do you want the number to be, but what it actually is.

P.S. So many of you have inquired as to whether we will publish the First Word-Last Word-God’s Word Daily Text series into a book. YES WE WILL! We are a sowing operation and therefore want to get this material into seed form. Because you are our primary sowers, here’s the offer: Purchase 5 copies and get them and as many more as you like at 50% off. Sharing a copy with a colleague, friend or family member is a perfect way to invite them into our Daily Text Community. I will include such an invitation in the book—as well as an explicit invitation to follow Jesus.