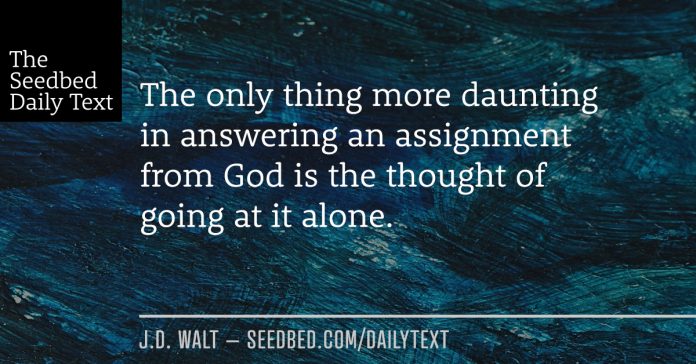 14 Then the Lord’s anger burned against Moses and he said, “What about your brother, Aaron the Levite? I know he can speak well. He is already on his way to meet you, and he will be glad to see you. 15 You shall speak to him and put words in his mouth; I will help both of you speak and will teach you what to do. 16 He will speak to the people for you, and it will be as if he were your mouth and as if you were God to him. 17 But take this staff in your hand so you can perform the signs with it.”

Did you realize Moses never actually said yes to God? He politely declined in v.13, and then we get today’s text. Moses never responded positively. You know who did? Aaron. Aaron said yes, and Moses joined him. The next thing we hear is this:

Then Moses went back to Jethro his father-in-law and said to him, “Let me return to my own people in Egypt to see if any of them are still alive.” 4:18

Moses did not lead. He followed Aaron. In truth, they followed each other in their pursuit of the God who called them. That’s how it works in God’s Kingdom. You remember the Hall of Justice and the Super Friends. We have the hall of faith and the Kingdom Friends. In a Kingdom Friendship there is no hero because they keep trading the lead. Each hides himself in the other.

It wasn’t God’s calling that elicited Moses’ yes. It was Aaron’s obedience to God. The only thing more daunting in answering an assignment from God is the thought of going at it alone. And the truth? God never intends for us to go at it alone. He wants us banded together with brothers and sisters, sharing in the bonded fellowship of the Holy Spirit, encouraging one another, blessing one another, speaking grace and truth to one another, calling out the best in one another, bearing one another’s burdens and so fulfilling the law of Christ. In summary, he wants us banded together in ways where we can learn to actually become the love of God for each other. And when we become the love of God for one another, it changes the world.

As God chose the brothers, Moses and Aaron, Jesus chose two sets of brothers as his first four disciples. Peter and Andrew and James and John. I think of David and Jonathan, Ruth and Naomi, Paul and Barnabas, Mary and Elizabeth; all exemplars of the way God prefers banded friendships to lone rangers. And who would the Lone Ranger have been without his trusted Tonto? From Frodo and Sam in the Lord of the Rings to Napoleon and Pedro in Napoleon Dynamite to Butch Cassidy and Sundance to Thelma and Louise—all the great stories are stories of banded friendships.

27 The Lord said to Aaron, “Go into the wilderness to meet Moses.” So he met Moses at the mountain of God and kissed him. 28 Then Moses told Aaron everything the Lord had sent him to say, and also about all the signs he had commanded him to perform. 4:27-28

Imagine the excited relief of the both of them as they stood there at the mountain of God in a brotherly embrace, comparing notes of their respective God stories. They were doing the stuff—together!

Sadly, this is not so common in today’s world. Most of us suffer from the syndrome: “Too many acquaintances; not enough friends.” We find ourselves in community groups and bible studies yet hungering for the deeper bonds that characterize the band of Jesus.

Two things he said that live together at the core of my being. They are my passion.

1.  Very truly I tell you, whoever believes in me will do the works I have been doing, and they will do even greater things than these, because I am going to the Father. (John 14:12)

I’m not talking about BFF’s or Christian cliques or holy huddles. It is banded discipleship—simultaneously the most transformational and missional thing we can do, and it’s the secret sauce of Great Awakening.

“I no longer call you servants,” Jesus said, “Instead I have called you friends.” I am coming to the crystallized conviction that you can’t be a friend of Jesus unless you are a friend of the friends of Jesus.

I’m going to invite you in the P.S. below to take an exploratory step with me. Some of you, maybe a lot of you, will take me up on it. I am praying so. Give me a shot.

Without Aaron wouldn’t have Moses.

Father, I want to be a person who says such things. I want be a friend of the friends of Jesus. I don’t want to just be a sheep that gets fed. I want obey the command of Jesus to “Feed my sheep.” I don’t know how or who or anything else really but I know I want more of Jesus in my life and I am becoming convinced I can only find that in the deeper bonds of banded discipleship. Come Holy Spirit, and train me to be such a person of faith. I pray in Jesus name, Amen.

Do you have any “Kingdom Friends?” Are you ready to at least explore the realm of banded discipleship?

If I’m talking to you (and I know I am), and you have a little free time next week, take a step of exploration with me into the possibility of the most life changing decision you have made in years. Click here and give me your name and email address and I’ll be in touch. The only cost is a little bit of faith.