People Who Say Such Things: Show Us What Awakening Looks Like - Seedbed
close
Menu 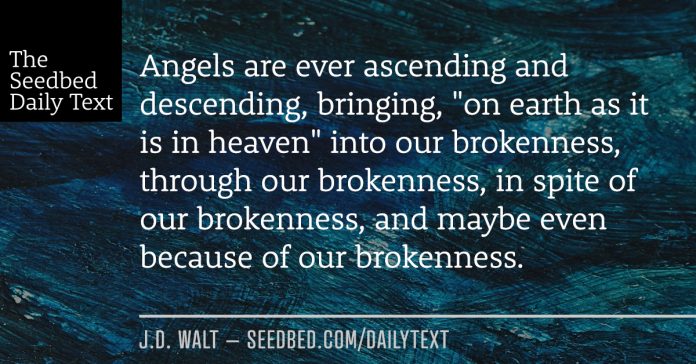 16 When Jacob awoke from his sleep, he thought, “Surely the Lord is in this place, and I was not aware of it.” 17 He was afraid and said, “How awesome is this place! This is none other than the house of God; this is the gate of heaven.”

18 Early the next morning Jacob took the stone he had placed under his head and set it up as a pillar and poured oil on top of it. 19 He called that place Bethel, though the city used to be called Luz.

20 Then Jacob made a vow, saying, “If God will be with me and will watch over me on this journey I am taking and will give me food to eat and clothes to wear 21 so that I return safely to my father’s household, then the Lord will be my God 22 and this stone that I have set up as a pillar will be God’s house, and of all that you give me I will give you a tenth.”

After some pretty dysfunctional parenting, followed by sibling rivalry, significant intrigue, deception, and even betrayal, we come to today’s text. If you need to catch up with the plot line, start reading at Genesis 25:19.

Jacob was something of a hustler, if not a con artist, by this point. He had acquired his brother’s birthright, and now through the intrigue of his mother and his willing compliance he had managed to steal his older brother’s blessing from Isaac. Jacob was a striver and a struggler. He always grasped for the advantage, fair or not. He wanted the edge. What this tells me is he wanted the goods without the God. He trusted himself, his will, and his ways rather than God’s ways. Though he must be held responsible for his broken character, he can’t be blamed. He came by it honestly.

We all do. No matter how blessed and beautiful our families may be, they are all broken. We all carry the cancer of sin and death (see Genesis 3) in our souls, and we don’t have to traverse far through our lineage to see where and how it metastasized through the generations. One generation fights a war and the next carries the wounds. Three generations later the fear and anxiety surges, stealing peace while securing a broken prosperity. The feuds of rivalrous brothers and jealous sisters can carry on for years and poison the wells for generations to come. The only real difference in families is the accrued wealth with which they can conceal the fault lines of their broken bonds, run from their pain, and medicate their problems.

In the midst of such a twisted plot we learn a priceless truth from Jacob. As he ran into exile from his angry brother Esau, he was found by God. History calls the story, “Jacob’s Ladder.”

12 He had a dream in which he saw a stairway resting on the earth, with its top reaching to heaven, and the angels of God were ascending and descending on it. 13 There above it stood the Lord, and he said: “I am the Lord, the God of your father Abraham and the God of Isaac. I will give you and your descendants the land on which you are lying.

Notice the stunning scope of the goodness and blessing of God, in spite of the brokenness of Jacob:

14 Your descendants will be like the dust of the earth, and you will spread out to the west and to the east, to the north and to the south. All peoples on earth will be blessed through you and your offspring. 15 I am with you and will watch over you wherever you go, and I will bring you back to this land. I will not leave you until I have done what I have promised you.”

Now hear what he said:

“Surely the Lord is in this place, and I was not aware of it.”

17 He was afraid and said, “How awesome is this place! This is none other than the house of God; this is the gate of heaven.”

It reminds of the words to the popular song by Corey Asbury: “O the overwhelming, never ending, reckless love of God. O it chases me down, fights till I’m found, leaves the ninety-nine.”

People who say such things show us what awakening looks like.

Father, I want to be a person who says such things. I can be such a striver and a grasper. My own insecurities hold you at bay as I work so hard to hold it all together. In the process my own brokenness unwittingly breaks those around me. Forgive me. Wake me up to this reality: “Surely the Lord is in this place, and I was not aware of it.” Wake me up Lord, and nothing I have lost will be lost any longer, and though it be nothing compared to the surpassing greatness of knowing your Son, Jesus, all I have gained will be yours.  Come Holy Spirit, and train me be such a person of faith. I pray in Jesus name, Amen.

“Surely the Lord is in this place, and I was not aware of it.” Have you experienced such an awakening in your life? Could it be unfolding now? Have you seen it in the lives others? Remember and reflect . . . and rejoice!

© Seedbed 2021
People Who Say Such Things: Show Us What Awakening Looks Like
MORE STORIES