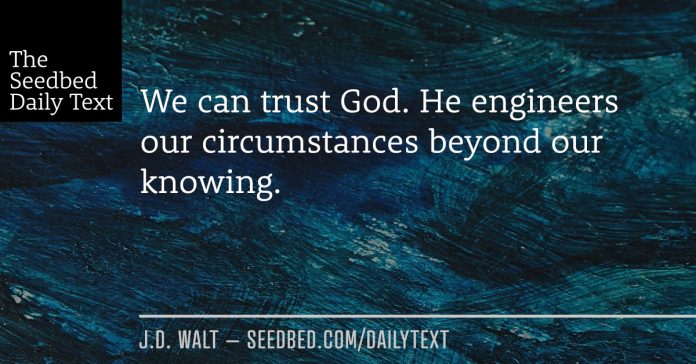 17 When Pharaoh let the people go, God did not lead them on the road through the Philistine country, though that was shorter. For God said, “If they face war, they might change their minds and return to Egypt.” 18 So God led the people around by the desert road toward the Red Sea. The Israelites went up out of Egypt ready for battle. . . .

We’ve all heard the cliche bandied about that God doesn’t give us anything he knows we can’t handle. I’ve never given it much credence and pretty much filed it in the folder that holds other so-called biblical sayings that aren’t in the Bible—like, “God helps those who help themselves.” I’ve never actually seen this cliche in the Bible about God not giving us more than we can handle—until today.

When Pharaoh let the people go, God did not lead them on the road through the Philistine country, though that was shorter. For God said, “If they face war, they might change their minds and return to Egypt.”

I bet they were furious. After all they had been through with the bricks without straw program and the ten plagues and the bloody lambs and the sudden departure—at night—with all the kids and the sheep and cows and everything else. Why on earth would they take the long way around the bend at a time like this? Can you imagine the arm-chair quarterbacking cycling through the ranks? Did Moses just not know the shortcut? Did he think they couldn’t defeat the Philistines? After all, the text tells us they left Egypt, “ready for battle.” To the average Israelite, the whole thing must have felt very questionable. Truth be told, the plan would soon go from questionable to certifiably insane.

God knew. He knew what they could handle and what they could not handle. God knew the mileage differential between the two routes. He knew the soldier count in the Philistine armies and he knew what the Israelite body count would be on the other side of a battle. He knew they would be ready to turn around and go back to Egypt, settle back into their slavish existence and count it all as a bad dream. God chose not to give them more than he knew they could handle.

Instead, he would take them by a longer route in a way that felt like lost wandering only to arrive at a dead end and their impending doom. God knew they could handle this; perhaps because it would put them in the kind of impossible situation from which only God could save them. Isn’t that how it goes.

We can trust God. He engineers our circumstances beyond our knowing. Often it will not make sense to us at the time. At times, it will seem like the worst possible thing has happened; that we have gone from bad to worse, from lost to hopeless. Our prayers seem to bounce off the ceiling. God has a higher plan; a better plan, with endless contingencies, and everything can ultimately be worked together for our good and God’s glory. Keep on trusting. Cloud by day. Fire by night. Never give up. Death on Friday. Resurrection on Sunday.

So God led the people around by the desert road toward the Red Sea.

Though I feel lost and in the valley of the shadow of death, yet I will trust him.

Father, I want to be a person who says such things. I confess I wonder at your ways and I second guess your plans. The better way seems so clear to me yet I know your ways are higher and better than mine. You see the end from the beginning. You see the things that are not as though they were. I am so tempted by the shorter route and the easier way. Teach me to trust the long road and to know you will not give me more than I can bear. Come Holy Spirit, and train me to be such a person of faith. I pray in Jesus name, Amen.

Have you witnessed or experienced a situation that didn’t make sense at all but that later worked itself into unforeseeable redemptive outcomes? Are you in such a situation now that has yet to resolve into any form of redemption?