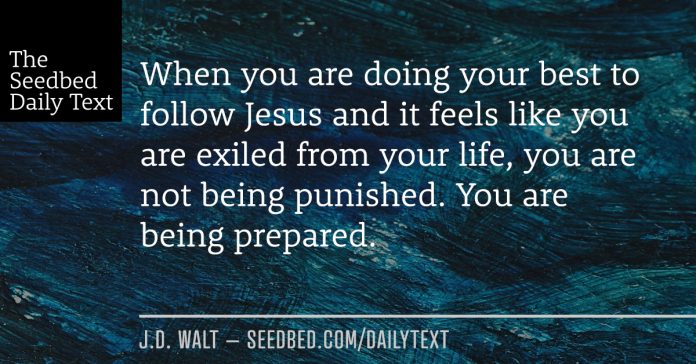 16 Now a priest of Midian had seven daughters, and they came to draw water and fill the troughs to water their father’s flock. 17 Some shepherds came along and drove them away, but Moses got up and came to their rescue and watered their flock.

18 When the girls returned to Reuel their father, he asked them, “Why have you returned so early today?”

19 They answered, “An Egyptian rescued us from the shepherds. He even drew water for us and watered the flock.”

20 “And where is he?” Reuel asked his daughters. “Why did you leave him? Invite him to have something to eat.”

21 Moses agreed to stay with the man, who gave his daughter Zipporah to Moses in marriage. 22 Zipporah gave birth to a son, and Moses named him Gershom, saying, “I have become a foreigner in a foreign land.”

23 During that long period, the king of Egypt died. The Israelites groaned in their slavery and cried out, and their cry for help because of their slavery went up to God. 24 God heard their groaning and he remembered his covenant with Abraham, with Isaac and with Jacob. 25 So God looked on the Israelites and was concerned about them.

Life is what happens when you are making other plans.

Moses’ life seems to have taken a detour. The text describes this season of Moses’ life as a “long period.”

He thought he did the right thing back in Egypt in coming to the defense of an Israelite slave. No sooner than he left Egypt he found himself in another confrontation with a group of rogue shepherds trying to attack a band of seven defenseless sisters. Moses is a good egg, but he is lost, and life goes on. Though good things happen to him, including finding a wife and having a son, he still finds himself in exile. The name he gave his son tells the story:

Zipporah gave birth to a son, and Moses named him Gershom, saying, “I have become a foreigner in a foreign land.”

He must have wondered to himself, why this? Am I being punished? What did I do wrong? He had been exiled twice; first from his own people, the Israelites, and then from his adopted people, the Egyptians. He had gone from the privilege of the palace to herding sheep in Midian. Gershom says it all:

Have you ever felt exiled from your life; stuck in a moment you can’t get out of? Things are not turning out like you planned. Something or someone intervenes in your best laid plans and a promising path turns toward what seems to be an endless exile. Where did I go wrong, you ask yourself. You find yourself saying things like,

Here’s the good news. When you are doing your best to follow Jesus and it feels like you are exiled from your life, you are not being punished. You are being prepared.

At the same time Moses is wondering aloud about what happened to his best life, another conversational drama is playing out a hundred miles away—as in, “Meanwhile, back at the ranch. . .”

23 During that long period, the king of Egypt died. The Israelites groaned in their slavery and cried out, and their cry for help because of their slavery went up to God. 24 God heard their groaning and he remembered his covenant with Abraham, with Isaac and with Jacob. 25 So God looked on the Israelites and was concerned about them.

In times like these, we must exchange the “why me” question for the “why this” inquiry. We must turn out the lights on our pity party and open our hearts to the curriculum of circumstances through which God is preparing us for a future season we cannot yet see, much less imagine.

It may be a lot closer to home than we realize.

Feels like a good place to leave it today. See you Monday on the far side of the wilderness.

Father, I want to be a person who says such things. Thank you for all the ways you take hardships and difficult circumstances and weave them into your plan for my good. Because of this I can thank you for even the hardest of times. I offer up my circumstances, turning away from my victimhood, my bitterness, and even letting go of my own dreams and best laid plans. I trust you and because I trust you I trust your path. You are the God who can turn lost into found and exile into home. Prepare me, Lord. Prepare me. Come Holy Spirit, and train me be such a person of faith. I pray in Jesus name, Amen.

How about it? Ever felt exiled from your life? Maybe even now? How might you make the turn toward trusting God to do something new in the midst of it? What might that look like?