People Who Say Such Things: Understand the Wrath of God - Seedbed
close
Menu 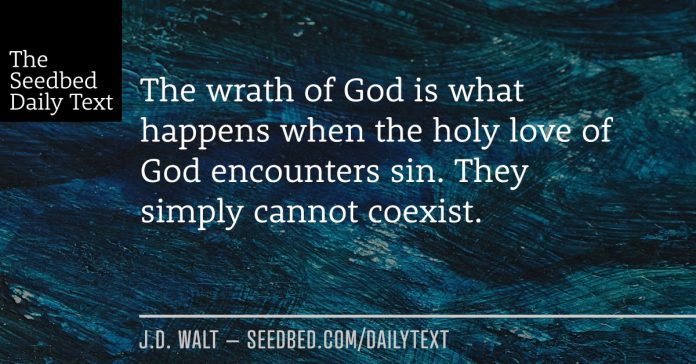 Then the Lord said to Moses, “Stretch out your hand over the sea so that the waters may flow back over the Egyptians and their chariots and horsemen.” 27 Moses stretched out his hand over the sea, and at daybreak the sea went back to its place. The Egyptians were fleeing toward it, and the Lord swept them into the sea. 28 The water flowed back and covered the chariots and horsemen—the entire army of Pharaoh that had followed the Israelites into the sea. Not one of them survived.

There is so much to deal with in all of these texts with Moses, Pharaoh, the Israelites, the Egyptians, the sea and the wind. It is so easy to get lost in the details; to become preoccupied with the faith of Moses, the fear of the Israelites, the hard-heartedness of Pharaoh and so on. We can draw lessons about fear, faith, obedience and rebellion until the cows come home. We can walk around the burning bush a thousand times, get a different life application each time, and still miss the whole point of the whole thing.

This story and these stories are meant to do one thing and one thing alone: to reveal the God of Heaven and Earth. I am convicted at just how easy it can be to deal with everything else in the text but God. It can all be so interesting and helpful and meaningful and yet stultifyingly trifling. Isn’t that a great word by the way—stultifyingly!

In today’s text we are drawn to the awe inspiring sovereignty of Almighty God. We see both the unity and integrity of God’s character in two very different expressions and outcomes that are really only one thing. We see the love of God on full display, delivering the Israelites through the Red Sea. And at the same time, we see the wrath of God, bringing the Egyptians to utter ruin and desolation. For my money, the most powerful words in today’s text are these: the Lord swept them into the sea. The same waters through which Israel was delivered proved to be the death of the Egyptians. The same God brings deliverance and doom through the same act at the same time. The love of God is the wrath of God. They cannot be separated or divided as they are seamless dimensions of the same whole.

Allow me to correct a common misconception at this point. People don’t like to deal with the idea of the wrath of God. This is largely so because they associate the concept of wrath with some angry man in their past. The wrath of God must not be equated with the anger of God as though wrath were some kind of divine emotional response. The wrath of God is simply the effect of his nature on all who are unprepared for his unmitigated presence. The wrath of God is what happens when the holy love of God encounters sin. They simply cannot coexist.

Consider the image of fire. Fire either burns or refines; it destroys or purifies. The outcome depends not on the nature of the fire but on the properties of the substance entering the flames. Straw will fare quite differently than steel. Interestingly, the writer of Hebrews reminds us, “for our ‘God is a consuming fire.'” Hebrews 12:20. It’s why earlier the same writer warns, “It is a dreadful thing to fall into the hands of the living God.” Hebrews 10:31

The wrath of God is effect of the holy love of God on sin.

It is why the Gospels all begin with John the Baptist preaching a baptism of repentance from sin, with the stark warning, “You brood of vipers! Who warned you to flee from the coming wrath?” Luke 3:7

Paul makes this profoundly clear in his letter to the Roman Christians:

The wrath of God is being revealed from heaven against all the godlessness and wickedness of people, who suppress the truth by their wickedness. Romans 1:18.

Paul goes on to make clear, “For all have sinned and fall short of the glory of God. Romans 3:23

And this sets the stage for the merciful miracle of the Gospel of Jesus Christ. Paul goes on with his proclamation:

But God demonstrates his own love for us in this: While we were still sinners, Christ died for us. Since we have now been justified by his blood, how much more shall we be saved from God’s wrath through him! Romans 5:8-9

And to the Corinthians he says it even more clearly:

We are therefore Christ’s ambassadors, as though God were making his appeal through us. We implore you on Christ’s behalf: Be reconciled to God. 21 God made him who had no sin to be sin for us, so that in him we might become the righteousness of God. 2 Corinthians 5:20-21.

At the Cross we simultaneously behold the great mystery of Christ—the wrath of God against sin and the love of God for sinners and we are saved.

From the parting of the sea to a hill far away our God reigns and his love endures forever.

© Seedbed 2021
People Who Say Such Things: Understand the Wrath of God
MORE STORIES