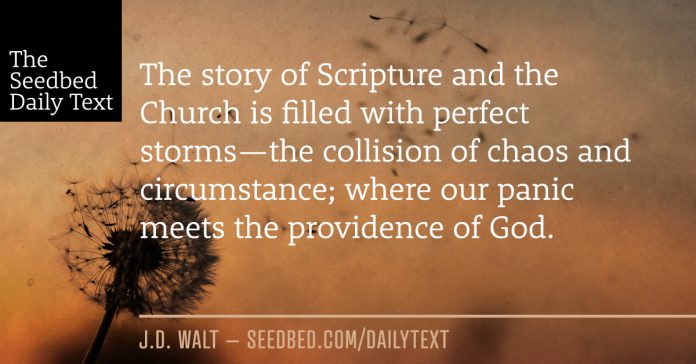 When a gentle south wind began to blow, they saw their opportunity; so they weighed anchor and sailed along the shore of Crete. Before very long, a wind of hurricane force, called the Northeaster, swept down from the island. The ship was caught by the storm and could not head into the wind; so we gave way to it and were driven along. As we passed to the lee of a small island called Cauda, we were hardly able to make the lifeboat secure, so the men hoisted it aboard. Then they passed ropes under the ship itself to hold it together. Because they were afraid they would run aground on the sandbars of Syrtis, they lowered the sea anchor and let the ship be driven along. We took such a violent battering from the storm that the next day they began to throw the cargo overboard. On the third day, they threw the ship’s tackle overboard with their own hands. When neither sun nor stars appeared for many days and the storm continued raging, we finally gave up all hope of being saved.

The story of Scripture and the Church is filled with perfect storms. By this I mean the collision of chaos and circumstance; where our panic meets the providence of God.

Think about it. It was a storm, a perfectly timed storm, that led to Jonah being thrown overboard on the ship bound for Tarsus. Remember, the whale dispatched him to Nineveh.

I hope you read the desperation in the tone of today’s text. Note especially the closing words, “. . . we finally gave up all hope of being saved.”

That’s exactly what a perfect storm does. It brings us to a place where we have nothing left. You’ve perhaps heard the saying, “You will never know God is all you need until you know he is all you have.” It’s a place we almost never choose to go. We must be taken there. Whether the storm be caused by Satan or the Spirit matters not. All that matters is coming to the humble place of pure dependence on God.

Yes, often it’s only the perfect storm of cancer or addiction or betrayal or a prodigal child or a divorce or a thousand other un-chosen circumstances that bring us face to face with our utter inability to change the situation and God’s inestimable power to save—come what may.

Were it not for another of these perfect storms, we would likely have never heard from the Apostle whose movement saved England and most shaped America, John Wesley. It was aboard the Simmonds, a ship bound from England to America, when he penned these words in his journal:

At noon our third storm began.  At four it was more violent than before.  At seven I went to the Germans.  I had long before observed the great seriousness of their behavior.  Of their humility they had given a continual proof by performing those servile offices for the other passengers, which none of the English would undertake; for which they desired and would receive no pay, saying, ‘it was good for their proud hearts,’ and ‘their loving Saviour had done more for them.’  And every day had given them an occasion of showing a meekness which no injury could move.  If they were pushed, struck, or thrown down, they rose again and went away; but no complaint was found in their mouth.  There was now an opportunity of trying whether they were delivered from the spirit of fear, as well as from that of pride, anger and revenge.

In the midst of the psalm wherewith their service began, the sea broke over, split the mainsail in pieces, covered the ship, and poured in between the decks, as if the great deep had already swallowed us up.  A terrible screaming began among the English.  The Germans calmly sang on.  I asked one of them afterward, ‘Were you not afraid?’  He answered, ‘I thank God, no.’  I asked, ‘But were not your women and children afraid?’  He replied, mildly, ‘No; our women and children are not afraid to die.’

Wesley, at the time an “Almost Christian,” couldn’t get this scene out of his mind: “A terrible screaming began among the English. The Germans calmly sang on.” After an abysmal failure as a missionary to America he returned to England, where his first move was to visit Herrnhut, the village from which those Moravian Germans had come. The rest, as they say, is history, and a story for another time.

Chances are, if you haven’t experienced your perfect storm yet, it will come. Perhaps you face it now. Don’t be afraid. Only believe.

And stay tuned. Tomorrow’s entry will prove the point.

Have you faced your perfect storm yet? Are you facing it now? How did God meet you? How might you encourage someone else facing their perfect storm?