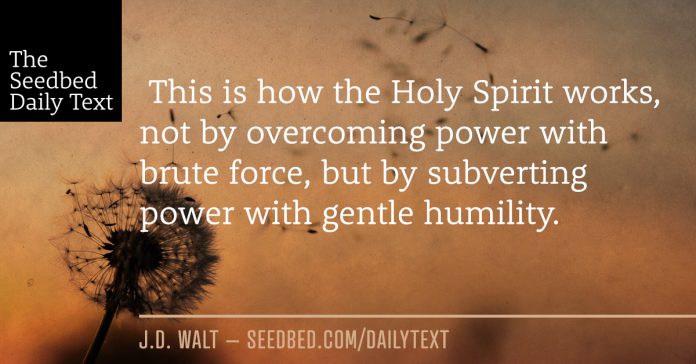 Then Felix, who was well acquainted with the Way, adjourned the proceedings. “When Lysias the commander comes,” he said, “I will decide your case.” He ordered the centurion to keep Paul under guard but to give him some freedom and permit his friends to take care of his needs.Several days later Felix came with his wife Drusilla, who was Jewish. He sent for Paul and listened to him as he spoke about faith in Christ Jesus. As Paul talked about righteousness, self-control and the judgment to come, Felix was afraid and said, “That’s enough for now! You may leave. When I find it convenient, I will send for you.” At the same time he was hoping that Paul would offer him a bribe, so he sent for him frequently and talked with him.When two years had passed, Felix was succeeded by Porcius Festus, but because Felix wanted to grant a favor to the Jews, he left Paul in prison.

So here we have the consensus MVP of the first century Church, the All-Star Apostle to the Gentiles, an all but certain Hall of Famer, and he sat in jail for two years. Anchored in the Word of God and filled with the Holy Spirit, he sat in a dank prison cell bound in chains. It would be akin to benching Lebron James (or pick your own superstar athlete) for the next two years. No playing time.

Now consider his captor. By all standards of the day, Felix was an important person. He held high office and considerable power. Sure, he was likely despised like any other corrupt Roman middle management politician (a.k.a. “Governor”).

They bowed to Felix as though he had godlike power. They beat Paul as though he were a common criminal. Felix held the command of an entire province. Paul held only the chains that held him.

Felix knew all about Jesus and the fledgling church spreading like wildfire across the land. He could not dismiss it, though it seemed as nothing compared to the imperial power structure of Rome. He could not dismiss Paul and kept sending for him to hear him talk about Jesus and the Way. And then he had the audacity to make him sit in that prison for two years as a “favor” to the Jews. What a scuz!

Paul was not afraid of Felix. Interestingly, though, Felix was afraid of Paul. The powerless one held all the power. (i.e. see the cross) This is how the Holy Spirit works, not by overcoming power with brute force, but by subverting power with gentle humility. It’s astonishing really.

In the first century and every century since, it can seem like all the energy, action, importance, and power resides with the politicians of the day. It takes faith to realize the falsity of it all. I once placed my hope in that process and system. Now, it’s a complete and utter absurdity to me. Today, millions of people will invest millions of dollars into campaigns who will flush the money down the toilet of eighth grade gossip wars carried out via tit for tat combative television commercials.

In the midst of it all, scattered across the countryside, are the little people of the Way, who, to the naked eye, sit on the sidelines, relegated to an apparent dead end prison cell of one sort or another—sometimes for two years or more. In the eyes of the Holy Spirit, they will be the subjects of history’s storytellers. These other guys, in all likelihood, will go the way of their commercials.

Take heart. It will all come to a great reversal eventually. It always does. Make sure you are on the right side of that reversal today.

Look at the score board two thousand years later. Who won? Paul or Felix? Jesus or Pilate?

And to be sure, there are many public servants, men and women alike, who are doing their dead level best to do their work in a God honoring way. Let’s encourage them. May their tribe increase.

How is it we are so enamored with worldly power and power players, even in the church? Ask Jesus to show you who the real history makers are in your midst. You might be surprised.