Pontius Pilate and the Politician in Us All - Seedbed
close
Menu 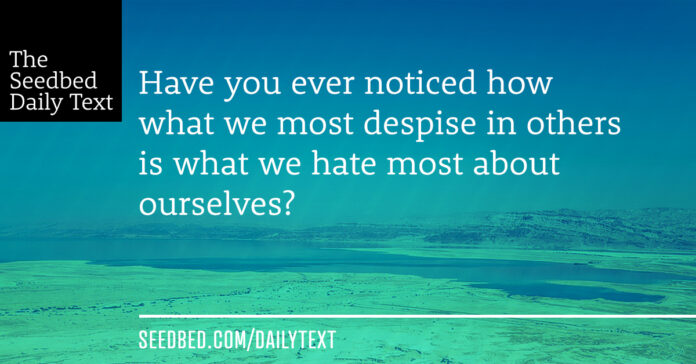 1 Then Pilate took Jesus and had him flogged. 2 The soldiers twisted together a crown of thorns and put it on his head. They clothed him in a purple robe 3 and went up to him again and again, saying, “Hail, king of the Jews!” And they slapped him in the face.

4 Once more Pilate came out and said to the Jews gathered there, “Look, I am bringing him out to you to let you know that I find no basis for a charge against him.” 5 When Jesus came out wearing the crown of thorns and the purple robe,Pilate said to them, “Here is the man!”

6 As soon as the chief priests and their officials saw him, they shouted, “Crucify! Crucify!”

But Pilate answered, “You take him and crucify him. As for me, I find no basis for a charge against him.”

7 The Jewish leaders insisted, “We have a law, and according to that law he must die, because he claimed to be the Son of God.”

8 When Pilate heard this, he was even more afraid, 9 and he went back inside the palace. “Where do you come from?” he asked Jesus, but Jesus gave him no answer. 10 “Do you refuse to speak to me?” Pilate said. “Don’t you realize I have power either to free you or to crucify you?”

11 Jesus answered, “You would have no power over me if it were not given to you from above. Therefore the one who handed me over to you is guilty of a greater sin.”

Why do we love to hate Pontius Pilate? He didn’t start anything. He had no dog in the fight. It actually seems like he wants to help Jesus. Peter, Jesus’ number one disciple, denies him three times. Pontius Pilate, who doesn’t know Jesus from Adam and who stands to gain nothing from releasing him, tries to save him three times. Everything is perfectly backwards.

Pilate is a case study on why people disdain politicians. He is a man who is long on conviction and short on courage. He wants to stand on principle yet he wants to please people. His ultimate interest, however, is in protecting himself by preserving his power.

Have you ever noticed how what we most despise in others is what we hate most about ourselves?

Abba Father, thank you for your son, Jesus, whose character is the union of conviction and courage. Make it so with us. We pray in Jesus’ name. Amen.

1. What do you think of Pontius Pilate?

2. Does your courage measure up to your convictions?