Prayer in the Midst of Anguish: Psalm 137 - Seedbed
close
Menu 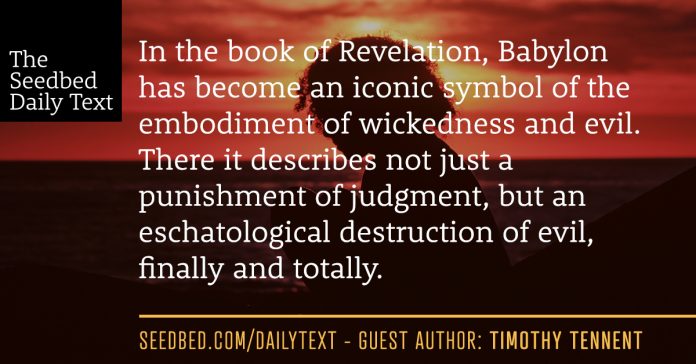 1 By the rivers of Babylon we sat and wept
when we remembered Zion.
2 There on the poplars
we hung our harps,
3 for there our captors asked us for songs,
our tormentors demanded songs of joy;
they said, “Sing us one of the songs of Zion!”

4 How can we sing the songs of the Lord
while in a foreign land?
5 If I forget you, Jerusalem,
may my right hand forget its skill.
6 May my tongue cling to the roof of my mouth
if I do not remember you,  if I do not consider Jerusalem
my highest joy.

7 Remember, Lord, what the Edomites did
on the day Jerusalem fell. “Tear it down,” they cried,
“tear it down to its foundations!”
8 Daughter Babylon, doomed to destruction,
happy is the one who repays you
according to what you have done to us.
9 Happy is the one who seizes your infants
and dashes them against the rocks.

Psalm 137 is without doubt one of the most troubling and difficult psalms in the Psalter, and the final verse is often thrown up as the definitive reason that certain psalms cannot be sung by Christians. The problem with this assessment is that, while this psalm may potentially contain the most vivid image of imprecation in any of the psalms, we could not possibly cut out all of the psalms that contain similar curses. They are found throughout a surprising number of the psalms, and quite a few are just as shocking as this one (e.g., Psalms 58, 69, 109, etc.). But as we have already said, there is a reason these psalms (and these specific verses) are contained in the canon of Scripture.

But let us not jump immediately to the final verse, without first entering into the anguish of the previous verses. The psalmist had experienced extraordinary pain, ridicule, mocking, violence, and scorn. He had been violently forced from his home, had potentially seen loved ones raped or murdered before his eyes, had seen his home and village pillaged and destroyed, and had been marched along a long, painful journey to a foreign land with nothing but the clothes on his back. Once there, he lived the life of forced labor, and endured the mocking of his captors, who taunted him with feigned requests that he sing the songs of his homeland and the greatness of his defeated God. He remembered that somewhere in the writings of his own people, there was a prophecy about a just God acting to set these horrific injustices right. Somewhere, God had promised that he would not let such violence go unpunished, and that he would pay back to them as they had done. After all, if God let such horrors go, what kind of God would he be? Certainly not a God concerned with either justice or love, and the psalmist is confident that the God of Israel is absolutely concerned with both. Thus, he does exactly what he has been taught to do in the face of such evil and wickedness and injustice—he prays! He does not take vengeance into his own hands, or strike back with comparable violence for violence. No—he laments and he prays. He prays for God to take that action, and he trusts that God indeed will do just that. This is his only hope for not going mad in all that he has to endure.

Now we come to the final verse, commending the one “who seizes your infants and dashes them against the rocks” (v. 9). As the psalmist reflects upon God’s promise to bring justice upon Babylon for all of their cruelty, he pulls out of his memory one of those specific descriptions (from Isaiah 13:16) and in desperation, quotes it back to God as part of his prayer. In voicing this, he is releasing the deepest cry of his own desire to strike back in anger, and he is putting that retribution into the hands of God. The Lord had prophesied such judgment against Babylon, and the psalmist takes comfort in God’s Word. His anguish is released through prayer. (Though we should read this psalm alongside of Psalm 87, where God’s final plan—even for Babylon—is greater than could have been imagined at the time of Jewish exile.)

The fury of retribution found in Psalm 137 resumes once again in Revelation, where Babylon has become more than just a historical world power of the sixth century BC. In the book of Revelation, Babylon has become an iconic symbol of the embodiment of wickedness and evil. Chapter 18 describes not just a punishment of judgment, but an eschatological destruction of evil, finally and totally. Here, the imagery of Psalm 137 comes full circle. For in this symbolic mode, the children of Babylon represent the ability of wickedness to propagate and continue—and so the destruction of children represents the finality of evil’s destruction, never to rise again. In this image, we actually have the great hope of the Christian—that someday, evil itself will be destroyed, never to rear its head again. Therefore, in that great hope of Revelation 18:21–24, we sing the opening praise of Revelation 19:1–2—“Hallelujah!”