How to Preach the Gospel in Four Tweets - Seedbed
close
Menu 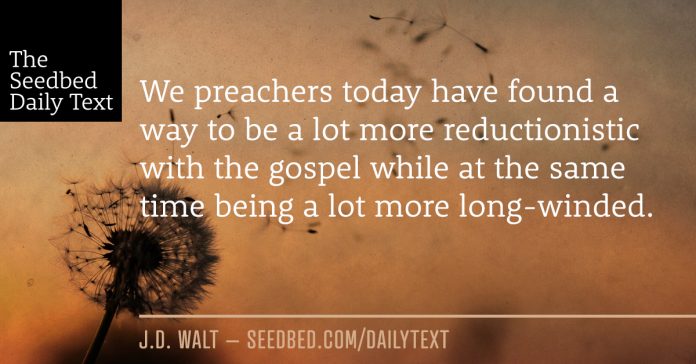 Then Peter began to speak: “I now realize how true it is that God does not show favoritism but accepts from every nation the one who fears him and does what is right. You know the message God sent to the people of Israel, announcing the good news of peace through Jesus Christ, who is Lord of all. You know what has happened throughout the province of Judea, beginning in Galilee after the baptism that John preached— how God anointed Jesus of Nazareth with the Holy Spirit and power, and how he went around doing good and healing all who were under the power of the devil, because God was with him.“We are witnesses of everything he did in the country of the Jews and in Jerusalem. They killed him by hanging him on a cross, but God raised him from the dead on the third day and caused him to be seen. He was not seen by all the people, but by witnesses whom God had already chosen—by us who ate and drank with him after he rose from the dead. He commanded us to preach to the people and to testify that he is the one whom God appointed as judge of the living and the dead. All the prophets testify about him that everyone who believes in him receives forgiveness of sins through his name.”

Someone really should make a truly epic, multi-season television series on the Book of Acts. I think I would call it, “CHURCH.” We’ve got twenty centuries of highly storied, densely dramatic material. Can you hear it now, “Previously on CHURCH . . .”?

I would make today’s text the season premiere of Season Two. Season One ended with Peter standing before Cornelius, the Roman Centurion, and his friends and family. Just as Peter was about to speak . . . to be continued.

Peter, the Apostle who first preached the gospel on the Day of Pentecost, now preaches the gospel for the first time to a gentile audience.  Permit me a few brief observations about the Script:

1. Peter, Apostle #1A,  begins humbly by identifying himself as one who is still learning: “I now realize . . .”

2. He preaches the gospel as True Story. To be sure, there are massive doctrinal assumptions underpinning his proclamation, but he is not reducing the gospel to a set of truth claims.

3. 225 Words. (in the English equivalent of the original language). Need I say more on this point?

4. In an age where people decry the reductionistic Twitter-ization of everything, let us realize that Peter’s first proclamation of the gospel to a group of relative outsiders was 1,162 characters. He got it done in just over 4 Tweets.

5. No high pressure sales tactics. No playing on emotions. No self-referential stories or cheesy illustrations about draw bridges, birds in barns, or Niagara Falls wire walkers. We preachers today have found a way to be a lot more reductionistic with the gospel while at the same time being a lot more long-winded.

What happened next? That would come in the “preview scenes for the next episode.” All I can say is, buckle up.

If you had to bring a proclamation of the gospel of Jesus Christ down to a few Tweets, how would you express it?