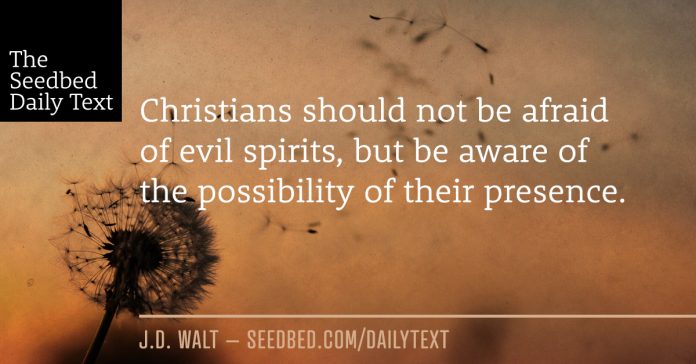 Once when we were going to the place of prayer, we were met by a female slave who had a spirit by which she predicted the future. She earned a great deal of money for her owners by fortune-telling.She followed Paul and the rest of us, shouting, “These men are servants of the Most High God, who are telling you the way to be saved.” She kept this up for many days. Finally Paul became so annoyed that he turned around and said to the spirit, “In the name of Jesus Christ I command you to come out of her!” At that moment the spirit left her.

I remember as a child the stack of board games in our playroom. Tucked right there between Monopoly and Candy Land was a different kind of board game. It didn’t seem to belong in the world of Chutes and Ladders. It had a name we couldn’t even pronounce. You know the one I’m talking about. The dreaded Ouiji board. Some people considered it the spawn of Satan while others thought it good, clean family fun.

In today’s text, we are dealing with a woman we might refer to today as a psychic. You’ve seen those little houses lining the freeway access roads in most cities. Palm Readings, Fortune Telling, Tarot Cards, Tea leaves, and so forth. I don’t know about you, but I mostly think of them as scam artists.

There’s probably a lot more smoke than fire to all this business, but as they say, “Where there’s smoke there’s fire.”

What do you think? Is it all a big hoax or is there some underlying reality of spiritual forces?

I believe the latter to be the case. Could Paul be making reference to this reality when he says things like . . .

Satan is real. Demons are real. Evil spirits are real. They aren’t everywhere lurking behind every ailment and problem in the world, but they are real. It takes discernment to understand when and where they are at work. The bigger reality we must keep always before us? Jesus is Lord. He is the armor of God who is all at once vulnerable and invincible (It’s how Paul can command the forces of evil in one minute and get the stuffing beat out of him by people in the next).

Where are you in your understanding of spiritual warfare, Satan, demons, evil spirits and so forth? Do you tend to overplay these things or underplay them?