The Problem of Worldly Christians and the Remedy - Seedbed
close
Menu 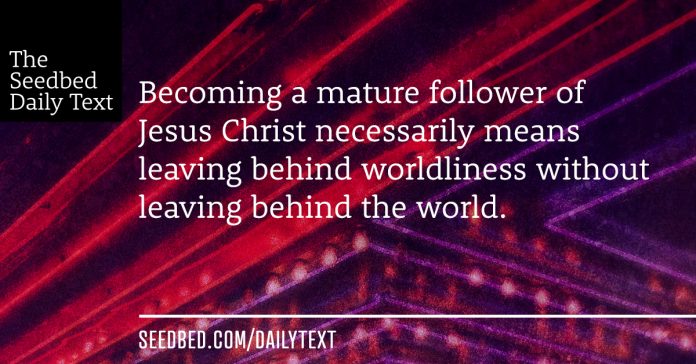 Brothers and sisters, I could not address you as people who live by the Spirit but as people who are still worldly—mere infants in Christ. 2 I gave you milk, not solid food, for you were not yet ready for it. Indeed, you are still not ready. 3 You are still worldly. For since there is jealousy and quarreling among you, are you not worldly? Are you not acting like mere humans? 4 For when one says, “I follow Paul,” and another, “I follow Apollos,”are you not mere human beings?

To those sanctified in Christ Jesus and called to be his holy people (i.e. “us”):

Perhaps one of the great oxymorons in the bible would be the combination of the two words “worldly Christian” yet this is precisely Paul’s assessment of the Corinthian Christians. There are new Christians, and then there are immature christians and they aren’t the same thing. An immature Christian is one who has become stunted in their growth or arrested in development. The goal of discipleship—which is the work of the Holy Spirit to restore a human person to the image of God and the mind of Christ—is to bring forth mature adult Christians. Nothing stunts the growth or arrests the development of a person’s or a community’s faith like worldliness does.

So what is the opposite of worldliness? We might describe it as godliness or holiness or Christ-likeness or glorious or even beautiful. All of these are ways of describing of what it means to be spiritual. To be spiritual, in the biblical sense, means to be inspired and animated at the core of one’s being by the indwelling Holy Spirit. To be spiritual means to belong to God in such a way that ones very character and essence increasingly resembles the character and nature of God.

Becoming a mature follower of Jesus Christ necessarily means leaving behind worldliness without leaving behind the world. This is the point where so much of the Christianity of our time gets off the rails.

You are still worldly. For since there is jealousy and quarreling among you, are you not worldly? Are you not acting like mere humans?

Worldliness smacks of pride. The crazy thing about worldly Christians is they usually have no idea of it.

All of this brings to mind Jesus parable of the sower. My sense is Paul is drawing from this teaching as he works with the Corinthian church.

“Still others, like seed sown among thorns, hear the word; but the worries of this life, the deceitfulness of wealth and the desires for other things come in and choke the word, making it unfruitful.” (Mark 4:18-19)

We will pick up here tomorrow.

Our Father in heaven, thank you for the hard word from your Word about growing up into a mature follower of your son, Jesus. Please show me where I am yet immature. Expose my wordliness. I do not want to conform to the patterns of this world yet some of those run so deep in me I have no idea of it. Search me Holy Spirit. Ferret out those offensive ways and lead me in the way of Jesus. In his name I pray, amen.

1. Let’s do a scaling exercise. On a scale of 1-10 with 1 representing worldly and 10 representing spiritual, where would you place yourself?

2. Can you think of a person you consider to be an authentically spiritual person in the way Paul talks about?

3. Where do you most struggle with worldliness? What would it look like to become less worldly and more spiritual?

CALLING ALL PASTORS/PREACHERS. I’m trying to learn who the pastors/preachers are in our Daily Text Community. If that’s you, would you take 2 minutes and respond here. No spam—I promise. ;0)