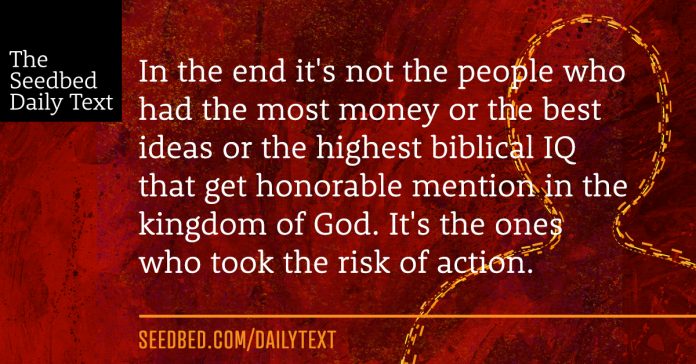 20 You foolish person, do you want evidence that faith without deeds is useless? 21 Was not our father Abraham considered righteous for what he did when he offered his son Isaac on the altar? 22 You see that his faith and his actions were working together, and his faith was made complete by what he did. 23 And the scripture was fulfilled that says, “Abraham believed God, and it was credited to him as righteousness,” and he was called God’s friend. 24 You see that a person is considered righteous by what they do and not by faith alone.

25 In the same way, was not even Rahab the prostitute considered righteous for what she did when she gave lodging to the spies and sent them off in a different direction? 26 As the body without the spirit is dead, so faith without deeds is dead.

How in the world do we know anything about Abraham? Was it because of what he believed about God? Sort of, but how do we know what he believed about God? Yes, we know it because of what he did. Abraham obeyed God. The only reason we have any idea of who Abraham was is because of what Abraham did. I have often wondered how many people God tried to put in the game before Abraham. Many of them probably believed the right things. They probably had better resumes. But when it came down to putting their money where their mouth is, they balked. I can almost hear the echo from Heaven, “Next!”

This is why, in the end, it always appears that God chooses the unlikely to accomplish the impossible. Faith means street level obedience. “Who will go for me, and whom shall I send?” The Bible gives the impression that God doesn’t care too much about one’s past or track record or resume or qualifications. God looks for someone, anyone, whose yes is more than a word. The so-called righteousness that comes from faithfulness to the religious motions seems to have little to do with the righteousness that comes from simple obedient action. Look who James calls as his next witness:

In the same way, was not even Rahab the prostitute considered righteous for what she did when she gave lodging to the spies and sent them off in a different direction?

Think about that for a minute . . . a righteous prostitute. Wouldn’t the conventional church consider that to be an oxymoron on steroids? What this tells me is that anyone can get in the game at any time regardless of past performance, lack of biblical knowledge, church attendance records, moral perfection or imperfection, skills, good teeth, and so forth. All it takes is a willingness to pony up a little obedience, get out on the field and start playing.

In the end it’s not the people who had the most money or the best ideas or the highest biblical IQ that get honorable mention in the kingdom of God. It’s the ones who took the risk of action. That’s what faith is all about.

So how about it? Are you ready to sing the song? “Put me in Coach! I’m ready to play! Today!”

1. In what ways have you considered yourself inadequate or not qualified to really play a position on the field of faith?

2. Is there some failure in your past or brokenness that you feel disqualifies you from getting into the game? What will it take to get past this? What would Rahab say to you about that?

3. What are your excuses for not stepping up to the plate and swinging for the fence of faith? Will these be satisfying reasons for staying on the sideline in the end?