The Reason Behind Most Discipleship Failures - Seedbed
close
Menu 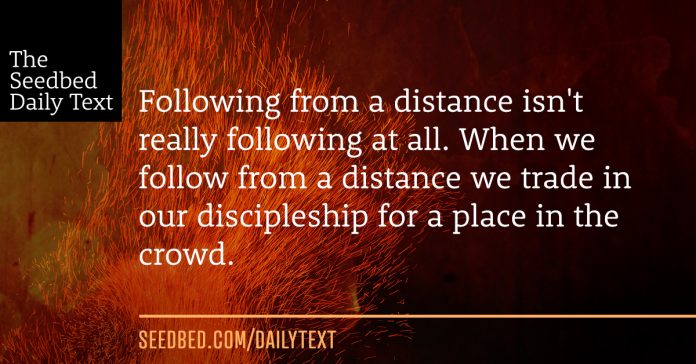 53 They took Jesus to the high priest, and all the chief priests, the elders and the teachers of the law came together. 54 Peter followed him at a distance, right into the courtyard of the high priest. There he sat with the guards and warmed himself at the fire.

55 The chief priests and the whole Sanhedrin were looking for evidence against Jesus so that they could put him to death, but they did not find any. 56 Many testified falsely against him, but their statements did not agree.

57 Then some stood up and gave this false testimony against him: 58 “We heard him say, ‘I will destroy this temple made with human hands and in three days will build another, not made with hands.’” 59 Yet even then their testimony did not agree.

I would like to make an observation about today’s text which I think holds the key to most discipleship failures. It’s right there in v.54.

Peter followed him at a distance.

Just a few verses back we saw Peter run for the hills with the rest of the disciples. Apparently, somewhere between fourth and fifth gear, he remembered the loyalty pledge he made to Jesus a few short hours earlier.

I have a friend, Lauren, who categorizes people in two basic groups: the people who have “dealt” and the people who have “not dealt.” What does she mean by this? I’m glad you asked. She’s talking about people are stuck somewhere between forgiveness and freedom. Many if not most people stop growing when they receive the first gift of salvation—the forgiveness of their sins. For many reasons, all of which will be profoundly unsatisfying in the end, they fail to press on from the gift of forgiveness to greater gifts of freedom in Christ and the fullness of the Holy Spirit. The result is they tend to follow Jesus at a distance. As we discussed the other day, they put on a show of commitment which masks their deficit of devotion.

And that’s the crazy thing about it. No one would have ever accused Peter of following at a distance. He looked to the world like disciple 1A.

So who follows Jesus up close? It’s the ones who have dealt. It’s the people who have broken through the barrier of their brokenness only to discover their blessedness. They are the poor in spirit, those who mourn, the meek, the ones who hunger and thirst for righteousness beyond religiosity, who crave mercy, whose hearts radiate the pure love of God, who breathe peace everywhere they go and who receive the persecution of enemies as a badge of honor.

Those who follow Jesus up close have come to the realization that it’s the only way they can make it.

Spirit of the Living God, fall afresh on me. Lord Jesus, I don’t want to think I might be following you at a distance, which may be the telltale sign. Save me from self-deceit and grace me with the truth. Transform my show of commitment into a real heart of devotion. Melt me. Mold me. Fill me. Use me. For the glory of your name, Jesus. Amen.

All of this has me asking myself, “Where am I in the mix?” It probably looks like I’m following pretty closely—which is what scares me. How about you?

© Seedbed 2021
The Reason Behind Most Discipleship Failures
MORE STORIES