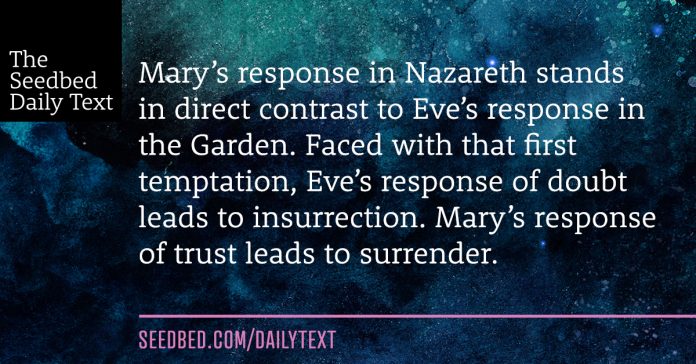 35 The angel answered, “The Holy Spirit will come on you, and the power of the Most High will overshadow you. So the holy one to be born will be called[b] the Son of God. 36 Even Elizabeth your relative is going to have a child in her old age, and she who was said to be unable to conceive is in her sixth month. 37 For no word from God will ever fail.”

38 “I am the Lord’s servant,” Mary answered. “May your word to me be fulfilled.” Then the angel left her.

The name Mary can mean rebellion.

That’s not an idea we normally associate with the Virgin Mary. We think of her as a stained glass saint, one dimensional icon of holiness, prized role in the annual children’s program.

Truth be told, we don’t often think of her at all until it’s time to unpack the nativity set again. Our tradition protested against the abuses of the papal institution and sought to re-form the Church in the image of its radical beginnings. So we tend to shy away from focusing on Mary at all out of fear of past misconceptions. But this is to our own great loss. Through this humble woman from a backwoods village, far out of the sphere of power, the Almighty draws near to us. As the baby kicks in her womb, empires tremble and a rebellion—yes, rebellion— is set in motion.

In today’s passage, Mary is greeted by the impossibly good news that she will conceive the long awaited hope of Israel. Even though she can’t understand how this will happen through a virgin, she defies her doubt and responds with trust.

In Advent, Mary launches the counter-rebellion against sin and death through this radical act of trust. The Way of Jesus is, in fact, just that. It’s a holy rebellion against the way things are. It embodies the culture of a different kind of Kingdom that threatens to upend the conventional order of things and usher in the customs of Heaven on Earth.

Still uncomfortable with the word rebellion? Then consider this as well: In the museum of the Bible located in Washington, D.C. there is a popular exhibit known as the ‘Slave Bible.’ That thought alone should pierce your heart. But it gets worse. This English translation from the 1800s was specifically designed for the conversion of slaves to Christianity and to assist in their education. But in order to protect the status quo power dynamics of the plantation, this version was heavily edited. The goal being to remove any reference that might “incite rebellion” or awaken a longing for liberation. As you might expect, the end result was a Bible hardly recognizable.

According to the associate curator of the exhibit, there are 1,189 chapters in a standard Protestant Bible. This one contains 232.

Because across every page, this is a story that incites rebellion and awakens a longing for liberation. And now, as waiting becomes arrival, the Author of this story is stepping into it to become the Protagonist.

And like Mary, we delight in this impossibly good news. And we echo, “May it be to your servants as you have said.”

Prince of Peace, reconcile the impossible divisions that still exist in my life. Make my life look like your Kingdom.