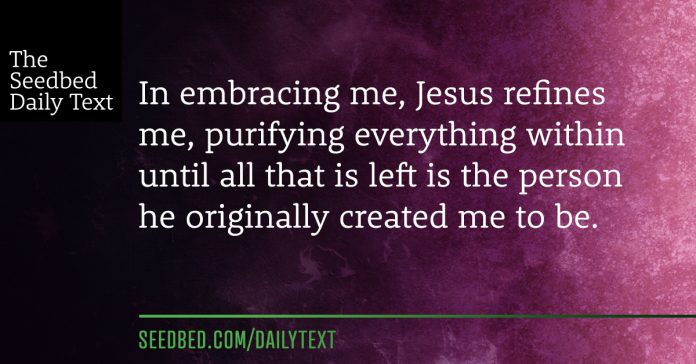 “But who will be able to endure it when he comes? Who will be able to stand and face him when he appears? For he will be like a blazing fire that refines metal, or like a strong soap that bleaches clothes. He will sit like a refiner of silver, burning away the dross. He will purify the Levites, refining them like gold and silver, so that they may once again offer acceptable sacrifices to the Lord. Then once more the Lord will accept the offerings brought to him by the people of Judah and Jerusalem, as he did in the past.

Then I saw a Lamb that looked as if it had been slaughtered, but it was now standing between the throne and the four living beings and among the twenty-four elders. He had seven horns and seven eyes, which represent the sevenfold Spirit of God that is sent out into every part of the earth. He stepped forward and took the scroll from the right hand of the one sitting on the throne. And when he took the scroll, the four living beings and the twenty-four elders fell down before the Lamb. Each one had a harp, and they held gold bowls filled with incense, which are the prayers of God’s people.

It might seem strange that the season when the Church celebrates a baby’s birth is also the time when we think about the final judgment. In Advent, we do have a double vision, because we are actually observing two Advents. Advent is simply a fancy term to describe something “coming.” During this season, we celebrate Jesus’ first coming as the vulnerable Christ-child and we anticipate his future coming as our reigning Judge and King.

It’s easy to celebrate Jesus as the smiling baby of Christmas.

But it’s a little more intimidating to receive him as our Righteous Judge.

I know that when I think of Jesus as Judge, my mind goes to something like the images in Jonathan Edwards’s famous sermon, “Sinners in the Hands of An Angry God.” The gentleness of Jesus’ face hardens in my imagination, and I find myself retreating from him within my spirit. I begin to worry that he will judge me harshly, and I become afraid of his gaze.

But if we only think about judgment as something that God does in anger or hardheartedness, we’ve robbed ourselves of an image of Jesus as Judge that is actually the height of compassion and love. The Lion of Judah is also the slain Lamb of God, and he looks upon us with a gentle, loving gaze even as he brings the fire of his righteous judgment into our lives and into the world.

Fleming Rutledge describes this image of Jesus as compassionate and righteous Judge. She writes,

“The Judge confronts us. But it is not as we feared. The face of the Judge is marked with infinite compassion and infinite suffering. His hands and feet are torn by spikes driven in by violent blows. His brow is pierced by the crown of thorns, and his expression bears the tokens of utmost humiliation.” (p. 247)

I can trust myself to the judgment of the suffering Lamb of God, the one who carries the scars of the world’s evil on his hands and feet.

The King who judges me is the man Jesus, who has already embraced all of me, including all of my sin, on the cross. In embracing me, he refines me, purifying everything within until all that is left is the person he originally created me to be.

My Refiner’s fire is actually a fire of freedom.

It’s a fire of love.

The judgment of Christ is not harsh; it is healing.

I am reminded of a story from C.S. Lewis’s children’s fantasy book, The Voyage of the Dawn Treader. There is a little boy in the story named Eustace who ends up turning into a dragon. Eventually, he wants to become a little boy again, but he can’t turn himself back. One night, a lion appears to him and tells him that the only way his scales will come off is if the lion removes them with his claws.

C.S. Lewis describes the lion’s refining work by having Eustace share his experience this way:

“The very first tear he made was so deep that I thought it had gone right into my heart. And when he began pulling the skin off, it hurt worse than anything I’ve ever felt. The only thing that made me able to bear it was just the pleasure of feeling the stuff peel off. You know — if you’ve ever picked the scab of a sore place. It hurts…oh but it is such fun to see it coming away.”

The holy fire of the slain Son of Man is a blessed fire.

It is a fire that burns, but it will leave us more beautiful than we were before.

May we dare to ask our Lord to set us aflame with his refining fire during this season. It will hurt, but oh, it will be so good to see our own dragon scales burning away.

We can joyously welcome not only Christ the child, but also Christ our Judge during Advent.

He comes not to condemn us, but to set us free.

My loving Judge and King, set me ablaze with your refining fire.

The Difference between a Death Sentence and the Death Penalty