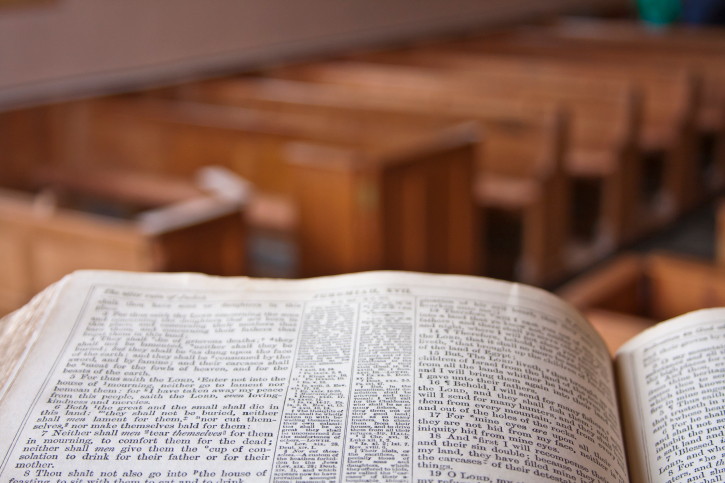 I suppose all of us would agree with P.T. Forsyth’s dictum that “with its preaching Christianity stands or falls” (Positive Preaching and the Modern Mind, p.1), and we would probably also concur that all true Christian preaching must in some sense be biblical. The issue with which the Protestant churches have struggled is not the viability or appropriateness of biblical preaching, but its definition and character.  The question is: What is biblical preaching?  Or, put somewhat differently, what ought to be the relationship between the biblical text and the delivered sermon?

In short, it seems to me that there are two distinctions that can be helpful in our thinking about the nature of biblical preaching.  The first distinction involves degrees of engagement with individual passages; this has to do with the degree to which the specific meaning of individual passages determines the content of the sermon.  There are four levels of engagement or specificity.  Moving from the more general to the more specific these levels would be:

In this level, again the major relationship between the biblical passage and the sermon is thematic, but here the sermon develops the theme suggested by the passage along lines that are informed by a general sense of biblical teaching as a whole.

In this level, once again the major relationship between the biblical passage and the sermon is thematic, but here the sermon develops the theme suggested by the passage along lines that are informed by the specific and concrete ways the Bible as a whole deals with this theme.  Yet in this level there is still no serious attempt to communicate the exact meaning of the passage itself as discerned by careful attention to its form and contexts.

In this most specific level, the precise meaning of the passage, derived from appropriate exegetical processes (which always include personal subjective involvement), becomes the basis for the specific content of the sermon.  When I say that in this level the exegesis of the passage becomes the basis for the content of the sermon, I do not mean that such exegesis is the content of the sermon, but I mean that it determines not only the general topic but also the issues or themes that are discussed under the general topic, and in fact it also determines how each of these main issues or themes is handled.

Although each of these levels is, in some sense, biblical preaching, it seems to me that we should aim at levels C and D, for with levels A and B there is the serious possibility of superficiality and / or distortion of the biblical message.  There are, of course, potential problems with C and D: Content-specific sermons, e.g., can become essentially Bible or theology lectures; and that is not preaching.  What is needed is a joining of careful interpretation and contemporary application of the biblical text with homiletical skill.

There is also a distinction between the form of a sermon and its content.  When I was in college I read The Way to Biblical Preaching, by Donald G. Miller, which revolutionized my understanding of preaching.  Miller argued that all Christian preaching should be biblical, and that all biblical preaching should be expository.  But he went on to re-define expository preaching in terms of content rather than form.  He noted that homileticians have generally defined expository preaching in terms of form:  in contrast to topical or textual sermons, an expository sermon is based on a longer passage and explains the meaning of that passage; it is, in other words, in the form of passage explanation.

But Miller suggested an alternative; we should not understand expository preaching in terms of sermonic form, but in terms of sermonic content, i.e., an expository sermon is one in which the specific meaning of the text(s) understood in its context determines the content of the sermon (i.e., the themes we talk about and the way we talk about them in the sermon).  A sermon may, therefore, be topical or textual in form but expository in content.  Or, to use more current categories, and with a tip of the hat to Ellsworth Kalas, a sermon may be narrative in form but expository in content. There is, of course, still a place for the expository form of sermon, but one should not feel bound to that form.

Soon after reading his book, I heard Miller preach a sermon that illustrated his approach.  His text was John 6:68, where Peter declares, “To whom shall we go?  You have the words of eternal life.”  Miller noted that the passage implies an alternative, to Christ or to someone else, and he sought to answer Peter’s questions by exploring three alternatives to Christ:  self-rule, political or military leaders (and the structures they represent), and great thinkers (and the systems they represent).

Miller never mentioned another passage in the Gospel of John, and he made no explicit interpretive comments, but I knew the Fourth Gospel well enough to recognize that those were three alternatives which John himself raises in the broader context of his Gospel and which he shows to be wanting.  Miller preached a sermon that was topical in form, but expository in content; for he drew his main points or themes from the context and developed each of these main themes in a way that was very much influenced by John’s own treatment of them.

I began with P.T. Forsyth, and I would like to end with him.  In speaking about the practice of beginning the sermon with the reading of a biblical passage Forsyth said: “The custom received ready, nay inevitable, confirmation from the Reformers.   It corresponded to the place they gave the Bible over the Church, on the one hand, and the individual on the other.  It is the outward sign of the objectivity of our religion, its positivity, its quality as something given to our hand.

Even when we need less protection against the Church, we still need it against the individual, and often against the preacher.  We need to be defended from his subjectivity, his excursions, his monotony, his limitations.  We need, moreover, to protect him from the peril of preaching himself, or his age.  We must all preach to our age, but woe to us if it is our age we preach, and only hold up the mirror to the time”  (Positive Preaching and the Modern Mind, p.8).

If I had more time I would like to say something about the role of personal life experience and of systematic theology in biblical preaching, but as every preacher knows, time is limited.