Reformation? Revolution? Or Resurrection? On the Power of Telling an Alternative Story - Seedbed
close
Menu 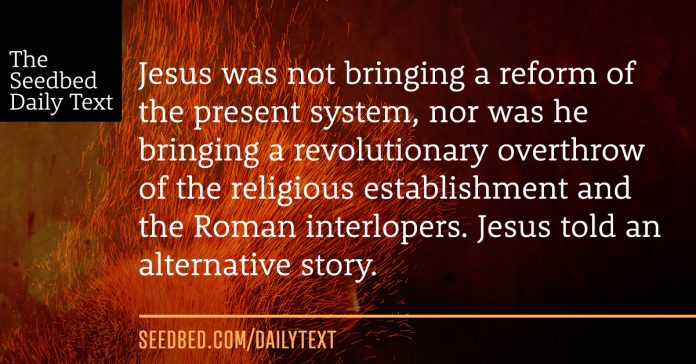 27 They arrived again in Jerusalem, and while Jesus was walking in the temple courts, the chief priests, the teachers of the law and the elders came to him. 28 “By what authority are you doing these things?” they asked. “And who gave you authority to do this?”

29 Jesus replied, “I will ask you one question. Answer me, and I will tell you by what authority I am doing these things. 30 John’s baptism—was it from heaven, or of human origin? Tell me!”

31 They discussed it among themselves and said, “If we say, ‘From heaven,’ he will ask, ‘Then why didn’t you believe him?’ 32 But if we say, ‘Of human origin’ …” (They feared the people, for everyone held that John really was a prophet.)

Jesus said, “Neither will I tell you by what authority I am doing these things.”

“Ivan Illich was a twentieth century Roman Catholic Priest and philosopher from Austria. He was once asked what is the most revolutionary way to change society. Is it violent revolution or is it gradual reform? He gave a careful answer. ‘Neither.’ If you want to change a society, then you must tell an alternative story, he concluded.”

Today’s text strikes this chord in a most dissonant fashion. Today we see the classic confrontation of the ages: the authories who have power over the people vs. the ones whose authority is recognized by the people. It usually sets up as the reformers vs. the revolutionaries.

It’s easy to vilify the Sanhedrin but unfair. Try to see it through their lens. They clearly have an agenda for reform. Their reverence for the “Word of God” was second to none. They wanted to spread Scriptural holiness across the land. They lived for the glory of God to be spread across the Earth and all of their reforms were to this end.

John the Baptist was something of a reformer-revolutionary, yet he knew he was not the one to lead the revolution. He prophesied of the Coming One. The baptism the Messiah would bring would be of a different order than John’s water baptism. It would bear the character of fire. As a consequence, Jesus could not help but be understood by the people as the leader of a revolution who would restore the Kingdom to Israel. John’s dismayed message to Jesus from prison, “Are you the one? Or should we expect another?” signifies this situation. Right up to the very end the people expected to see Jesus take back the nation from Rome and institute the Kingdom of God on Earth. This evoked great fear in the hearts of the “reformers,” i.e. the Sanhedrin. Not only would this “Independent” movement erode their power base, it would likely lead to the end of the nation.

Here’s what no one saw coming, despite Jesu’s explicit and clear indications. Jesus was not bringing a reform of the present system, nor was he bringing a revolutionary overthrow of the religious establishment and the Roman interlopers. Jesus told an alternative story. Jesus, through his words, deeds, life and coming death was telling the story not of reform or revolution but resurrection.

I acknowledge this post is a bit of a ponderous “thinker” post, but it bears immense practical significance for the ways we live out our lives in the midst of the crumbling institutions all around us; from marriage to schools to the workplace to the government and the economy. Reform is good but will never get the job done. Revolution is tempting but never ultimately works, for it merely replaces one power stronghold with another equally corrupt one.

In the face of these options we are called to be persons and collectively a people of the cross—which is to say persons and a people who live out the powerful way of death and resurrection in the every day world—people who have died to the agenda of sin and death and who are gloriously alive to the agenda of resurrection and life. To the present generations of the people of God I say, “This is our shift, our time, and our passing opportunity to tell the alternative story of the cross in the most compelling and beautiful and demonstrably powerful way possible.” Amen? Amen!

Spirit of the Living God, fall afresh on me. Lord Jesus, thank you for telling us the great alternative story with your very life, death and resurrection. Interpret this to us for our time and through our every day lives. We are so prone to fall into the ditches of reformers and revolutionaries. Show us the way of the Cross, the way of death and resurrection. Melt me. Mold me. Fill me. Use me. For the glory of your name, Jesus. Amen.

Isn’t this what discipleship in the way of Jesus is all about? Death to the kingdom of sin and death and self and resurrection into the powerful Kingdom of the Holy Love of God. If not this, then what is it about?