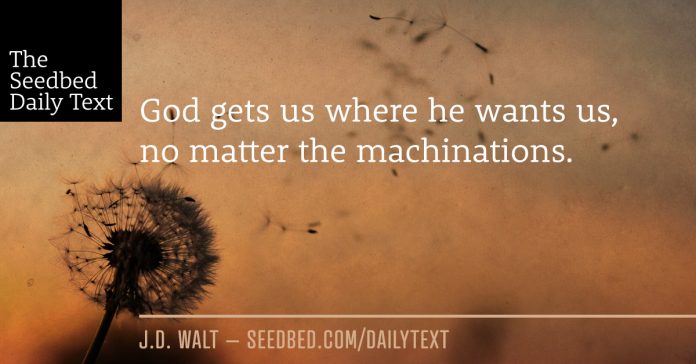 The next day Agrippa and Bernice came with great pomp and entered the audience room with the high-ranking military officers and the prominent men of the city. At the command of Festus, Paul was brought in. Festus said: “King Agrippa, and all who are present with us, you see this man! The whole Jewish community has petitioned me about him in Jerusalem and here in Caesarea, shouting that he ought not to live any longer. I found he had done nothing deserving of death, but because he made his appeal to the Emperor I decided to send him to Rome. But I have nothing definite to write to His Majesty about him. Therefore I have brought him before all of you, and especially before you, King Agrippa, so that as a result of this investigation I may have something to write. For I think it is unreasonable to send a prisoner on to Rome without specifying the charges against him.”

As noted in a recent post, the Apostle Paul was a big fish in the small pond of the Church in her early days; however, he was quite the minnow in the big ocean of the rest of the world.

So how does Roman citizen #353883, living in a backwash corner of the empire, find himself imprisoned for over two years and now on trial for no reason anyone can discern other than he claimed a dead man was alive? How does this obscure human being find himself standing before a governor and a king?

Short answer: Because Jesus said so. Remember back in Matthew 10 when Jesus sent out his twelve apostles on a missionary journey? Remember what he told them? Let me jog your memory.

“On my account you will be brought before governors and kings as witnesses to them and to the Gentiles.” (Matthew 10:18)

It’s been about a hundred posts ago, but I recounted the story of a conversation with a Trappist monk at the Abbey of Gethsemane in Kentucky where he said, “God gets us where he wants us, no matter the machinations.”

Come on! When has it ever happened that a person gets sent to the highest court in the land and those in charge have no earthly idea of why they are sending him there? It gets better. Here’s a prisoner whose basically been forgotten in jail, and the governor, probably after running out of things to talk to King Agrippa about, brings him up in conversation. And he wants the king, who knows neither Paul nor the case, to help determine the charges to send on to Caesar. This is astonishingly ridiculuous.

Remember that I noted the other day, as readers, we must put ourselves into the situation and read forward rather than reading all that we know today back into that moment. When I’ve read this in the past, my easy assumption was to say, “Of course Paul is standing before kings and governors. He’s only one of the most important people in the history of the world.” Wrong. At the time, a person like Paul, a prisoner of no consequence, doesn’t get an audience with a King. It just doesn’t happen. (Well, there was Joseph)

Remember, Paul is not on trial in today’s text. King Agrippa requested to hear him. Paul is being given an “audience” with the king, with all the pomp and circumstance, bells and whistles, fine regalia, military generals, and prominent men of the city.

Paul, the imprisoned criminal, is not on trial as a criminal. No, he stands before King Agrippa as a witness of none other than Jesus  himself,  the King of all Kings.

I want you to revel in the glorious gravity of this moment.

God gets us where he wants us, no matter the machinations.

Do you find this to be a true marvel? Consider this scene in light of the declaration of Jesus identity as the King of Kings.