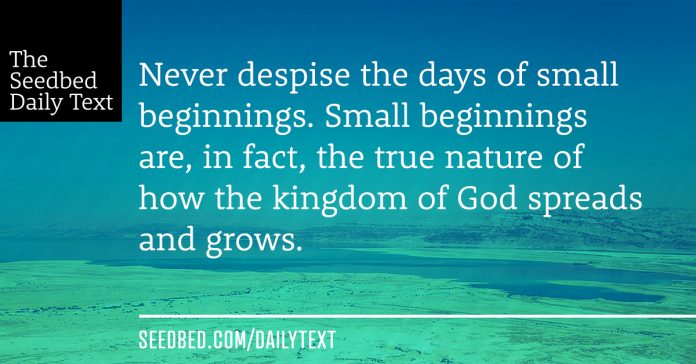 Andrew, Simon Peter’s brother, was one of the two who heard what John had said and who had followed Jesus. The first thing Andrew did was to find his brother Simon and tell him, “We have found the Messiah” (that is, the Christ). And he brought him to Jesus.

Jesus looked at him and said, “You are Simon son of John. You will be called Cephas” (which, when translated, is Peter).

The next day Jesus decided to leave for Galilee. Finding Philip, he said to him, “Follow me.”

Philip, like Andrew and Peter, was from the town of Bethsaida. Philip found Nathanael and told him, “We have found the one Moses wrote about in the Law, and about whom the prophets also wrote—Jesus of Nazareth, the son of Joseph.”

“Nazareth! Can anything good come from there?” Nathanael asked.

We tend to think of well-established, successful movements and organizations as beginning in that same fashion. That is rarely the case. Because of the explosive growth of the Christian movement in the first century and to the present day, we naturally read the stories of its origins in the light of its later success. We celebrate those early disciples and outright champion the Twelve. It is so easy to retrospectively romanticize the early days of a smashing success.

Did you catch this phrase from today’s text?

Andrew, Simon Peter’s brother, was one of the two who heard what John had said and who had followed Jesus.

Andrew was “one of the two” who heard and responded to John.

Wait! One of the two? The great John the Baptist, the phenom forerunner of the Son of God, the one who first identified him to the world, only managed to come up with two followers for Jesus?

Think about it. By any standards, we would file an outcome of two responses on day one (or day two) in the Epic Fail folder. We might console ourselves to remember that one of those two brought his brother and the other one produced a sarcastic, cynical colleague (a.k.a. Nathanial).

Why are we so seduced by the shallow metrics of numbers when it comes to our churches and kingdom efforts? Three joiners and a tepid fourth doesn’t seem like anything we would even have the guts to report. Even twelve would be considered an embarrassment we would desperately want to somehow explain away.

As ego-inflating (or deflating) as the case may be, when it comes to the kingdom of God, numbers are at best an unreliable source and at worst a deceptive measure of success.

Of all those droves of people listening to John, only two raised their hands. It just so happens that one of them turned out to be the apostle to Europe and the other the apostle to Africa—both of which were founding fathers of what is today a 2000-year-and-counting global movement of more than two billion people.

This is how God starts a movement. This is how Jesus saves the world. It should cause all of us to pause and reconsider what success might look like in the eyes of God—to remember the mustard seed and the loaves and fishes and a band of twelve that started with two. And, yes, to never, ever despise the days of small beginnings.

Abba Father, thank you for teaching us the secret of the seed. Cultivate in us the audacity of faith to trust the small starts and humble origins. Come, Holy Spirit, and retrain our vision, remake our mind, and retool our expectations that we might be freed from the ways of the world and fit with the wisdom of the kingdom. We pray in Jesus’ name, amen.

1. Have you ever thought of Jesus’ beginnings as being weak and unimpressive?

2. What is it about numbers that so seduces us?

3. What will it take to shift our mind-set on what constitutes true success? How do we live in the midst of a world (even the church) that remains in the old and broken way of seeing and thinking?