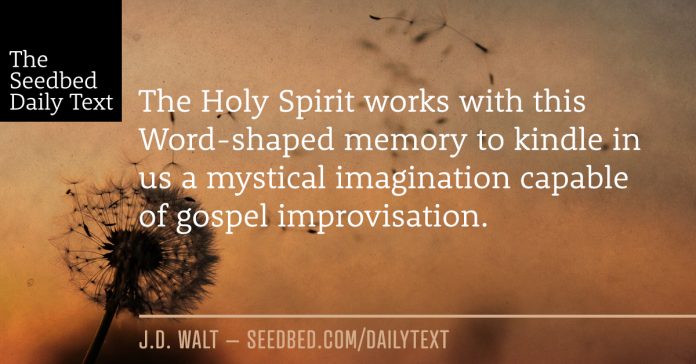 Then they secretly persuaded some men to say, “We have heard Stephen speak blasphemous words against Moses and against God.”So they stirred up the people and the elders and the teachers of the law. They seized Stephen and brought him before the Sanhedrin. They produced false witnesses, who testified, “This fellow never stops speaking against this holy place and against the law. For we have heard him say that this Jesus of Nazareth will destroy this place and change the customs Moses handed down to us.”All who were sitting in the Sanhedrin looked intently at Stephen, and they saw that his face was like the face of an angel.

Deja vu: The feeling that you have already experienced something that is happening for the first time. Remember this?

The chief priests and the whole Sanhedrin were looking for false evidence against Jesus so that they could put him to death. But they did not find any, though many false witnesses came forward. Finally two came forward and declared, “This fellow said, ‘I am able to destroy the temple of God and rebuild it in three days.’” (Matthew 26:59-61)

This is no glitch in the matrix. Jesus was quite clear: As it was with me, so will it be with you. Check this out.

We often think of following Jesus as his disciple in one of two ways. On the one hand, we take the ethical approach, best delineated in the W.W.J.D. acronym, asking ourselves the “What would Jesus do” question in the midst of ethical dilemmas. We search for a principle to guide our steps. On the other hand, we take the mystical approach, listening in with our spiritual sixth sense for an inner impression of what Jesus is telling us in the moment.

I want to suggest a hybrid approach. When an artist wants to apprentice himself to a Master, he becomes obsessively immersed in every aspect of the Master’s life and craft. He knows her daily routine, her brushstrokes, her color theory, her signature mediums, her hallmark moves, her genius as well as her weaknesses, and her most famous works as well as her unknown ones. The apprenticed artist knows the Master so well he can practically think like she thinks or thought. He begins with imitating her ways until he knows her mind so well he can improvise on her craft, producing a work all at once deeply influenced yet profoundly original. True apprenticeship leads to a type of mystical mastery whose expression ranges from the mundane to the magnificent.

Following Jesus is something like this. One must first learn the script (which in this case is the Scripture) before they can ever hope to legitimately improvise on it. We must become obsessively immersed in every aspect of his life and work until his life literally becomes our memory.  The biblical story serves as our memory or script. The Holy Spirit works with this Word-shaped memory to kindle in us a mystical imagination capable of gospel improvisation. It leads to a mystical mastery whose expression ranges from the mundane to the miraculous.

We tend to err on one side or another of this continuum between concrete memory and mystical imagination. When we err on the W.W.J.D. imitation side we get legalism. When we err on the supernatural impartation side we get license. Neither is the goal to land somewhere in the middle, as though aiming for a 50/50 mixture. The key is 100/100: 100% biblical remembrance + 100% mystical imagination. This is what it means to have the “same mind in you that was in Christ Jesus.” This is life as “gospel art.” This is the way of “kingdom improvisation.”

Stay tuned. Stephen will show us what this looks like.

How do you relate to this notion of biblical remembrance + mystical imagination as the secret of gospel improvisation? Have you and are you immersing yourself in the details of the life of Jesus as you would in apprenticing yourself to a master artist or craftsman?