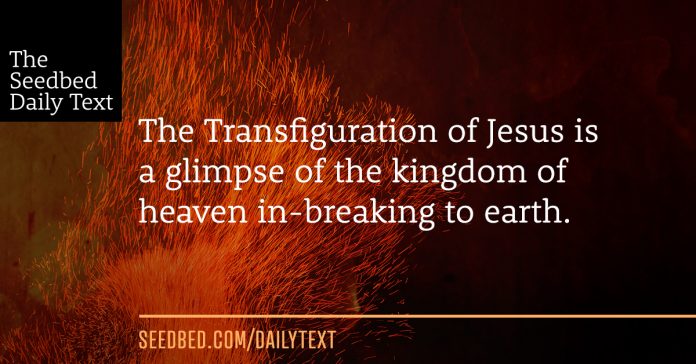 And he said to them, “Truly I tell you, some who are standing here will not taste death before they see that the kingdom of God has come with power.”
2 After six days Jesus took Peter, James and John with him and led them up a high mountain, where they were all alone. There he was transfigured before them. 3 His clothes became dazzling white, whiter than anyone in the world could bleach them. 4 And there appeared before them Elijah and Moses, who were talking with Jesus.

5 Peter said to Jesus, “Rabbi, it is good for us to be here. Let us put up three shelters—one for you, one for Moses and one for Elijah.” 6 (He did not know what to say, they were so frightened.)7 Then a cloud appeared and covered them, and a voice came from the cloud: “This is my Son, whom I love. Listen to him!”8 Suddenly, when they looked around, they no longer saw anyone with them except Jesus.9 As they were coming down the mountain, Jesus gave them orders not to tell anyone what they had seen until the Son of Man had risen from the dead. 10 They kept the matter to themselves, discussing what “rising from the dead” meant.

11 And they asked him, “Why do the teachers of the law say that Elijah must come first?”12 Jesus replied, “To be sure, Elijah does come first, and restores all things. Why then is it written that the Son of Man must suffer much and be rejected? 13 But I tell you, Elijah has come, and they have done to him everything they wished, just as it is written about him.”

We tend to spend a lot of time in life on the outer appearance only to realize as life progresses there’s only so much we can do with it. Somewhere along the way we hopefully abandon cosmetic improvements to awaken to the “inside” project, where no matter how old the outer structure, the inward reality can become utterly and completely transformed.

135. None of this, however, describes the scene in today’s text. Transfiguration is to transformation as Jesus is to Peter. The “Transfiguration” takes us up on a “high mountain” where we are privileged to see “through” the veil where we behold the almost indescribable reality of ultimate reality. This is neither a vision nor a dream. It is neither a glimpse of the future nor a remembrance of the past. Standing in the presence of Jesus with Peter, James and John, we behold the mysterious convergence of our storied past and our transfigured future in the present moment of the Presence of God. We hear from the Father, behold the glory of the eternal Son and breathe in the breath of the Holy Spirit.

We are glimpsing the timelessness of eternity breaking in on the present time. On that mountain, we are seeing “through” the veil that separates Heaven and Earth and glimpsing the Kingdom of God in all its glorious indescribable essence—”bright shining as the sun,” as the hymn has it.

This is the glorious end of all of the sanctifying grace of God, which is itself only the beginning of the unfathomable reality of “Your Kingdom come, your will be done, on Earth as it is in Heaven.” On that mountain, we behold the Life, everlasting in quality and quantity, for which we were made; the beloved community of all who have followed Jesus before us and who will come behind us together in the resplendent presence of the beloved God of all glory.

The justifying grace of salvation is the door. The sanctifying grace of transformation is the process. The perfecting grace of Transfiguration is the end. The only way there is through the cross of Jesus, apart from whom we have no hope of finding it. The Cross is the only cure for the terminal cancer of sin and death, but it has a 100% cure rate.

We know that the whole creation has been groaning as in the pains of childbirth right up to the present time. Romans 8:22.

The point of this text is not that we would clamor for this Mount of Transfiguration experience to happen again and this time for us. The point is for us to realize that what happened that day as we have it in Scripture, happened to and for us. Because we were there, we are there. This is not about mystical perception but concrete reality. May the Holy Spirit order our understanding and experience of the Word of God accordingly.

[To my scholarly minded friends—please do not interpret me as propagating some version of a post-millennial “realized eschatology.” I am speaking of the Transfiguration as a perfect glimpse through the veil into the Kingdom of God– which exists gloriously “already” and yet remains unquestionably “not yet.” And he said to them, “Truly I tell you, some who are standing here will not taste death before they see that the kingdom of God has come with power.”]

Spirit of the Living God, fall afresh on me. Lord Jesus, thank you for this moment in time when you pulled back the veil on ultimate reality. Empower my imagination to behold this scene. Even more, let the Father’s words pierce the veil of my heart and mind: Listen to him. Yes, Lord, I will listen to you. Melt me. Mold me. Fill me. Use me. For the glory of your name, Jesus. Amen.

What about the Transfiguration blows your mind the most? Is there a fresh takeaway for you?