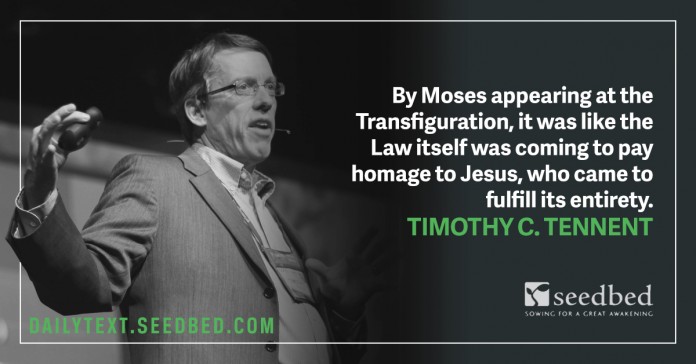 After six days Jesus took Peter, James and John with him and led them up a high mountain, where they were all alone. There he was transfigured before them. His clothes became dazzling white, whiter than anyone in the world could bleach them. And there appeared before them Elijah and Moses, who were talking with Jesus.

Peter said to Jesus, “Rabbi, it is good for us to be here. Let us put up three shelters—one for you, one for Moses and one for Elijah.” (He did not know what to say, they were so frightened.)

Then a cloud appeared and covered them, and a voice came from the cloud: “This is my Son, whom I love. Listen to him!”

Suddenly, when they looked around, they no longer saw anyone with them except Jesus.

As they were coming down the mountain, Jesus gave them orders not to tell anyone what they had seen until the Son of Man had risen from the dead. They kept the matter to themselves, discussing what “rising from the dead” meant.

And they asked him, “Why do the teachers of the law say that Elijah must come first?”

Jesus replied, “To be sure, Elijah does come first, and restores all things. Why then is it written that the Son of Man must suffer much and be rejected? But I tell you, Elijah has come, and they have done to him everything they wished, just as it is written about him.”

Today’s passage is on the Transfiguration of Jesus Christ. It is an early glimpse of his exalted glory, even as he prepares to face the humiliation of suffering on the cross. Mark is reminding us, on the eve of the passion, that even in his humiliation, Jesus is the exalted One. Indeed, it is in his humiliation and passion that we capture the deepest revelation of God’s glory.

When good Jews thought of the glory of God, their minds went back to Moses climbing Mt. Sinai with his face glowing and to the Shekinah of glory of God leading them through the wilderness. What they didn’t expect was that this same God in Jesus Christ, who climbs up this mountain and reveals the glory of God, but keeps walking up another mountain called Mt. Calvary to show the full extent of God’s glory through blood, suffering and tears. The mount of Transfiguration and mount Calvary together reveal the true glory of God.

Why do Moses and Elijah appear at the Transfiguration? Why not Abraham? Why not Isaiah? Why not two angels as happened on Easter? Why Elijah and Moses? This is a very intentional choice. Moses is the one who first saw a glimpse of the Shekinah glory in the burning bush. Moses is the one who led the Israelites out of their Egyptian bondage and to the promised land. But, most importantly, Moses was the one who gave them the Law. All through Jewish writings, Moses represents the Law. By Moses appearing at the Transfiguration, it was like the Law itself was coming to pay homage to Jesus, who came to fulfill its entirety.

Elijah, in Jewish reflection, came to symbolize and all the Prophets. All the prophets who came after Elijah nevertheless acknowledge his uniqueness and his importance. Because Elijah had not died a normal death, but was caught up in the chariot, the belief emerged that Elijah would return and testify to the Messiah. So, Elijah’s presence is like the entire prophetic tradition showing up and testifying that Jesus fulfills all the prophets. So, in Moses and Elijah the “Law” and the “Prophets” show up and testify that Jesus is the One to whom all things point.

If that is not enough, suddenly the divine voice from heaven speaks: “This is my Son, whom I love, listen to Him!” This is one of only three times where the Scripture records the Father speaking from heaven during his earthly ministry (baptism, transfiguration, and after his triumphal entry). This is the most dramatic!

Dramatically, the entire passage ends with the disciples looking up and “seeing only Jesus.” This is the great imperative of the Christian faith and, apparently, one of the easiest things to forget: it’s about Jesus Christ. It is not about us, or our programs; it is about Him. We are but gardeners in God’s field. We plant, we water, we pull up weeds, but it is God who causes the growth. Our job is to help people see Jesus.