Why Aren’t the Poor At Home In Our Churches?

10 When Jesus entered Jerusalem, the whole city was stirred and asked, “Who is this?”

11 The crowds answered, “This is Jesus, the prophet from Nazareth in Galilee.”

12 Jesus entered the temple courts and drove out all who were buying and selling there. He overturned the tables of the money changers and the benches of those selling doves.13 “It is written,” he said to them, “‘My house will be called a house of prayer,’ but you are making it ‘a den of robbers.’”

14 The blind and the lame came to him at the temple, and he healed them. 15 But when the chief priests and the teachers of the law saw the wonderful things he did and the children shouting in the temple courts, “Hosanna to the Son of David,” they were indignant.

16 “Do you hear what these children are saying?” they asked him.

“‘From the lips of children and infants
you, Lord, have called forth your praise’?”

17 And he left them and went out of the city to Bethany, where he spent the night.

“It is written,” he said to them, “‘My house will be called a house of prayer,’ but you are making it ‘a den of robbers.’”

O.K., so who is being robbed here? I’ve never thought to ask this question before of today’s text. I’ve always focused on the “my house will be called a house of prayer” part. Was it the ordinary Jewish citizenry? Was it that the money changers were adding too high a surcharge for their service? Theories abound and no-one can be sure.

I have a theory. I think the clue is in the next verse.

14 The blind and the lame came to him at the temple, and he healed them.

The blind and the lame were at the temple. I doubt they could afford even the lowest cost sacrifice. These were the poorest of the poor. They had come to God’s house seeking help and were likely not even seen or acknowledged. They were the ones being robbed. In fact, in response to Jesus healing the poor and the lame the chief priests and the teachers of the law were indignant. The whole system had become corrupt. The Temple was a place where the form of religion prevailed without the power. The house of God had become a haven for idolatry. The great sign of idolatry is the presence of injustice. The poorest of the poor were right in their own courts yet unseen. Just like those blind men on the side of the road were silenced by the system of the crowd.

I’ve never really been to a church where the poor would feel at home. I’ve been to a lot of churches who help the poor, but none that actually serve as a home for them. A house of prayer that is not a home for the poor is just another haven for idolatry— aka self-interested, self-serving religious activity.

Many churches want to do this, but it is complicated and hard. It’s the good fight though, and we must keep trying. And let’s not pin it on the church. Every Sunday, on my way to church, I drive right past a homeless man on the exit ramp of the freeway with a sign requesting help. I’ve put a dollar or five in his coffer before but I always drive away wondering, “Why didn’t I invite him to get in the van and go with us to church?”

Why didn’t I? That right there, my friends, is the question.

Lord Jesus, we confess we have not heard the cries of the needy. And maybe part of our problem is we have a category for such people. We call them needy. Somehow I don’t think that’s how you label them. You see them in the same way you see us. Would you help us to see them like you see them so they will no longer be a them but part of us. Yes, that’s it. Change our hearts to be like your heart, or reveal to us what our hearts are really like now. In your mercy, Lord Jesus, hear our prayers. Amen. 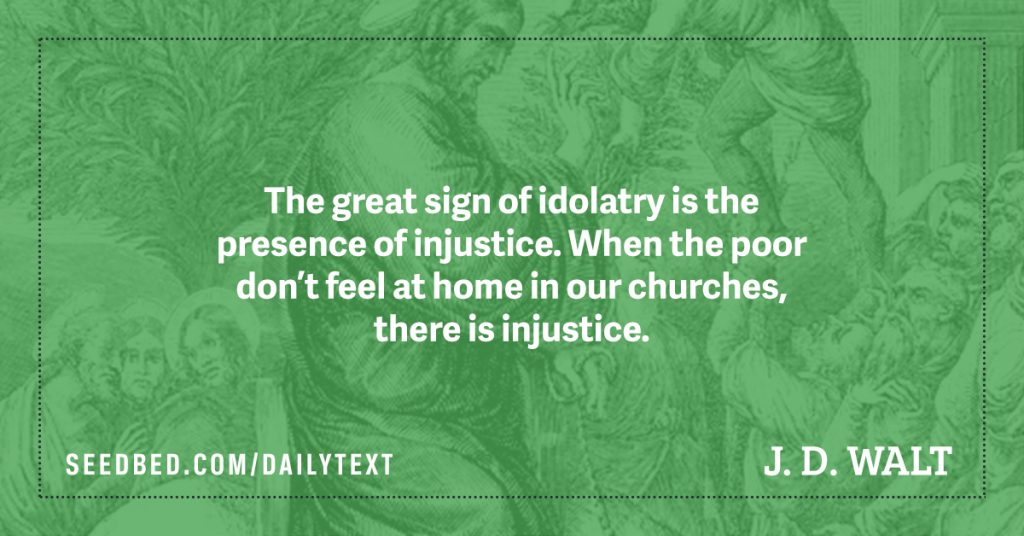 1. How do you see the connection between idolatry and injustice? Can you make the link?

2. Do you think it is ok for us to perpetuate this label of “needy” people? How would you feel if you were labeled “needy?”

3. So why do we readily put a few bucks in the coffer of the poor but not ask them to hop in the car and go down the street to church with us? What would need to change for that to happen?

Why Aren't the Poor At Home In Our Churches?