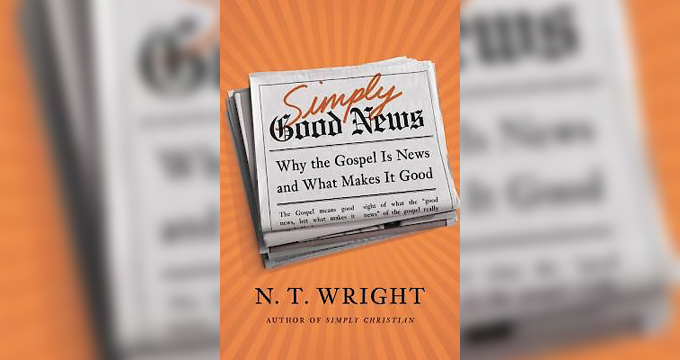 I can remember the first time I was exposed to N.T. Wright. A freshman in college on their (month-long) winter break has a lot of time on their hands. So, it was an ideal opportunity to pick up a book, and I delved into Paul: In Fresh Perspective. A few pages in, and I was hooked. Wright opened up the Greco-Roman and Jewish world, providing fascinating information that I’d never heard in the pulpit or in bible studies. Words such as lord, son of God, and even the gospel carried strong resonances in those first-century contexts. Wright’s explanation of that last word, the gospel, is what really got me thinking, revolutionizing my worldview. Had I misunderstood the gospel, or could it be that it had been presented in a way that wasn’t necessarily in tune with the biblical witness?

N.T. Wright’s newest, Simply Good News: Why the Gospel Is News and What Makes It Good, aims at clarifying what exactly the good news is, and why such an undertaking even matters. For those familiar with Wright, you won’t be too surprised by what he has to say. The well-articulated prose that you’ve come to expect from Wright is ever so present, and what he’s been saying about the gospel over the past 20+ years remains consistent. Yet, for those unfamiliar, you might be become bewildered by Wright’s claims.

The Function of Good News

In popular discourse, the “gospel” carries different connotations: “gospel” truth (an authoritative adjective); how one becomes a Christian (i.e., how one becomes saved); or even a musical genre. Yet, is this how the early Christians communicated the earth-shattering event of Jesus’ life, death, resurrection, and exaltation? Wright rightly draws out and harps upon three elements of what good news actually does:

“[It] is (1) to put a new event into an old story, (2) point to a wonderful future hitherto out of reach, and (3) so introduce a new period in which, instead of living a hopeless life, people are now waiting with excitement for what they know is on the way” (4).

In other words, inaugurated eschatology is infused within the good news: 1) something exciting has already happened, which will change everything; however, 2) the full scope of what will be has not yet come to completion. Therefore, 3) one is in an intermediate waiting period with the knowledge of what has happened and what will be.

Wright provides a somewhat contemporaneous example in the Greco-Roman context: 1) Octavian Caesar had won the great victory, meaning he is lord of the whole world. 2) Implementation would be put into effect, seen most supremely in Octavian’s return to Rome. 3) In the meanwhile, the citizens’ lives were changed resulting in proper preparation for Octavian’s return.

That’s how good news functioned, but what exactly is the good news?

Wright wants to stress, first, what it is not. As he has been preaching it for years: “The gospel is good news, not good advice!” Advice consists of “how to’s.” The good news isn’t how to get to heaven when you die; nor, is it on how to live life in the present. Wright doesn’t want to dismiss those good intentions, nor the fact that there can be good advice, but rather he wants to claim that that isn’t concerned primarily with the news centered upon what happened to Jesus of Nazareth, what will happen as a result, and what happens in the meantime. The content of these elements is fleshed out in the remainder of the book.

Here’s a summary of the gospel:

The good news is that the one true God has now taken charge of the world, in and through Jesus and his death and resurrection. The ancient hopes have indeed been fulfilled, but in a way nobody had imagined. God’s plan to put the world right has finally been launched….The good news was, and is, that all this has happened in and through Jesus; that one day it will happen, completely and utterly, to all creation; and that we humans, every single one of us, whoever we are, can be caught up in that transformation here and now. This is the Christian gospel. Do not allow yourself to be fobbed off with anything less (55).

In chapter four, Wright traces the “Distorted and Competing Gospels,” while chapter five challenges the reader to be “Rethinking Heaven” (see his Surprised by Hope). Time is of the essence, and so he dedicates chapter six to the “Wrong Future, Wrong Present.” Chapter seven reexamines why we should be “Surprised by God,” and finally Wright concludes with “Praying the Good News” by observing the Lord’s Prayer backwards.

Why Are We Revisiting the Gospel?

For some it may be newsflash that scholars over the last 10-15 years have been reexamining the good news. Isn’t it common sense? “You’re a sinner, who needs saving. Therefore, because God loves you Jesus died in your place so that you will go to heaven when you die, instead of hell. Believe in this and you are good to go.”

Let’s rewind to my first semester in college. I joined a campus ministry that is highly focused on evangelism. One of the first things the bible study leaders would ask you to do is articulate the gospel. Most freshmen can’t articulate the gospel. Why? Well, even though they are Christians (presumably), they didn’t discuss the particulars of the gospel in church. It was just assumed. They could probably recount everything in that paragraph above, but not in a concise manner. So we’d be taught the KGP tract (Know God Personally/Four Spiritual Laws).

Yet, I began to notice, this stuff doesn’t match up well with the data. The whole story of Israel is missing, truncated to generalized human sin at its best. We are the subjects, instead of Jesus. The focus is on personal salvation, more specifically a get-out-of-hell-free card. As Wright would say, “Heaven is important, but it’s not the end of the world.” None of these things listed are trivial, nor are they unimportant, but the emPHAsis is on the wrong sylLAble.

It might be worth asking why big name scholars such as N.T. Wright, Scot McKnight, and David deSilva are taking the time to write books on a subject that we so easily assume to be blatantly obvious. If they think we may have steered off course in communicating and understanding the most important news of world history, might we need to reexamine it, too?

I think as we venture into an increasingly post-Christian 21st century West, our situation will be very similar to the pre-Christian 1st century East. It’s time to get back to the basics: Gospel 101. It’s time for churches and seminaries to teach disciples a gospelology class to prepare us for gospeling in this age. We spend so much time on other things, but this might be where most of our attention should be placed. I suggest along with Simply Good News, you read, study, and teach Scot McKnight’s The King Jesus Gospel, David deSilva’s Transformation: The Heart of Paul’s Gospel, and (forthcoming) Michael Gorman’s Becoming the Gospel: Paul, Participation, and Mission. And when we relearn and proclaim the gospel, we shouldn’t be surprised when some view it foolishly, while others find it scandalous (1 Cor 1:23). Nevertheless, take heart: the power of God is present in the gospel (Rom 1:16).