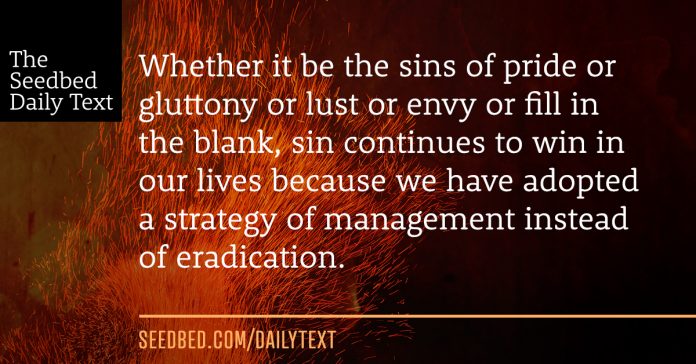 38 “Teacher,” said John, “we saw someone driving out demons in your name and we told him to stop, because he was not one of us.”

39 “Do not stop him,” Jesus said. “For no one who does a miracle in my name can in the next moment say anything bad about me, 40 for whoever is not against us is for us. 41 Truly I tell you, anyone who gives you a cup of water in my name because you belong to the Messiah will certainly not lose their reward.

“‘the worms that eat them do not die,
and the fire is not quenched.’

49 Everyone will be salted with fire.

50 “Salt is good, but if it loses its saltiness, how can you make it salty again? Have salt among yourselves, and be at peace with each other.”

There’s too much going on in today’s text to adequately cover in this brief venue. I’ll choose one: sin.

Jesus message is as stark as it is simple and can be brought down to three words: Sin is deadly.

On the one hand, Jesus employs the use of hyperbole yet on the other, he does not overstate his case. Sin means death. Sin doesn’t kill with the surgical strike of a bullet but like the slow cell scorching scourge of cancer.

It reminds me of the more modern day stories that get passed along to describe sin. There’s the story of how monkeys are caught in certain parts of the world. Trappers cut a small hole into a hollow gourd and fill it with the monkey equivalent of snicker bars. The monkey reaches into the gourd, gets a handful of the treats and when he tries to pull his hand out the hole is not large enough for his fist to fit through. The only thing between the monkey and freedom is his grip on the candy. He ultimately succumbs to the trap.

Then there’s the story of how wolves are trapped in certain parts of Alaska. They bury a very sharp knife down into the ice with only the tip of the blade exposed. On top of the blade they place a large hunk of raw meat. The wolf begins eating the meat and in the process cuts his tongue. Unable to distinguish the blood from the raw meat and the blood from his tongue, the wolf bleeds to death in the process of enjoying his last meal.

Of all the stories I’ve told my kids, they seem to remember these the most. They can tell these stories in striking detail. We get it. We understand what sin is and what it does and yet we still do it. Even the most dire warnings don’t manage to steer us clear of the seduction of sin. Jesus wants us to imagine taking a hatchet and hacking off our hand if it leads us into sin. Think about that. Maybe it would help if we actually got a hatchet and held it next to our hand and just contemplated the act of cutting it off. (PLEASE HEAR ME—I’M NOT ADVOCATING ACTUALLY CUTTING OFF A HAND!) Jesus goes to such lengths because sin is so deadly. He’s saying it would be better for you to endure the pain of amputation than the outcome of a tortured life of sin.

Maybe there’s another obvious message hiding within Jesus’ stern warning. What if he’s calling us to preemptive strategies as relates to sin abatement? Because of Jesus’ death on the cross, sin has lost its power over us. Yet somehow it remains powerful. Permit me to close today with a bit of frankness. Whether it be the sins of pride or gluttony or lust or envy or fill in the blank, sin continues to win in our lives because we have adopted a strategy of management instead of eradication. We choose sin management because we aren’t willing to do what sin eradication requires. Even worse, we deem the eradication of sin impossible. So what does sin eradication require? Thanks for asking.

It takes more than me and the Holy Spirit. It requires other people. Until I’m ready to let a couple of other people into the inner sanctum of my soul to help me overcome sin. . . . .

Spirit of the Living God, fall afresh on me. Lord Jesus, I confess too often my sin is a secret lover rather than a moral enemy. Open my eyes to see it how you see it; to truly understand what is at stake. Teach me to run from sin. Melt me. Mold me. Fill me. Use me. For the glory of your name, Jesus. Amen.

What’s your mentality with respect to sin: management or eradication? If you could eradicate one sin in your life starting now, which one would it be? Now what?