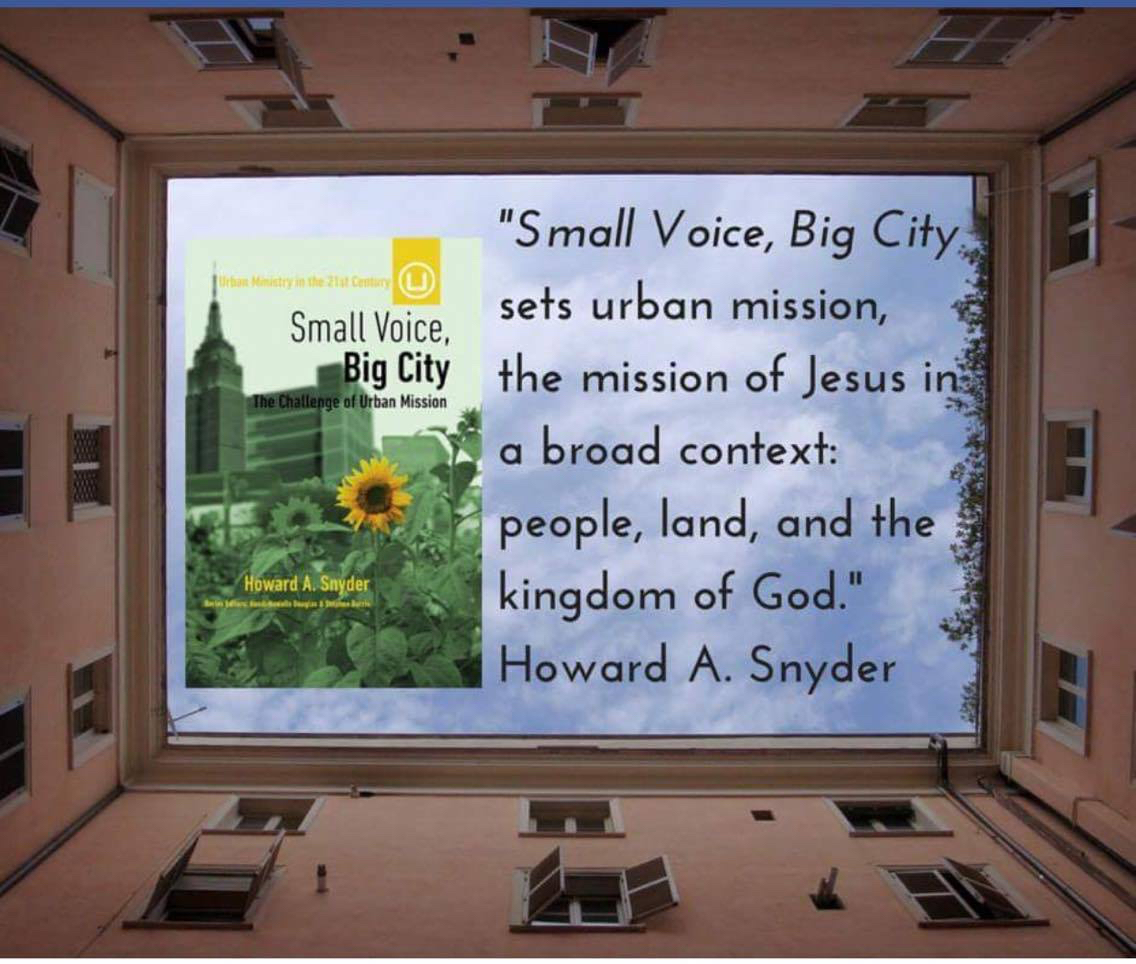 When he comes, Messiah “will not cry or lift up his voice, or make it heard in the street.” Yet “he will not grow faint or be crushed,” and in God’s own way and time he will establish “justice in the earth.” So says Isaiah 42:2–4.

Today the small voice of Jesus, Lord and Messiah, heard by the poor and humble and by honest truth-seekers, is the key to justice in the city. This is how, as the Apostle Paul’s wrote, God chooses “what is foolish in the world to shame the wise; . . . what is weak in the world to shame the strong.” God works through “what is low and despised in the world, things that are not, to reduce to nothing things that are, so that no one might boast” before him (1 Cor 1:27–29).

This is the wisdom of God in city streets.

Years ago a young urban missionary named Viv Grigg heard God’s voice. “I was in my little slum house in Tatalon, Manila,” Viv says. The small voice of mission “called, as clearly as the voice of a child: ‘Go up the river and preach.’ And like Philip, I went wandering, preaching, casting out demons—I had never done that before!—and caring for a drug addict. I went, seeing what God would do next.”

What God did next, through a series of steps of faith and obedience, was raise up an international movement of church planting and social transformation among the urban poor, including a Masters Degree in Transformational Urban Leadership now being offered in multiple locations around the world.

Believing and acting this way requires audacious faith—faith that can be enlivened and nurtured only in vital communities of Jesus followers who live out the Jesus Good News in the cities of the world.

So my new book Small Voice, Big City focuses on the power of the gospel—often outwardly weak, small, foolish—to heal the nations and redeem earth’s cities. The gospel proved powerful in the first-century world, when the church was born. It still is today.

Small Voice, Big City sets urban mission in a broad context: people, land, and the kingdom of God. Look through any number of books on urban mission and you’ll find next to nothing on land, ecology, or creation (in the sense of God’s ongoing relationship with the physical created order). Small Voice, Big City attempts to correct this oversight, this blind spot. It discusses people and their relationships, including their gifts, culture, worldviews, and modes of thinking. I focus especially on the relationship between people and land, since this is a vital bond we must have in order to survive and thrive.

The book sets all aspects of urban mission within the context of God’s reign. Whatever the specific context, people faithfully involved in urban ministry serve a transcendent mission and work within a transcendent hope. That hope is the kingdom of God—God’s will done on earth, in our cities, as in heaven. In victories, we see kingdom signs. In setbacks, sorrows, and defeats, we learn to trust God’s kingdom promises.

Urban mission isn’t just about cities. It is about the Good News of Jesus Christ. Although the book’s focus is Jesus’ Good News in urban contexts, the book’s scope is as wide as the gospel and God’s total plan of reconciliation. The book sets urban mission in the larger context of the gospel in the whole world.

The book begins with “The Ecology of Urban Mission” (Chapter One). Often urban mission is discussed as if land didn’t exist! Conversely, those who write about land sometimes rail against the big, bad city. This division is not only silly and unnecessary, it is toxic. Land and city are part of one ecology. We need to think and serve ecologically.

Chapter Two, “The Church as Community,” looks at the familiar image of community and asks what that really means in the context of mission in today’s urban world.

Chapter Three, “MacroTrends of the Twenty-First Century,” highlights key aspects of the world urbanites inhabit today. The chapter outlines ten large trends that are shaping and reshaping the church in relation to culture, beginning with the shift away from homogeneous churches and ending with emerging ecological sensitivity. It also notes countertrends, the challenge of Islam and other world religions, and the promises and perils of Christian “insider movements.”

Chapter Four, “The Kingdom of God Index,” asks: Can we know empirically whether urban mission is having any real long-term impact or not? Is it more true or less true that year by year God’s will is actually being done on earth as it is in heaven? Can we know?

This is a serious question that raises foundational issues. Today’s world abounds in global indicators of all sorts—a corruption index, freedom index, quality-of-life index. Is it unspiritual or heretical to propose a kingdom of God index? This chapter offers five reasons such an index, if carefully grounded biblically and missionally, could help dissipate fog and fuzzy claims, adding realism to urban witness.

Chapter Five, “Strategic Planning in Urban Mission,” asks about the role of planning in faithful witness and discipleship. I show how planning can legitimately be done if carried out in ways consistent with the kingdom of God. Planning considers the present and the near future while forming a prophetic ideal that looks ahead to the eschatological horizon (the kingdom of God in fullness). Such planning aims not at institutional success but at faithful witness to Jesus and his reign.

Chapter Six investigates “The Loss of Prophetic Christianity.” We note five critical signs of global crisis in Christian faith today. These include the church’s historic decline in the West, the problem of mere cultural Christianity, and the discipleship gap afflicting many churches globally, not just in the West. Part of the problem is the church’s loss of ancient wisdom. We also note the dawn of the Anthropocene Age. For the first time in history, humans have gained such technological mastery and such numbers that we are harming the planet itself. Urban mission must face this.

Chapter Seven, “Recovering Prophetic Christianity,” points the way forward. The end of Christendom may mean the rebirth of prophetic Christian witness in cities and nations of the world. I argue that recovering radically prophetic Christian faith requires understanding the earth, uncompromising biblical monotheism, robust Trinitarian faith, seeing salvation in a fully biblical way, present hope of God’s reign, and living visibly as the body of Christ.

Chapter Eight, “Renewing the Church, Restoring the Land,” returns to the key biblical and contemporary theme of land. Much “missional” literature is superficial because it ignores this biblical concern. Urban mission is not holistic if it ignores the land. The chapter concludes with a new vision of mission that takes both story and ecology seriously, as Scripture teaches us to do.

Chapter Nine, “Thinking Straight in a Tangled World,” notes different ways people think and how that affects mission. Conflicts and misunderstandings arise partly because of different thinking modes—which in turn reflect cultural and personal differences. I explain four models of thinking and acting: hierarchical, linear, cyclical, and ecological. These modes are embedded in and reflect culture. In fact we can read all human history through these models.

In the last chapter, we revisit the question of models of the church and their relevance for urban mission. I show how the ancient concept of sacrament, biblically grounded and contextualized to urban realities, can give urban Christians a profound sense of what redemptive mission is and can be today.

The book’s two Big Ideas are 1) the necessity of viewing urban mission with ecological awareness and sensitivity, and 2) the need to ground urban mission in the unique and powerful gospel of Jesus as revealed in Scripture and as incorporating both people and land.

Related to these is the theme of community and discipleship, itself a key biblical focus. The faithful church is a community of Jesus’ disciples living, serving, witnessing, thinking, suffering, celebrating, and acting within the world’s urban places.

Long ago the Prophet Elijah, fearing for his life, ran away to the mountains. He hid in a cave in “the mount of God,” Mount Horeb. God told Elijah to stand at the mouth of the cave.

It was God’s “still small voice,” the whisper of the Spirit.

Urban missioners today face strong tearing winds; earthquakes; fires. “Rockets’ red glare, bombs bursting in air,” whether literal or figurative. All such principalities and powers are ultimately under God’s control. All will be judged and all will be reconciled in Jesus Christ.

But God is not mainly in the fires or earthquakes or winds. God is in the “still small voice” of his Spirit who works quietly in people’s hearts and communities as they gather around Jesus and live in openness to each other, to the Spirit, and to the alien, the widow, the orphan, the stranger.

Faithful urban mission begins and ends here. Between the beginning and the ending, city Christians confront urban systems and all sorts of principalities and powers, using their varied gifts to engage all the currents, controversies, and conflicts addressed in this book.

Think again of Paul’s words to urban Christians in 1 Corinthians. God wisely “chose what is weak in the world to shame the strong” (1 Cor 1:27). “For God’s foolishness is wiser than human wisdom,” Paul noted, “and God’s weakness is stronger than human strength” (1 Cor 1:25).

This is not the way of the world, nor the way of much city life. But it is the gospel way, the way of truly wise community and witness in the world’s cities.

What cities need, above all, is love and wisdom—the wisdom and love of God incarnate in Christian men, women, children, in Christian community. Jesus is the key to integrated life and an integrated worldview in the city, in the midst of disintegration and seductive ideologies.

Christians are in the city because they love the city. They don’t love its evil and crises, its annoyances and intrusiveness, its false dichotomies. Many would prefer to live elsewhere—perhaps in a peaceful valley or lofty mountain or rural village. And many Christians who don’t live in cities pray for them, visit them for cultural events, help support Christians in urban mission in multiple ways.

We love the people in cities, and so we love the cities, even if with deep ambivalence.

But ultimately and wisely, we trust in God, knowing that he is fully able to fulfill all his good promises. We accept the gospel invitation to be coworkers with him in the great work of reconciliation in the city and in the land. We remember the assurance, “Perfect love casts out fear” (1 John 4:18). We trust God’s Word—his quiet, reassuring, sustaining voice.

I conclude the book with an afterword, “Mission Theology 2.0 – the Blogification of the Kingdom”—a dozen short blogs that amplify the book’s themes.