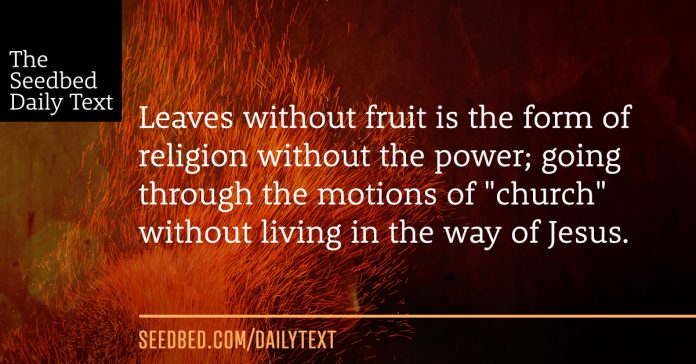 11 Jesus entered Jerusalem and went into the temple courts. He looked around at everything, but since it was already late, he went out to Bethany with the Twelve.

12 The next day as they were leaving Bethany, Jesus was hungry. 13 Seeing in the distance a fig tree in leaf, he went to find out if it had any fruit. When he reached it, he found nothing but leaves, because it was not the season for figs. 14 Then he said to the tree, “May no one ever eat fruit from you again.” And his disciples heard him say it.

15 On reaching Jerusalem, Jesus entered the temple courts and began driving out those who were buying and selling there. He overturned the tables of the money changers and the benches of those selling doves, 16 and would not allow anyone to carry merchandise through the temple courts. 17 And as he taught them, he said, “Is it not written: ‘My house will be called a house of prayer for all nations’? But you have made it ‘a den of robbers.’”

Two things we must ever guard against as the followers of Jesus: Soft pedaling or hard lining the hard teachings of Jesus.  We do a disservice to the church and damage to the Gospel when we err on either side.

We must recognize that Jesus said many things that require keen interpretation and nuanced understandings. We must do our best to understand the things he said in their original first century context and in the way they would have been understood by the ears who actually heard the words come out of his mouth.

Jesus cursing a fig tree that was not bearing fruit out of fruit bearing season is a tough teaching. It’s one of those texts we neither want to under interpret or over play or even worse, sweep under the rug.

My first remembrance of this text came in my glory days as a Youth Pastor. One Sunday night I decided to take my youth to a “Youth Revival” down the street at the Baptist Church. The guest revivalist preacher curiously chose this story about the fig tree for his “revival” text. He set up a stirring contrast between fruit and leaves, equating leaves without fruit as talking the talk without walking the walk. Leaves without fruit is the form of religion without the power; going through the motions of “church” without living in the way of Jesus. “Leaves,” he said over and over again, “will never get it done.”

You could have heard a pin drop. I must confess, at the time I was more than a little bit mortified. All of my stereotypes about Baptist youth revivalists had come true to the tenth power. Then he gave the invitation, further elucidating his perilous prophetic warning about having all the appearances of being a Christian with none of the authentic proof. I watched in a kind of Holy Spirit stupor as one by one the kids I brought to the revival made their way to the altar to, in all likelihood, give their lives to Jesus for the very first time, with their baptismal certificates—in a manner of speaking— in their hands.

Twenty five years later, I look back at that moment as a turning point for me. What at the time seemed like a gross overstatement of Jesus’ case, I today look at as a pretty fair rendering of what he meant.

On the evening after his arrival in Jerusalem, Jesus paid a quiet visit to the grand edifice of the Temple. He knew it had gone off the rails and I suspect he dreaded to some degree what had to be done. I suspect he didn’t sleep much that night. I suspect he woke wrestling with his Father about what had to happen and how it needed to be done. Jesus knew he would be signing his own death warrant if he went through with it. And on his way to the Temple he ran into this fig tree.

Here’s what I think happened as he reached through the leafy foliage to fruitlessly search for a fig. I think the Holy Spirit flashed images of prophets and their fig tree pronouncements through his mind like Jeremiah and Hosea and Joel and Micah and Isaiah.

It was as though the Holy Spirit was saying, “Here’s your sign.”

Then he said to the tree, “May no one ever eat fruit from you again.” And his disciples heard him say it.

Despite all the gracious warnings they had been given, Israel had not borne fruit; nor would they ever be it in season or out. They would split hell wide open with their baptismal certificates in their hands; declaring Abraham as their father with their lips while desecrating his faith with their lives.

I’ll close with a hard question for us today. Is my life all about leaves, or am I bearing fruit? Am I more concerned with how I am coming off on the outside than with who I am becoming on the inside? John Wesley made it a practice for the early Methodists to ask one another hard questions like these. At the top of his list was this one: Am I consciously or unconsciously creating the impression that I am better than others? In other words, am I a hypocrite?  Translation: Am I really the person I’m projecting on my Instagram?

Spirit of the Living God, fall afresh on me. Lord Jesus, thank you for the grace of speaking hard words to us. I ask you for the grace to take your hard words personally and seriously—for my good and for your glory. Melt me. Mold me. Fill me. Use me. For the glory of your name, Jesus. Amen.

Am I more concerned with how I am coming off on the outside than with who I am becoming on the inside?