Is Your House on Fire? - Seedbed
close
Menu 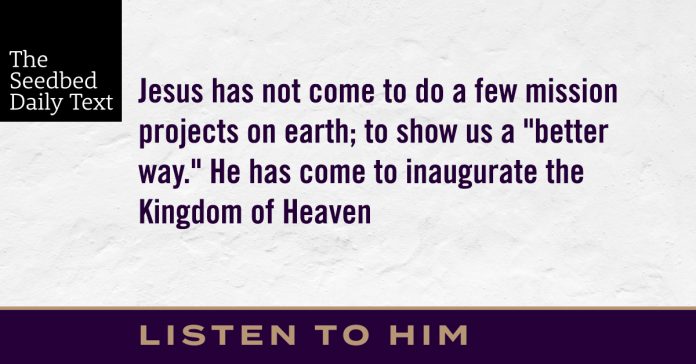 “I have come to bring fire on the earth, and how I wish it were already kindled! But I have a baptism to undergo, and what constraint I am under until it is completed!
Do you think I came to bring peace on earth? No, I tell you, but division. From now on there will be five in one family divided against each other, three against two and two against three. They will be divided, father against son and son against father, mother against daughter and daughter against mother, mother-in-law against daughter-in-law and daughter-in-law against mother-in-law.”
He said to the crowd: “When you see a cloud rising in the west, immediately you say, ‘It’s going to rain,’ and it does. And when the south wind blows, you say, ‘It’s going to be hot,’ and it is. Hypocrites! You know how to interpret the appearance of the earth and the sky. How is it that you don’t know how to interpret this present time?
“Why don’t you judge for yourselves what is right? As you are going with your adversary to the magistrate, try hard to be reconciled on the way, or your adversary may drag you off to the judge, and the judge turn you over to the officer, and the officer throw you into prison. I tell you, you will not get out until you have paid the last penny.”

Hang on. Did Jesus just say,

Do you think I came to bring peace on earth? No, I tell you, but division.

When the Bible seems to say something contradictory, rather than question its integrity or veracity, we must dig for a deeper understanding.

Let’s go back to the beginning of Luke’s Gospel. Remember the night when Jesus was born and the angels appeared to the Shepherds? Remember what they were declaring?

“Glory to God in the highest heaven,    and on earth peace to those on whom his favor rests.” 2:14

Do you remember what happened a bit later after Jesus was born? His parents took him to the Temple to be consecrated and they met up with Simeon, who prophesied over them and gave Mary this warning.

“This child is destined to cause the falling and rising of many in Israel, and to be a sign that will be spoken against, so that the thoughts of many hearts will be revealed. And a sword will pierce your own soul too.” 2:34-35

Within the span of fifteen verses we go from Jesus as a sign of  “peace on Earth” to Jesus as one who will bring division. It gives us a bigger context for our work of “listening to him” when he says things like,

Do you think I came to bring peace on earth? No, I tell you, but division.

Jesus has not come to do a few mission projects on earth; to show us a “better way.” He has come to inaugurate the Kingdom of Heaven, and in the process, to reveal the nature of the King of this Kingdom. He is bringing the mercy of a preemptive judgment. In other words, he offers anyone and everyone the present opportunity to “behold the signs of the in-breaking Kingdom of God,” and through this, to understand the true nature and character of God. As a result of this, Jesus offers us a free yet urgent invitation to respond by turning away from our misguided ideas about who God is and what God wants and to follow him.

It is our misguided notions of who God is and what God is like that wreaks havoc on the world. A hypocrite, in Luke’s understanding, is not a “fake.” A hypocrite is a person who orders their life around a false idea of who God is. This is why the Pharisees don’t repent. They are convinced in the “rightness” of their understanding and way of life. This is why often the so-called “believers” are far more dangerous than the “unbelievers.”

Jesus, by virtue of being who he is, brings division. It’s the most merciful thing he can do. People will either respond to him or not. That is the dividing line. Unfortunately, even families will divide over this. The amazing thing is he warns us of what is coming and the urgency of reorienting our lives accordingly. He is not making threats. He is simply telling us the truth. Judgment is coming. We live now in the age of mercy where there is still time.

“I have come to bring fire on the earth, and how I wish it were already kindled!

It reminds me of an old friend of mine named Ricky. Ricky became a follower of Jesus after a very destructive first half of his life. I remember him telling me of an encounter he had with one of his old friends from that old life. He approached this friend and said, “If I was driving past your house and saw that it was on fire would you want me to tell you?” The friend responded, “Of course!” Ricky replied, “O.K. then, you’re house is on fire,” and proceeded to share the Gospel with him. Some might call that confrontational. I think Jesus would call it compassionate.

Wake up out there! Things are heating up. Lent can’t be just another lap around the liturgical track. It is a holy opportunity for realignment. Let’s pay attention. Let’s listen to him. And don’t forget these words—100 times a day. Try saying the prayer in cadence with your steps today, a word per step.

How do you relate to this notion of the merciful divisiveness of Jesus?