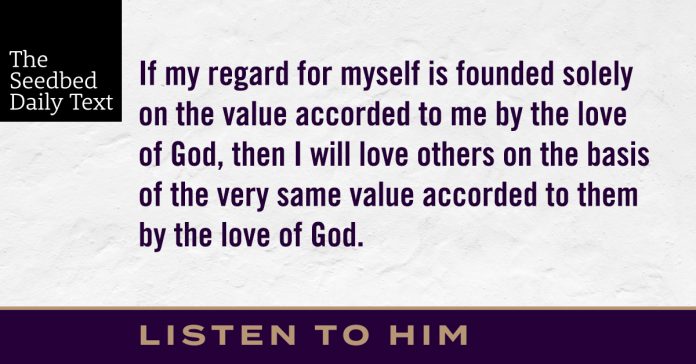 An argument started among the disciples as to which of them would be the greatest. Jesus, knowing their thoughts, took a little child and had him stand beside him. Then he said to them, “Whoever welcomes this little child in my name welcomes me; and whoever welcomes me welcomes the one who sent me. For it is the one who is least among you all who is the greatest.”“Master,” said John, “we saw someone driving out demons in your name and we tried to stop him, because he is not one of us.”“Do not stop him,” Jesus said, “for whoever is not against you is for you.”

Jesus really knows how to end an argument.

Do you remember that time when the prophet Isaiah wrote this?

Well, this thing going on in today’s text is what that is all about.

The ways of God are not only categorically but catastrophically different than our ways.

It’s easy to look at today’s text and dismiss it as an absurd example that we can’t imagine ever being a part of (i.e. having an argument with someone about who is greater).  .  . until we reflect on the unquenchable quest of just about every one of us to be #1 at something. It’s always amusing when the worst team in the league manages to upset a better team and all of a sudden all their fans are pompously pointing their index fingers into the air at the TV cameras with the redonkulous claim that  they are number 1!? Whether we can bring ourselves to admit it or not, his quest to be “the greatest” is in every last one of us.

So what’s the alternative? Should we just not care? Should we be complacent? Should we eschew winning and competing to be #1? That’s another one of our big problems; to jump to the other extreme, to assume that the opposite of something is always the same thing as the antithesis.

If we have any hope of ever “getting” the higher “thoughts” and “ways” of God (which according to Isaiah, could not possibly be more different than ours), we are going to have to #LISTENtoHIM.

In response to the disciples urinating contest, Jesus says about the most absurd thing imaginable to first century sensibilities. He gets a child and presents her to the disciples, saying,

Translation: “For my thoughts are not your thoughts, neither are your ways my ways.”

It’s hard for us to imagine the perceived worth-less-ness of a child in the first century context. A child had a status quotient of less than zero. They were seen as property that had essentially little to no value. The cumulative impact of these words alone on the comparative worth of children today is virtually inestimable. There just weren’t any helicopter parents to speak of in those days.

It’s mind-blowing. It’s the kind of thing you would only take seriously if God said it. And that’s pretty much what happened. So back to that “opposite isn’t always the antithesis” thought. In my mind, the opposite of “the greatest” would be “the worst.” I think Jesus makes the assertion that the antithesis of “the greatest” is “the most humble.” When Jesus speaks of becoming like a child in order to inherit the Kingdom of God, he is not saying (as we are wont to think) to become playful and whimsical and care free in the world. That would be to impose a 21st century meaning on a first century reality. Jesus is talking about becoming humble. He is talking about not considering our “status,” or that of anyone else, to be the measure of one’s worth.

After all, he’s the one, “who being in very nature God, did not consider equality with God something to be grasped, but made himself nothing.” (see Philippians 2)

It means the followers of Jesus don’t measure themselves or anyone else like the world measures them. If true greatness is ascribed to the least among us then in order to be great we must understand ourselves as on the level with the least. In order to do this, we must see ourselves and others from another perspective entirely; the perspective of God. God sees the exact same fundamental worth in every single human being

If I am to love others as I love myself and my regard for myself is founded on the ways I have managed to distinguish myself (or failed to distinguish myself) from everyone else, then I will love others to the extent that they have also distinguished themselves, and to the extent they have not, I will not value them. But, if my regard for myself is founded solely on the value accorded to me by the love of God, then I will love others on the basis of the very same value accorded to them by the love of God. This approach actually destroys the world’s value system of least and greatest, and isn’t that what someone who says of an apparently worthless person (i.e. a first century child) that they are the greatest, is essentially saying?

This approach, taken to its logical conclusion, ends with the God-given grace to genuinely love the poor rather than just pity them by helping them out with our spare change. Jesus will later say, “as you have done unto the least of these my brethren, you have done it also to me.” It’s only by the mercy of God that we will finally understand that no matter how different we are from one another and how vast the distance may be between our social status, we have the exact same value. This is the economy of grace. It’s what makes grace amazing. It’s why grace is the remedy to everything that’s wrong with the world. It’s the only remedy. Everything else is just a temporary fix, a work around, a band-aid.

This is the extraordinary change that God works in the human heart over a long period of time. It’s why salvation can’t be reduced to a transaction. Salvation is the lifelong process of conversion, of change from one degree of glory to the next. It comes from beholding Jesus, listening to him, and doing what he says. That never fails.

Hey, thanks for going the extra 100-word inning with me today. I may have bitten off more than I could chew, but I felt like I was onto something I couldn’t let go of.  This is earth-shaking stuff. It’s the kind of truth we will never find apart from listening to Jesus.

How is your own sense of worth tied up with your accomplishments or social status or lack thereof? Have you realized that your own system of self-worth is the way you treat others? What are the implications of this belief?