Believe Big in the Power of Small - Seedbed
close
Menu 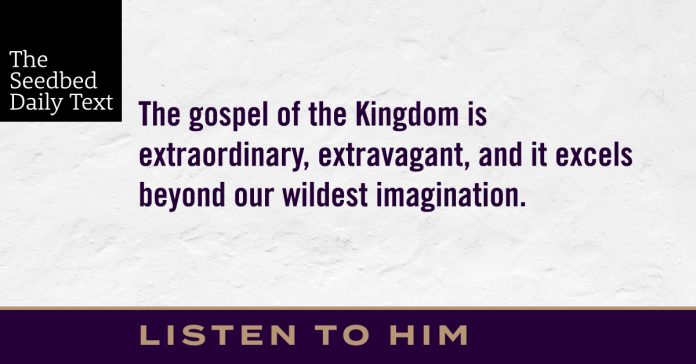 Then Jesus asked, “What is the kingdom of God like? What shall I compare it to? It is like a mustard seed, which a man took and planted in his garden. It grew and became a tree, and the birds perched in its branches.”

Again he asked, “What shall I compare the kingdom of God to? It is like yeast that a woman took and mixed into about sixty pounds of flour until it worked all through the dough.”

Then Jesus went through the towns and villages, teaching as he made his way to Jerusalem.Someone asked him, “Lord, are only a few people going to be saved?”

He said to them, “Make every effort to enter through the narrow door, because many, I tell you, will try to enter and will not be able to. Once the owner of the house gets up and closes the door, you will stand outside knocking and pleading, ‘Sir, open the door for us.’

“But he will answer, ‘I don’t know you or where you come from.’

“Then you will say, ‘We ate and drank with you, and you taught in our streets.’

“But he will reply, ‘I don’t know you or where you come from. Away from me, all you evildoers!’

“There will be weeping there, and gnashing of teeth, when you see Abraham, Isaac and Jacob and all the prophets in the kingdom of God, but you yourselves thrown out. People will come from east and west and north and south, and will take their places at the feast in the kingdom of God. Indeed there are those who are last who will be first, and first who will be last.”

A few observations about these two parables that open our reading for today.

2. Jesus big point is that a tiny seed is capable of producing something far greater than itself; in this case a great tree.

5. To further demonstrate the nature of the Kingdom of God, Jesus takes us into the domain of a woman in the first century, her kitchen. That’s way out of the box for the first century to even make such an absurd analogy.

6. Like the mustard seed, yeast has power far disproportionate to its size. In this case, the tiny bit of yeast works through sixty pounds of flour, making enough bread to feed hundreds of people.

The Gospel of the Kingdom is extraordinary, extravagant, and it excels beyond our wildest imagination. That’s why Paul would later say things like this,

Now to him who is able to do immeasurably more than all we ask or imagine, according to his power that is at work within us, to him be glory in the church and in Christ Jesus throughout all generations, for ever and ever! Amen. Ephesians 3:20-21

Later Jesus will tell us when our faith is anchored in a Gospel like this, it only takes faith the size of a mustard seed itself. We need mercy to have even a smidgen of the capacity it takes to fathom such possibilities as these.

Lord Jesus Christ, Son of God, have mercy on me a sinner.

What would it mean for you to see and understand yourself as a sower of the kingdom of God? Today?