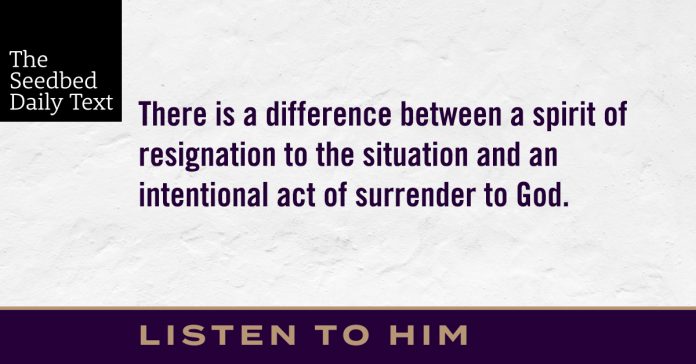 At that time some Pharisees came to Jesus and said to him, “Leave this place and go somewhere else. Herod wants to kill you.”

He replied, “Go tell that fox, ‘I will keep on driving out demons and healing people today and tomorrow, and on the third day I will reach my goal.’ In any case, I must press on today and tomorrow and the next day—for surely no prophet can die outside Jerusalem!

“Jerusalem, Jerusalem, you who kill the prophets and stone those sent to you, how often I have longed to gather your children together, as a hen gathers her chicks under her wings, and you were not willing. Look, your house is left to you desolate. I tell you, you will not see me again until you say, ‘Blessed is he who comes in the name of the Lord.’”

We learn something incredibly important from listening to Jesus in today’s text. It’s subtle but it can make all the difference, especially in hard times.

Jesus knows the inevitable outcome that awaits him in Jerusalem. He has spoken explicitly about it to his disciples since coming down from Transfiguration Mountain. He knows he faces an awful ordeal on the horizon.

Rather than accepting the inevitable future, he abandons himself to God. Jesus is defiant in the face of death because he is secure in the hands of his Father. He knows there will be a “third day” on the other side of the Cross. He knew he was held by the kind of power that never fails, that “never gives up, that always protects, always trusts, always hopes, always perseveres.” In short, he knew because he was held by the power of Love that he could Love powerfully all the way to the end and beyond.

One of my favorite Charles Wesley hymn lyrics comes in the third verse of the the great Apostolic Anthem, And Can it Be.

He left his Father’s throne above, so free so infinite his grace. Emptied himself of all but Love and bled for Adam’s helpless race.

This is the goal of we who follow him and as we abandon ourselves to him, he will accomplish it in and through us. This is the great secret to the crisis and process of sanctification: To empty ourselves of all but Love. He bled so we could become. Life’s hardest experiences offer the opportunities for Love’s greatest exploits– come what may.

I witnessed something of aspect of discipleship from my friend and mentor, Maxie Dunnam, a  decade or so ago when I served under his leadership at Asbury Seminary. We were going through an extremely challenging season at the seminary owing to the devastating impact of the post-Enron economic collapse on the strength of the school’s endowment. It was creating tremendous stress and strain on a lot of people and chiefly on Dr. Dunnam, who was the President of the school.

I remember him sharing with me a word of wisdom he had received from the Lord in the midst of it all. He put it this way. “God is teaching me the difference between a spirit of resignation to the situation and an intentional act of surrender to God.” This word encouraged him to resolve himself to a deeper consecration to God in the face of the challenge rather than resigning himself to the apparent inevitabilities of a situation out of his control. Those were difficult days, and we have the scars to prove it, but God brought us through and made us better in the process.

Let me close with a word of encouragement. Whatever you may be facing—a diagnosis of cancer, a crumbling marriage, financial ruin, prodigal sons or daughters, the pain of rejection, a very uncertain future—don’t resign yourself to some inevitable outcome, reject mere optimism and renounce pessimism. Surrender to the inevitability of the undefeatable Love of God. Abandon yourself to Jesus, the One who has abandoned himself for you

How do you see the difference between a spirit of resignation to a circumstance and an intentioned surrender to God in the midst of it? Remember a time like that?