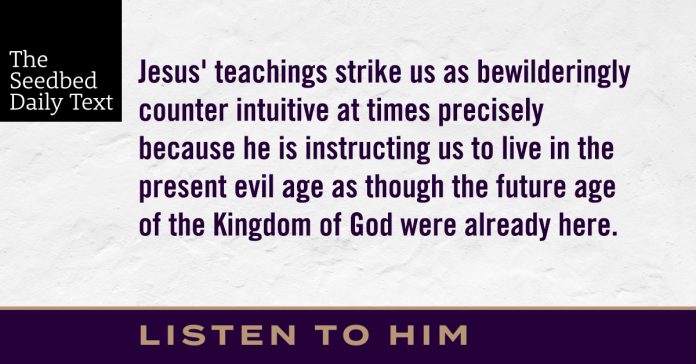 Jesus told his disciples: “There was a rich man whose manager was accused of wasting his possessions. So he called him in and asked him, ‘What is this I hear about you? Give an account of your management, because you cannot be manager any longer.’

“The manager said to himself, ‘What shall I do now? My master is taking away my job. I’m not strong enough to dig, and I’m ashamed to beg— I know what I’ll do so that, when I lose my job here, people will welcome me into their houses.’

“So he called in each one of his master’s debtors. He asked the first, ‘How much do you owe my master?’

“The manager told him, ‘Take your bill, sit down quickly, and make it four hundred and fifty.’

“Then he asked the second, ‘And how much do you owe?’

“‘A thousand bushels of wheat,’ he replied.

“He told him, ‘Take your bill and make it eight hundred.’

“The master commended the dishonest manager because he had acted shrewdly. For the people of this world are more shrewd in dealing with their own kind than are the people of the light. I tell you, use worldly wealth to gain friends for yourselves, so that when it is gone, you will be welcomed into eternal dwellings.

“Whoever can be trusted with very little can also be trusted with much, and whoever is dishonest with very little will also be dishonest with much. So if you have not been trustworthy in handling worldly wealth, who will trust you with true riches? And if you have not been trustworthy with someone else’s property, who will give you property of your own?

For starters note Jesus is setting the parable up in the framework of the present age, which is characterized by the brokenness caused by evil, and the age to come, which is characterized by the Kingdom of God, which is already breaking in through his ministry. Jesus’ teachings strike us as bewilderingly counter intuitive at times precisely because he is instructing us to live in the present evil age as though the future age of the Kingdom of God were already here. In fact, when we live in this fashion, the watching world witnesses something of the good-overcoming-evil presence and power of God in the here and now. Jesus’ life offers us an ever-unfolding moving picture of this reality and through the sending of the Holy Spirit, he designs for his life to continue unfolding through the lives of his people. As Jesus was on earth, so we are becoming.

In short, when we live our lives as though the yet to come Kingdom of God were now afoot in the world, it causes one of two outcomes: People will come to believe in God and enter the Kingdom, or they will reject God in favor of the short lived gains the world has to offer. Discipleship, or following Jesus, is all about learning to live this kind of Kingdom of God life in the real world.

It’s why we keep on praying, “Lord Jesus Christ, son of God, have mercy on me a sinner.” Remember, “sinner” simply names the condition into which we are born; the world gone wrong because unfortunately Adam and Eve “ate the apple,” to put it in Lily’s terms. The greatest danger we face in life is the failure to come to grips with this truth and to turn away from evil and turn to God. The more we make our life “work” in the present age, the less apt we are to welcome any sort of way of life that works against it.

So what makes our life seemingly work well in this present age? The amassing of power through hoarding wealth, seeking identity in status, honor and prestige, and worst of all, cloaking our efforts to gain power, wealth and status in the name of God through public demonstrations of our “awesomeness.” Summarizing– living a life where everything is driven by the constantly-calculating math of  self-interest. (This is why soon Jesus will point to a widow and two coins to teach us that generosity is never a matter of how much you give but how much you keep.)

So what does today’s text have to do with all of this-  in a hundred words or less? Back to the math lesson. Jesus tells us to learn from the shrewd and dishonest manger, who used his master’s money to make friends with his master’s debtors (also people of great means who could pay him back, i.e. 1000 bushels of wheat, etc.) in order to secure favors from them in his soon to be unemployed state.

Jesus teaches us to bank our security not in the present age, which is passing away but in the age to come, which will never end. We do this by using power, wealth and status to secretly make friends who can never pay us back; namely, people who don’t have power, wealth and status. It means throwing away the calculator in favor of what I like to call “higher math.” It’s a math that will never “add up” in the present age and yet when people see it at work their eyes will be lifted to God, because they will have had a preview of the age to come– which in essence is a review of the world as it began (before Adam and Eve ate the apple). This is the world that God is now making.

This is hard stuff. Self interest dies a thousand deaths, but the greatest danger of all is the deception of pride which keeps us from the self knowledge of our self interest. It’s why we keep on saying . . .

Do you tend to be more and more at home with the way the world works in the present evil age—in other words, is it working for you? Or less and less at home with it?