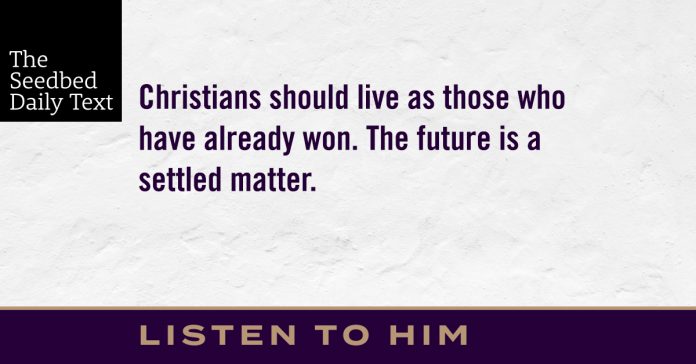 As the time approached for him to be taken up to heaven, Jesus resolutely set out for Jerusalem. And he sent messengers on ahead, who went into a Samaritan village to get things ready for him; but the people there did not welcome him, because he was heading for Jerusalem. When the disciples James and John saw this, they asked, “Lord, do you want us to call fire down from heaven to destroy them?” But Jesus turned and rebuked them. Then he and his disciples went to another village.As they were walking along the road, a man said to him, “I will follow you wherever you go.”Jesus replied, “Foxes have dens and birds have nests, but the Son of Man has no place to lay his head.”He said to another man, “Follow me.”But he replied, “Lord, first let me go and bury my father.”Jesus said to him, “Let the dead bury their own dead, but you go and proclaim the kingdom of God.”Still another said, “I will follow you, Lord; but first let me go back and say goodbye to my family.”Jesus replied, “No one who puts a hand to the plow and looks back is fit for service in the kingdom of God.”

There’s a lot we could delve into today, including Samaritan hospitality, Apostolic napalm, the homelessness of God and such. As I worked through today’s text one word stands out to me and I think it captures not only today’s passage, but one of the key essences of following Jesus and especially LISTENING TO HIM.

If you’d like, take a minute and read back through the text and see what one word stands out to you as capturing today’s passage and clarifying a key dynamic of discipleship. (O.K., I’m going to get a second cup of coffee while you do that)

So what did you come up with? Here’s my answer: Resolutely.

As the time approached for him to be taken up to heaven, Jesus resolutely set out for Jerusalem.

First, note the prefatory words here. [Sidebar] Remember, there are no superfluous words in the Word of God. Every single word matters. They all hold infinite revelation—not in a magical way and certainly not in some relativistic way, but in a meaning way. I cannot over stress the need for the People of God (i.e the Church) to raise the bar on our engagement with the Word of God. Our aim is not to “master” the text but to be “mastered by” the text. Because I know that’s why you read the Daily Text, that’s why I write it. [End of Sidebar]

As the time approached for him to be taken up to heaven,

Our relationship with Jesus, our discipleship, must be framed in terms of the big picture. Note, Luke doesn’t say, “As the time approached for him to be betrayed, handed over to the religious authorities, mocked and beaten by Roman soldiers, sentenced by a middle manager of Caesar, nailed to a cross, and buried in a tomb.” No, Luke takes the long view, he sees past the suffering, even beyond the resurrection and all the way to the enthronement of Jesus at the right hand of the Father.

Clearly Jesus knew this unspeakable suffering was coming and he spoke explicitly about it to his disciples, but he always held a bigger picture. He took the long view. Isn’t that what the writer of Hebrews was getting at when he said,

For the joy set before him he endured the cross, scorning its shame, and sat down at the right hand of the throne of God. Hebrews 12:2

The followers of Jesus take the long view. This doesn’t mean some kind of easy escapism or a defeated resignation to simply endure the hardships ahead. It doesn’t mean delaying life until after death. It’s not a “Things are going to get better, someday,” approach. It’s not a grit your teeth and bear it mentality.

The soundtrack for the followers of Jesus is not, “Some sweet morning when this life is over, I’ll fly away.” The soundtrack for discipleship is more like, “We will rock you!” and “We are the Champions!” albeit in a humble sort of way. I am indebted to the British theologian, Jeremy Begbie, for this insight from one of his lectures where he said, “Christians do not hope “in” the future. We hope “from” the future.” In other words, we aren’t hoping everything is going to turn out ok in the end. We live as those who have already won. The future is a settled matter. Because of Jesus, the future is as fixed as the Sun. Our hope is not rooted in our hopefulness. It is securely anchored in the settled future. We hope “from” the future.

Jesus resolutely set out for Jerusalem.

Back to our word of the day, “Resolutely.” Resoluteness in the present comes from  confidence in the future. Resoluteness, in the way of Jesus, is not about a “you can do whatever you set your mind to,” self confident, doggedly determined, boot-strapping your way, “Little Engine That Could” work ethic. Resoluteness, in the way of Jesus, comes from an umbilical-like life-support relationship with Jesus because He not only holds our future, He is our future. It’s why the Apostolic Writers wrote things like,

Who shall separate us from the love of Christ? Shall trouble or hardship or persecution or famine or nakedness or danger or sword? As it is written:“For your sake we face death all day long;    we are considered as sheep to be slaughtered.”No, in all these things we are more than conquerors through him who loved us. For I am convinced that neither death nor life, neither angels nor demons, neither the present nor the future, nor any powers, neither height nor depth, nor anything else in all creation, will be able to separate us from the love of God that is in Christ Jesus our Lord. Romans 8:35-39.

Therefore, since we are surrounded by such a great cloud of witnesses, let us throw off everything that hinders and the sin that so easily entangles. And let us run with perseverance the race marked out for us, fixing our eyes on Jesus, the pioneer and perfecter of faith. Hebrews 12:1-2

Somebody stop me! No matter what obstacle or hardship or disease or persecution or difficult future you are facing today or cross you may be bearing tomorrow . . . don’t be afraid of it . . . don’t resign yourself to it. . . . . don’t try to be strong and triumphalistic about it . . . instead, invite the Holy Spirit to fill you with a “joy set before us” unshakable confidence in the future and to empower you in your inner being with the very resoluteness of Jesus to “be alive with a life beyond your own” in the face of it. This is what he does.

How do you understand the difference between hoping in the future and hoping from the future? What does this have to do with your present?