Act As If - Seedbed
close
Menu 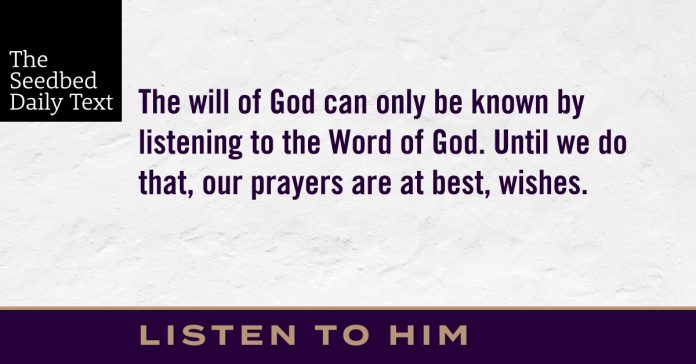 Now on his way to Jerusalem, Jesus traveled along the border between Samaria and Galilee. As he was going into a village, ten men who had leprosy met him.
They stood at a distance and called out in a loud voice, “Jesus, Master, have pity on us!” When he saw them, he said, “Go, show yourselves to the priests.” And as they went, they were cleansed.
One of them, when he saw he was healed, came back, praising God in a loud voice. He threw himself at Jesus’ feet and thanked him—and he was a Samaritan.
Jesus asked, “Were not all ten cleansed? Where are the other nine? Has no one returned to give praise to God except this foreigner?” Then he said to him, “Rise and go; your faith has made you well.”

We are about to enter the home stretch and make the turn into Jerusalem. It’s been a long and meandering journey for Jesus and his disciples. They have traversed between the impeccably religious and the ignominious rejects. They’ve been entertained in the homes of the social elite and they’ve walked among the tombs to cast out legions of satanic demons. In one breath Jesus rebukes the proud and in the next he restores the poor.

This journey sounds familiar doesn’t it? It’s the same world we live in. We walk down those same paths; the in-group and the outcasts, the incomprehensibly wealthy and the inconsolably broken. We, too, want to associate with people who raise our social profile and there are more than a few kinds of people we don’t want to be caught dead with.

Through it all, from there to here and from then to now, we have labored to keep our focus on the one necessary thing: Listening to Jesus, the Son of God, the Messiah. From the first century to the twenty first, following Jesus is truly and extraordinary thing.

In today’s text he teaches us another profound lesson. You will remember yesterday his disciples asked him to increase their faith. He responded by telling them they needed but a tiny mustard seed’s worth to move heaven and earth. It’s another way of saying faith is not an asset we build and hold on to. Faith is not mere belief, but human activity born of confidence in God’s possibilities.

Tomorrow he will draw from the drama of a court of law to teach us yet another lesson about faith. Today, however, we get a glimpse of exactly what the kind of faith he is looking for looks like. Here are the words I want us to listen carefully to:

“Go show yourselves to the priests.”

You read the text. Listen to the lepers cry of faith: “Jesus, Master, have pity on us.” It sounds like the prayer we’ve been praying every day. The most theologically astute minds in the country missed what these untouchable exiles got. They knew his name. They knew his rank. And they knew their need. “Jesus, Master, have pity on us.” Despite all their misfortune and countless losses, they had not given up on the tender mercy of a compassionate God.

All Jesus had to do was say the word. Their predetermined posture had formed itself into a kind of preemptive obedience.

“Go show yourselves to the priests.”

This is the remarkable part. He told them to do what a leper who was cleansed would do; to go to the Temple and have a priest certify their cure and readmit them into the community. They didn’t close their eyes for a time of prayer and meditation. They didn’t look down and gaze at their skin to see if the miracle was actually happening. They simply went. They didn’t need a sign or proof or even reassurance to just do it. They just did it. The next seven words tell the story:

And as they went, they were cleansed.

We’re asking Jesus to write a check while he’s telling us the check has been written. All that remains to do is to cash it. People tend to get it exactly backwards, thinking if we can name it, God will claim it for us. The name it and claim it approach only works when  God does the naming. Faith is the actual activity of doing the claiming.

The will of God can only be known by listening to the Word of God. Until we do that, our prayers are at best, wishes. Until our lives find their deepest moorings in the Word of God and our greatest delight in doing the will of God, our best laid intentions to “have faith” result in little more than empty, easy “believism.”

These ten lepers acted “as-if.” They moved as though the miracle had happened. And it only happened as they moved. And as they went, they were cleansed. If they had waited for their cure to come first, they would still be standing there.

There’s so much more to learn from Jesus in this story, and by the mercy of God Jesus will bring us back to this place again.  The only necessary thing now is act on what we have learned. The interesting thing about the Hebrew word for “obey” means “to hear.”

So where in your life might Jesus be calling you to act “as-if”? Are you listening? It’s the most important thing in your life right now.

What effect or impact is our daily praying these prayers having on you? What about this notion of a predetermined posture of humility becoming a kind of preemptive obedience of faith?