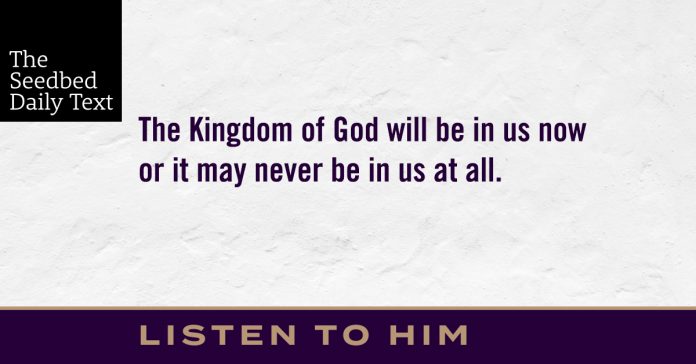 Once, on being asked by the Pharisees when the kingdom of God would come, Jesus replied, “The coming of the kingdom of God is not something that can be observed, nor will people say, ‘Here it is,’ or ‘There it is,’ because the kingdom of God is in your midst.”Then he said to his disciples, “The time is coming when you will long to see one of the days of the Son of Man, but you will not see it. People will tell you, ‘There he is!’ or ‘Here he is!’ Do not go running off after them. For the Son of Man in his day will be like the lightning, which flashes and lights up the sky from one end to the other. But first he must suffer many things and be rejected by this generation.“Just as it was in the days of Noah, so also will it be in the days of the Son of Man. People were eating, drinking, marrying and being given in marriage up to the day Noah entered the ark. Then the flood came and destroyed them all.“It was the same in the days of Lot. People were eating and drinking, buying and selling, planting and building. But the day Lot left Sodom, fire and sulfur rained down from heaven and destroyed them all.“It will be just like this on the day the Son of Man is revealed. On that day no one who is on the housetop, with possessions inside, should go down to get them. Likewise, no one in the field should go back for anything. Remember Lot’s wife! Whoever tries to keep their life will lose it, and whoever loses their life will preserve it. I tell you, on that night two people will be in one bed; one will be taken and the other left. Two women will be grinding grain together; one will be taken and the other left.”“Where, Lord?” they asked.He replied, “Where there is a dead body, there the vultures will gather.”

The Kingdom of God will be in us now or it may never be in us at all.

For my money, this pretty much sums up what I’m hearing from Jesus in today’s text.

In their quest for control, the Pharisees wanted signs. They wanted to get it in their date books. To this question Jesus says two things.

“The time has come,” he said. “The kingdom of God has come near. Repent and believe the good news!” Mark 1:15

This is what this journey to Jerusalem has been all about. Jesus is making disciples of the Kingdom of God. He is training men and women to live under the gracious rule of God. He is preparing us for eternal life in the Kingdom which is already here and still yet to come in all its glory.

He’s effectively saying: The Kingdom of God will be in us now or it may never be in us at all.

Repentance means turning away from the broken world order, from the corruption of the present evil age, and aligning one’s life with the now present Kingdom of God. When the Kingdom finally comes in all its glorious fullness, it will be too late to decide.

In a very real sense, Jesus is ever saying, “It’s now or never.” Why do I say this? Because of the stories Jesus cites.

See what I mean? It’s always now or never. Why? Two reasons: Noah and Lot. Everything was rolling along just like always until it wasn’t. In what seems like an instant, everything changed. Eating, drinking, buying, selling, marrying, planting and building are all good things. That’s what we do. It’s ordinary, every day, garden variety life. Then it will happen, the Son of Man will come; like a thief in the night. Is this because Jesus wants to catch people off guard. Heavens no! He’s telling us all of this in order to prevent that from happening.

All of this reminds me of my favorite C.S. Lewis quote. I’ll end with it.

“When the author walks on to the stage the play is over. God is going to invade, all right: but what is the good of saying you are on His side then, when you see the whole natural universe melting away like a dream and something else – something it never entered your head to conceive – comes crashing in; something so beautiful to some of us and so terrible to others that none of us will have any choice left? For this time it will God without disguise; something so overwhelming that it will strike either irresistible love or irresistible horror into every creature. It will be too late then to choose your side. There is no use saying you choose to lie down when it has become impossible to stand up. That will not be the time for choosing; it will be the time when we discover which side we really have chosen, whether we realised it before or not. Now, today, this moment, is our chance to choose the right side. God is holding back to give us that chance. It will not last for ever. We must take it or leave it.”

What do you make of this now or never quality of the kingdom of God? How does this affect your sense of urgency?