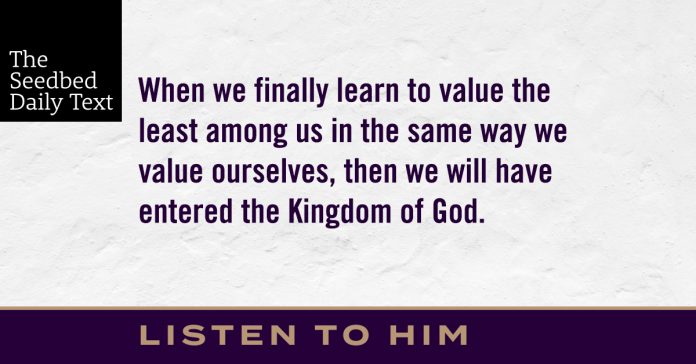 Then Jesus told his disciples a parable to show them that they should always pray and not give up.He said: “In a certain town there was a judge who neither feared God nor cared what people thought.And there was a widow in that town who kept coming to him with the plea, ‘Grant me justice against my adversary.’ “For some time he refused. But finally he said to himself, ‘Even though I don’t fear God or care what people think, yet because this widow keeps bothering me, I will see that she gets justice, so that she won’t eventually come and attack me!’” And the Lord said, “Listen to what the unjust judge says. And will not God bring about justice for his chosen ones, who cry out to him day and night? Will he keep putting them off? I tell you, he will see that they get justice, and quickly. However, when the Son of Man comes, will he find faith on the earth?”
To some who were confident of their own righteousness and looked down on everyone else, Jesus told this parable: “Two men went up to the temple to pray, one a Pharisee and the other a tax collector. The Pharisee stood by himself and prayed: ‘God, I thank you that I am not like other people—robbers, evildoers, adulterers—or even like this tax collector. I fast twice a week and give a tenth of all I get.’ “But the tax collector stood at a distance. He would not even look up to heaven, but beat his breastand said, ‘God, have mercy on me, a sinner.’ “I tell you that this man, rather than the other, went home justified before God. For all those who exalt themselves will be humbled, and those who humble themselves will be exalted.”
People were also bringing babies to Jesus for him to place his hands on them. When the disciples saw this, they rebuked them. But Jesus called the children to him and said, “Let the little children come to me, and do not hinder them, for the kingdom of God belongs to such as these. Truly I tell you, anyone who will not receive the kingdom of God like a little child will never enter it.”

We live in a world where all the energy goes into “measuring up.” Who has the most credentials, the best resume, the highest grades, the top salary and on we could go.

Meanwhile, Jesus establishes a Kingdom where all the energy goes into “measuring down.”

The world works like a kid at an amusement park standing in a roller coaster line just hoping and praying that they will measure up to the height line to be admitted to the ride.

It reminds me of a story I once heard about the pulitzer prize winning author, David McCullough. He does all his writing in a small primitive cabin that sits behind his residence at the end of a trail. As the trail ends, one comes to a gate and next to the gate is a measuring rod with a sign. The sign says you must be no taller than the mark in order to be admitted. In other words. You must measure down. (Only his grandchildren can get in.)

If there’s one consistent message in all Jesus has said thus far in this journey from Transfiguration Mountain to the Mount of Golgotha, it is this: “Measure down.” In today’s text he puts it this way:

Truly I tell you, anyone who will not receive the kingdom of God like a little child will never enter it.”

As I’ve said before, he’s not talking about becoming care-free and whimsical and full of wonder child-likeness, though that’s a good thing. No, Jesus is saying the only way you can get into my kingdom is to come in the same way a child does; with no qualifications save the one qualification of having no qualifications to commend you. In the first century children had no status or rights or regard from the society. The Pharisees, as well as Jesus disciples, routinely handled them like a bouncer would, pushing them out of the way.

Jesus will not have it. Along the journey Jesus has pointed out example after example of what he’s looking for and who he’s not. The kingdom exemplars he identifies are women, widows, beggars, lepers, tax collectors, prostitutes, crippled, children, demon possessed and oppressed and so on. Today’s text is filled with it. Today it’s a powerless albeit persistent widow and a despicable, shame-filled tax collector. Contrast that with an unrighteous, dishonest, powerful judge and a meticulously careful and proud rule follower Pharisee.

I don’t know about you, but I have given much of my life to the quest of “measuring up.” I think I’m really only on the cusp of learning what it means to “measure down.” “But you are a teacher of the Word of God,” you say. And I say, “Yes, so were the Scribes and Pharisees.” My ability (or not) to teach Scripture and minister the Word of God no more qualifies me to enter God’s Kingdom than a rich person’s wealth or an important person’s status or a do-gooder’s do-gooding qualifies them.

Jesus is not telling us we have to become status-less or poor or widowed or afflicted with leprosy or a child in order to enter his kingdom. He’s saying we must become “like them” in this respect: we claim no right to anything and depend on God’s mercy for everything. To the extent we cannot become “detached” from all of our wealth and status and otherwise highly valued qualifications, we must divorce ourselves from them. (we will see that one in play tomorrow)

When we finally learn to value ourselves only in the way we are valued by God and not by all the metrics the world uses to deem some worthy and others worthless, we will have finally measured down. When we finally understand we are the same as all the people that our distinctions have distinguished us from, we will finally have learned that they measure up. When we finally learn to value the least among us in the same way we value ourselves, then we will have entered the Kingdom of God.

And in the end, this will be the only Kingdom still standing. Trust me when I say, we will want to be in that number. We must learn to sing the song now.

Reflect on this claim: When we finally learn to value ourselves only in the way we are valued by God and not by all the metrics the world uses to deem some worthy and others worthless, we will have finally measured down.