Be Careful How You Read - Seedbed
close
Menu 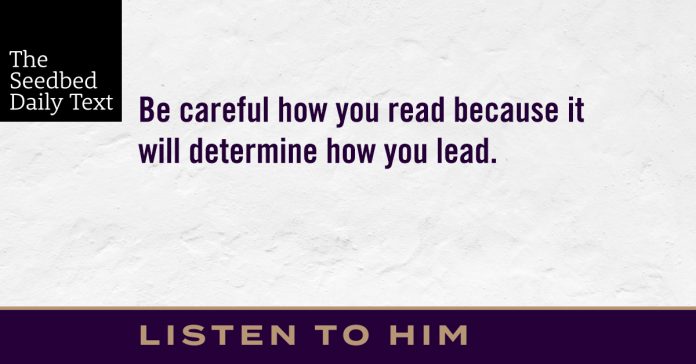 Jesus entered Jericho and was passing through. A man was there by the name of Zacchaeus; he was a chief tax collector and was wealthy. He wanted to see who Jesus was, but because he was short he could not see over the crowd. So he ran ahead and climbed a sycamore-fig tree to see him, since Jesus was coming that way.

When Jesus reached the spot, he looked up and said to him, “Zacchaeus, come down immediately. I must stay at your house today.” So he came down at once and welcomed him gladly.

All the people saw this and began to mutter, “He has gone to be the guest of a sinner.”

But Zacchaeus stood up and said to the Lord, “Look, Lord! Here and now I give half of my possessions to the poor, and if I have cheated anybody out of anything, I will pay back four times the amount.”

Jesus said to him, “Today salvation has come to this house, because this man, too, is a son of Abraham. For the Son of Man came to seek and to save the lost.”

Zacchaeus gets a bad wrap. I think it’s undeserved.

I cannot overseers the importance of reading the Bible carefully. Once we see things in a certain way, it is hard to “un-see” them that way again. I don’t know about you, but for most of my Bible reading life I’ve seen Zacchaeus as a “wee little man” who was a lying, cheating, stealing, low down dirty scoundrel of a tax collector. And did I mention stealing? Everybody hated him.

Why have I thought this? Well, for starters, he as much as admitted it didn’t he when he said he would give half of his possessions to the poor and pay back anyone he had cheated four times the amount. Wasn’t that pretty much an admission of guilt? After all, wasn’t that why Jesus went to his house; to scold him into changing his ways?”

As I learn from my own teachers to read more carefully, I am beginning to see Zach a bit differently. Most translations of Luke 19:8 translate the Greek verb for “give” as the present tense verb that it is. In other words, instead of Zacchaeus saying, “I will give half of my possessions to the poor,” he actually said, “I give half of my possessions to the poor.”  The same can be said of the latter report where he actually says, “I pay back four times the amount to anybody I have cheated.”

Zacchaeus is telling Jesus of his present policy and practice as relates to money. Here’s a wealthy person who gives away half of his possessions to the poor. He tithes 50% to the needy. Meanwhile, everybody around has him in the category of “sinner,” which effectively means scumbag outcast. Nowhere is there a report that Zach actually cheated anyone. Whether or not he had done so before, this policy of paying back four times the amount seems more than fair. Given the kind of report he is offering here, he seems like the kind of guy who would catch and report his own errors. Think about it. Why would a guy who gives half of his holdings to the poor turn around and cheat them on their taxes?

When Jesus called out his name and said he wanted to come over, that was all good news to Zacchaeus. He “welcomed him gladly” we are told. One would think if Zacchaeus was the scuzball everyone said he would have been mortified that Jesus wanted to come to his house.

So rather than this being a “repentance to salvation” story as it is commonly read, it now looks like a vindication to restoration to salvation story. The only people who seem in need of repentance are the grumblers who are angry that Jesus went to see him. When Jesus recognizes Zacchaeus as a “son of Abraham,” he basically restores him to the community.

In short, just like with the widows and the prostitutes and the Samaritan leper and the tax collector in the temple and the blind beggar, Jesus adds Zacchaeus to the list of all-stars you want to be like. It’s worth pointing out that Zacchaeus, unlike the rich ruler of a few days back, is an example of a wealthy person who hits the mark. And the grumbling crowd? They get added to the naughty list.

The long and short of today’s lesson: Be careful how you read because it will determine how you lead.

It turns out Zacchaeus wasn’t such a “wee little man” after all. At least he’s got a pretty big heart.

So what do you think of Zacchaeus now? How does this impact your approach of reading Scripture more carefully?

© Seedbed 2021
Be Careful How You Read
MORE STORIES