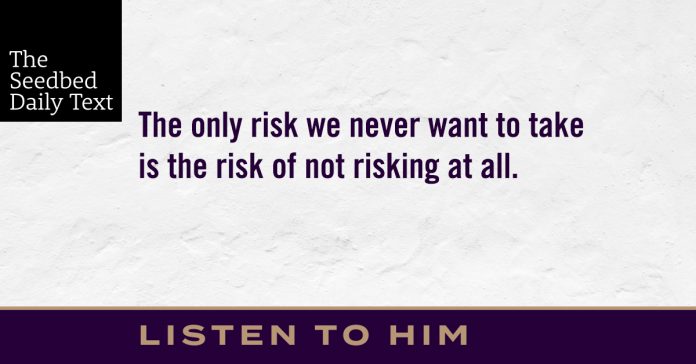 While they were listening to this, he went on to tell them a parable, because he was near Jerusalem and the people thought that the kingdom of God was going to appear at once. He said: “A man of noble birth went to a distant country to have himself appointed king and then to return. So he called ten of his servants and gave them ten minas. ‘Put this money to work,’ he said, ‘until I come back.’

“But his subjects hated him and sent a delegation after him to say, ‘We don’t want this man to be our king.’

“He was made king, however, and returned home. Then he sent for the servants to whom he had given the money, in order to find out what they had gained with it.

“The first one came and said, ‘Sir, your mina has earned ten more.’

“‘Well done, my good servant!’ his master replied. ‘Because you have been trustworthy in a very small matter, take charge of ten cities.’

“The second came and said, ‘Sir, your mina has earned five more.’

“His master answered, ‘You take charge of five cities.’

“Then another servant came and said, ‘Sir, here is your mina; I have kept it laid away in a piece of cloth. I was afraid of you, because you are a hard man. You take out what you did not put in and reap what you did not sow.’

“His master replied, ‘I will judge you by your own words, you wicked servant! You knew, did you, that I am a hard man, taking out what I did not put in, and reaping what I did not sow? Why then didn’t you put my money on deposit, so that when I came back, I could have collected it with interest?’

“Then he said to those standing by, ‘Take his mina away from him and give it to the one who has ten minas.’

“He replied, ‘I tell you that to everyone who has, more will be given, but as for the one who has nothing, even what they have will be taken away. But those enemies of mine who did not want me to be king over them—bring them here and kill them in front of me.’”

In the Kingdom of God, the greatest risk is taking no risk at all.

The parable in today’s text is pretty straightforward. Permit me a loosely correlated analogy putting it in today’s terms. A mina would come to about four months wages for one of these servants. For purposes of this analogy, a mina equals whatever you make in four months.

Let’s say I make $10,000 a month, which to be clear, I do not. That makes my mina worth $40,000. Now suppose my boss gave me an additional $40,000 and instructed me to use this money to make more for the company. In other words, it was not my money but the company’s. My job was to take the company’s money and make the company more money. So far so good.

What do I do? Should I buy a car wash? How about a herd of cattle? Maybe I should consider a multi-level marketing pyramid scheme with some new health revolutionizing drink? Or I could just put it into securities like Facebook or Tesla or Apple. Then again I could just buy a whole lot of Powerball lottery tickets. What will I do? Where is the most intelligent, promising risk?

How about you? It doesn’t seem like giving the money away is an option here. Do you make a safe play or take a big risk? There’s only one wrong response in this scenario: Doing nothing with the money.

What if I came to the realization that the money I thought was mine was not mine after all? What if I finally realized it all belonged to God yet had been entrusted to me? And what if I understood God wanted me to use God’s money to do things that produced a return for his Kingdom? How would that change the way I handled money?

I know a man of extraordinary wealth who uses his exceptional investment skills to make more money all for the purposes of investing it into promising ventures serving the Kingdom of God. It’s extraordinary to behold, and he keeps making more and more money. The more he makes the more he gives. There’s no percentage limit like a tithe. I sometimes wonder if he even keeps a tithe for himself.

It makes me wonder what it would be like if I even invested a tithe, 10%, of the money entrusted to me for the sake of God’s Kingdom—not giving it, mind you, but risking it or trading on it? It sounds fun, but if I’m honest I’ve got to admit this has never occurred to me before. I live with a binary mentality as it comes to money. I either keep it for my own uses or I give it away. What if there were a category between for-profit and non-profit? What if I had a genuine for-faith mentality, risking resources for the sake of a greater return to the Kingdom of God?

I know this may not be exactly what the parable in today’s text is talking about. On the other hand, maybe it is. Jesus is teaching us disciples what it means to be a holy risk taker for the sake of his Kingdom in the period between his first coming and second coming. It can be about money, but it can also be about the kinds of gifts, talents and abilities God has given us.

One thing is for sure. The only risk we never want to take is the risk of not risking at all.

How might you become more of a risk-taker when it comes to sowing for a great awakening to the kingdom of God?