Get Ready for the Great Reversal - Seedbed
close
Menu 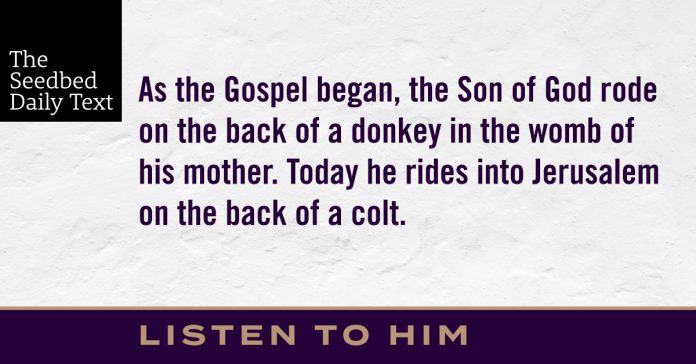 After Jesus had said this, he went on ahead, going up to Jerusalem. As he approached Bethphage and Bethany at the hill called the Mount of Olives, he sent two of his disciples, saying to them, “Go to the village ahead of you, and as you enter it, you will find a colt tied there, which no one has ever ridden. Untie it and bring it here. If anyone asks you, ‘Why are you untying it?’ say, ‘The Lord needs it.’”

They replied, “The Lord needs it.”

When he came near the place where the road goes down the Mount of Olives, the whole crowd of disciples began joyfully to praise God in loud voices for all the miracles they had seen:

“Blessed is the king who comes in the name of the Lord!”

“Peace in heaven and glory in the highest!”

Some of the Pharisees in the crowd said to Jesus, “Teacher, rebuke your disciples!”

“I tell you,” he replied, “if they keep quiet, the stones will cry out.”

As he approached Jerusalem and saw the city, he wept over it and said, “If you, even you, had only known on this day what would bring you peace—but now it is hidden from your eyes. The days will come upon you when your enemies will build an embankment against you and encircle you and hem you in on every side. They will dash you to the ground, you and the children within your walls. They will not leave one stone on another, because you did not recognize the time of God’s coming to you.”

So many divine coincidences swirl in the air now. Jesus turns everything around.

In the beginning the “wise” kings from foreign lands came to see the child born “King of the Jews.” Today he rides into Jerusalem hailed by the people, “Blessed is the King who comes in the name of the Lord.”

In the beginning, the heavenly host of angelic beings shouted, “Glory to God in the highest and on Earth, peace and good will toward men.” Today, the crowds of disciples declare, “Peace in heaven and glory in the highest!”

In the beginning, Simeon prophesied about him, “This child is destined to cause the falling and rising of many in Israel, and to be a sign that will be spoken against, so that the thoughts of many hearts will be revealed. And a sword will pierce your own soul too.” Today we stand on the eve of its fulfillment.

We have arrived at our destination; the journey now complete. We will now behold him undertake that for which he came. The echos of Isaiah via John still resound in the sky,

“A voice of one calling in the wilderness,‘Prepare the way for the Lord,    make straight paths for him.Every valley shall be filled in,    every mountain and hill made low.The crooked roads shall become straight,    the rough ways smooth.And all people will see God’s salvation.’”

Get ready for the great reversal.

Jesus turns everything around.

Time to ask again—are you still praying these prayers, or are they beginning to pray you? Reflect on how they are impacting you.

© Seedbed 2021
Get Ready for the Great Reversal
MORE STORIES