Invite Jesus to Church and Prepare Yourself - Seedbed
close
Menu 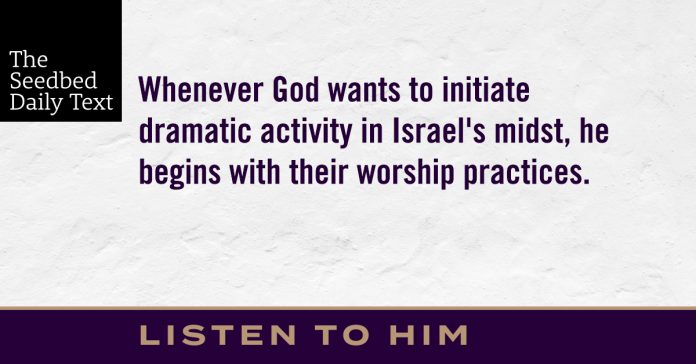 When Jesus entered the temple courts, he began to drive out those who were selling. “It is written,”he said to them, “‘My house will be a house of prayer’; but you have made it ‘a den of robbers.’”Every day he was teaching at the temple. But the chief priests, the teachers of the law and the leaders among the people were trying to kill him. Yet they could not find any way to do it, because all the people hung on his words. One day as Jesus was teaching the people in the temple courts and proclaiming the good news, the chief priests and the teachers of the law, together with the elders, came up to him. “Tell us by what authority you are doing these things,” they said. “Who gave you this authority?”He replied, “I will also ask you a question. Tell me: John’s baptism—was it from heaven, or of human origin?”

They discussed it among themselves and said, “If we say, ‘From heaven,’ he will ask, ‘Why didn’t you believe him?’ But if we say, ‘Of human origin,’ all the people will stone us, because they are persuaded that John was a prophet.”

So they answered, “We don’t know where it was from.”

Jesus said, “Neither will I tell you by what authority I am doing these things.”

He went on to tell the people this parable: “A man planted a vineyard, rented it to some farmers and went away for a long time. At harvest time he sent a servant to the tenants so they would give him some of the fruit of the vineyard. But the tenants beat him and sent him away empty-handed. He sent another servant, but that one also they beat and treated shamefully and sent away empty-handed. He sent still a third, and they wounded him and threw him out.“Then the owner of the vineyard said, ‘What shall I do? I will send my son, whom I love; perhaps they will respect him.’“But when the tenants saw him, they talked the matter over. ‘This is the heir,’ they said. ‘Let’s kill him, and the inheritance will be ours.’ So they threw him out of the vineyard and killed him.“What then will the owner of the vineyard do to them? He will come and kill those tenants and give the vineyard to others.”

When the people heard this, they said, “God forbid!”

Jesus looked directly at them and asked, “Then what is the meaning of that which is written:

“‘The stone the builders rejected
has become the cornerstone’?

Everyone who falls on that stone will be broken to pieces; anyone on whom it falls will be crushed.”

Revolution begins with reform at the home office. Scan back through your Old Testament and you will see it throughout. Whenever God wants to initiate dramatic activity in Israel’s midst, he begins with their worship practices. He goes straight to the home office.

Remember the story of Gideon in the book of Judges? Here’s what the angel told Gideon:

Then Elijah said to all the people, “Come here to me.” They came to him, and he repaired the altar of the Lord, which had been torn down. Elijah took twelve stones, one for each of the tribes descended from Jacob, to whom the word of the Lord had come, saying, “Your name shall be Israel.” 1 Kings 18:30-31.

The king ordered Hilkiah the high priest, the priests next in rank and the doorkeepers to remove from the temple of the Lord all the articles made for Baal and Asherah and all the starry hosts. He burned them outside Jerusalem in the fields of the Kidron Valley and took the ashes to Bethel. He did away with the idolatrous priests appointed by the kings of Judah to burn incense on the high places of the towns of Judah and on those around Jerusalem—those who burned incense to Baal, to the sun and moon, to the constellations and to all the starry hosts. He took the Asherah pole from the temple of the Lord to the Kidron Valley outside Jerusalem and burned it there. (2 Kings 23:4-6)

Interestingly, the Temple should have been a place where the poor and the oppressed found refuge. Instead, they found themselves pushed to the very margins of the society. They had been robbed of their place in the presence of God. God intended the Temple to be a place of centrifugal blessing—spinning outward the grace and mercy of God. The religious establishment had turned it into a place of centripetal privilege—pulling inward worldly status, wealth, and privilege. The exact opposite of what God intended had happened. Jesus, the one greater than the Temple, turns it inside-out and upside-down in his mission to turn everything around.

Soon Jerusalem will be the place from which the Word goes out, a place of sending, where the gospel moves outward with Holy Spirit’s centrifugal power of love to Judea, Samaria and away to the ends of the Earth.

For too long now, the church has been a centripetal institution, a place of elaborate edifices where power and privilege and wealth collect. No wonder we speak so much of “going to church.” Once again, the poor and the oppressed find themselves pushed out to the margins of society and blamed for their own condition. Is it time for some reform at the home office again?

Holy Week is upon us, but we must decide. Will it be another trip through the ritualistic ruts of our religious track; a parade of pomp and circumstance? Or will we invite Jesus to come in and turn over some tables; maybe institute a little apostolic reform, or a lot?

How will Holy Week be different for you this year—more than just another lap around the religious track?