Stop and Help the Homeless Man 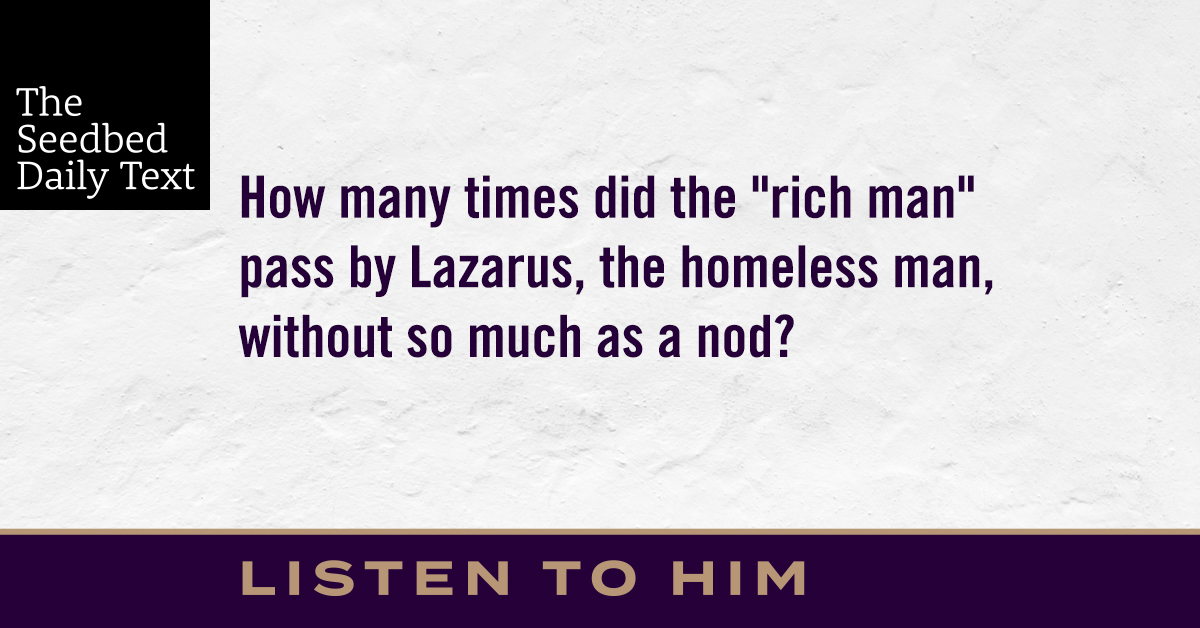 “No one can serve two masters. Either you will hate the one and love the other, or you will be devoted to the one and despise the other. You cannot serve both God and money.”

The Pharisees, who loved money, heard all this and were sneering at Jesus. He said to them, “You are the ones who justify yourselves in the eyes of others, but God knows your hearts. What people value highly is detestable in God’s sight.

“The Law and the Prophets were proclaimed until John. Since that time, the good news of the kingdom of God is being preached, and everyone is forcing their way into it. It is easier for heaven and earth to disappear than for the least stroke of a pen to drop out of the Law.

“There was a rich man who was dressed in purple and fine linen and lived in luxury every day. At his gate was laid a beggar named Lazarus, covered with sores and longing to eat what fell from the rich man’s table. Even the dogs came and licked his sores.

“The time came when the beggar died and the angels carried him to Abraham’s side. The rich man also died and was buried. In Hades, where he was in torment, he looked up and saw Abraham far away, with Lazarus by his side. So he called to him, ‘Father Abraham, have pity on me and send Lazarus to dip the tip of his finger in water and cool my tongue, because I am in agony in this fire.’

“But Abraham replied, ‘Son, remember that in your lifetime you received your good things, while Lazarus received bad things, but now he is comforted here and you are in agony. And besides all this, between us and you a great chasm has been set in place, so that those who want to go from here to you cannot, nor can anyone cross over from there to us.’

“He answered, ‘Then I beg you, father, send Lazarus to my family, for I have five brothers. Let him warn them, so that they will not also come to this place of torment.’

“Abraham replied, ‘They have Moses and the Prophets; let them listen to them.’

“‘No, father Abraham,’ he said, ‘but if someone from the dead goes to them, they will repent.’

“He said to him, ‘If they do not listen to Moses and the Prophets, they will not be convinced even if someone rises from the dead.’”

What was his name?

Every morning on my way to work and every afternoon on my way home I pass him by. He is a homeless man. He sells a weekly newspaper. The paper is written by homeless men and women. My neighbor down the street in my last neighborhood is the editor of the paper. To qualify to sell the papers you must be homeless (or at least you must have been when you started).

Each day as I approach the intersection I remind myself that I don’t have any cash in my car. I avoid eye contact as much as possible and when the light changes I head for home. I know he’s going to be there. You can set  your clock by him. I know I only need a dollar to buy a paper. So why don’t I take the time to pick up a few quarters from my bedside table, put them in my pocket and buy a paper once a week; or even once in a while? I think about it every day and yet I still haven’t managed to do it.

It’s so easy for me to villainize this unnamed “rich man,” whose crime had nothing to do with being rich and everything to do with not caring. Strangely, it’s so easy for me to excuse my upper middle class, minivan driving self for passing by the homeless man selling dollar newspapers on my way to pick up a $5 grande five pump, no-water Chai Latte with a shot of espresso before I head into the office.

I’ve got another chance tomorrow.

P.S. His name was Lazarus. And the rich man’s name? Nobody cares.

Do you tend to see people in apparent need or not see them? Or do you see them and try to ignore and avoid them? What might that say about you?

Stop and Help the Homeless Man