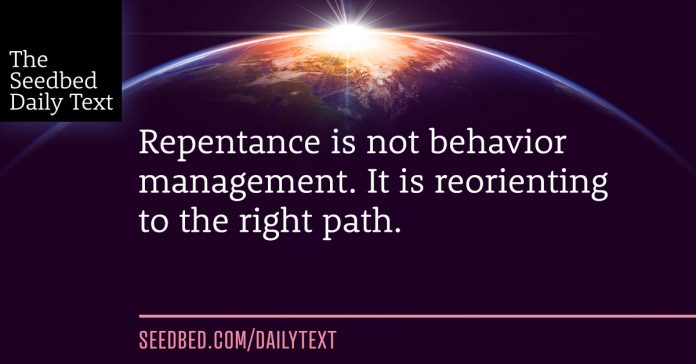 In those days John the Baptist came to the Judean wilderness and began preaching. His message was, 2 “Repent of your sins and turn to God, for the Kingdom of Heaven is near.”

3 The prophet Isaiah was speaking about John when he said,
“He is a voice shouting in the wilderness,
‘Prepare the way for the Lord’s coming!
Clear the road for him!’”

We’re half-way through our Advent mission, so let’s take a look at our trajectory so far: We remember that Advent breaks in to our present darkness with hope from the future, where Jesus will come back to re-make the world he created. Until he comes back, we are to live as though it’s already happened, bringing good news to everyone.

Sounds simple enough. So then why aren’t we there yet?

I think it’s more mission failure. We mean well, and we want to follow Jesus in his mission now. But our sins, brokenness, and distractions keep pushing us off course, leaving us wondering where we’re going.

So what do we do? We begin where the Prophet John did when he announced Jesus’s mission… with repentance: “Repent of your sins and turn to God, for the Kingdom of Heaven is near.”

Remember, Advent is a season to help us reorient our lives to Jesus’, and repentance is where we start. The problem is, many of us have a distorted definition of repentance. We tend to think of it as feeling guilty for what we’ve done, promising not to do it again, and then working hard at behavior management to keep that promise.

We look at repentance as walking away from something, but actually repentance is reorienting us to something. In this case, someone.

John’s idea of repentance would have been formed by it’s Hebrew word shub, which means “To turn back and retrace your steps, in order to return by the right way.”

Here’s what that looks like: I have no sense of direction. None. Zero. Even when the sun is setting, I get confused which way is west. I get lost in my own house. It’s even worse on the road, especially if I have to go to a new part of town. “It’s just a couple of minutes north of the mall,” my wife will say.

Okay. I’ve been to the mall. I can do that. I pass the mall. It’s been two minutes. Or was it two miles? Now it’s been five minutes. Now seven. Now I’m in another town.

Wait—that McDonald’s looks familiar. I think I should have turned there. Make another turn. Two minutes. Four. Six. Not it.

Before the iPhone I would have stopped at a gas station for directions after the third or fourth u-turn. Now I pull over and try to figure out where the little blue dot on Google Maps says I am. But sometimes I go a while before I realize I’m not where I was intended to be.

Once, when driving from Dallas to Tulsa, I made a pit stop halfway through the trip. I got back on the highway and drove for a another hour. As I crossed the state line back into Texas, I realized I had turned south instead of north.

Yep—one hour in the wrong direction.

I asked my wife how she always know which way we’re going, can find a new way to get there, and still never get lost. “Easy,” she said, “I just remember which way is north, and then I can tell which roads will go what direction to get me there.”

“I wish I could do that,” I said. She pointed at the little digital compass mounted in my rear-view mirror, and said I can always start there to reorient myself.

This is we take a season, not just a day, to prepare for Christ’s return. Because repentance is not about working up more guilt or a re-doubling of sin management efforts. Repentance is remembering and reorienting ourselves to the right path, which is Jesus—who is the way the truth and the life. It’s a constant stopping and turning around on the highway of holiness.

But we can’t do it alone.

Heavenly Father, we confess that we still get lost sometimes, wandering down roads we shouldn’t. We pray your Holy Spirit would help us to see where we’re going and turn back, retracing our steps in order to return to your Son by the right way. In Jesus name we pray. Amen.