The Table in the Stable: Celebrating Holy Communion at Christmas 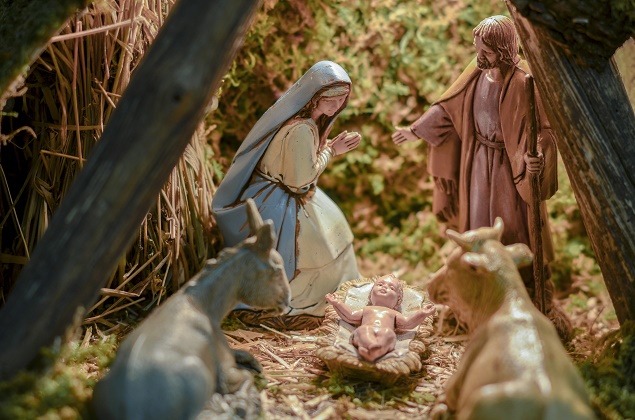 Growing up, my family was involved in church, but we often took off on the holidays. Some families only show up on Christmas Eve and Easter morning, but that’s when we stayed home. Thus, one of my first Christmas Eve services was at the United Methodist congregation we attended during seminary. The service concluded with Holy Communion, and I just assumed this was what Christmas Eve services did. It made sense to me; what better way is there to celebrate the incarnation of our Lord than to meet him at the Table? The Word took on flesh and dwelt among us; at the Table, we pray for ordinary bread and wine to take on Spirit and become for us the body and blood of Christ.

But, many Christmases later, I’ve realized that celebrating Holy Communion at Christmas is not normative for many congregations. This is true not only for those who lean toward contemporary or “seeker-friendly” kinds of events on Christmas Eve—stage productions or Christmas cantatas that don’t naturally mesh with the service of Word and Table, but also for more traditional “lessons and carols” services. The “mass” gets left out of “Christmas.” And I would argue that leaving the “mass” out of Christmas can all too easily lead to leaving “Christ” out of Christmas. The Eucharist anchors us into celebrating Christ, and without such anchors we can quickly drift into celebrating sentimentality or custom or the temptation to market ourselves and our ministries to the visitors filling the seats.

But if Holy Communion has not been part of our congregation’s Christmas practice, how can we introduce it appropriately? I faced this question a few years ago. On the one hand, Holy Communion may not resonate with a congregation’s Christmas piety; if the congregation views Communion as a solemn, somber fixation on our Lord’s sacrificial death, they may be reluctant to impose the sacrament on their Christmas joy. I happen to disagree with both this view of Communion and this view of Christmas (“Nails, spear shall pierce Him through, / The cross be borne for me, for you. / Hail, hail the Word made flesh, / the Babe, the Son of Mary!”)—but it is indeed an insensitive imposition. Re-education takes time. On the other hand, Christmas Eve services often host numerous visitors, many of whom are not followers of Jesus Christ. Some are present reluctantly, fulfilling duties to their family. Even if we practice an open Table, where sinners are earnestly invited to the Gospel feast, do we want to impose that grace on visitors who have grudgingly accompanied mom to church for Christmas? There are also practical considerations; it takes time to offer Holy Communion. Most people have an additional agenda on Christmas Eve—places to go, people to see. We worship planners certainly shouldn’t cater to the various golden calves of our culture, but we need to recognize the world we live on and the people we’re seeking to serve. Does our service meet people where they are? Are we gracious in our offer of grace?

With these realities in mind, I decided, for that first Christmas Eve service featuring Holy Communion, to offer Communion as an appendix to the service. After the service of Word, carols, and candles, I offered a benediction with an invitation to remain for Holy Communion. About half of the people remained for the next fifteen minutes as we gathered at the Table. I’ve often questioned that approach; perhaps, instead, I could have couched that break as a passing of the peace—a semicolon rather than a period. But it met the pragmatic need of easing a congregation into a different Christmas practice.

The following year I was prepared to do the same, but the worship committee desired to make Holy Communion part and parcel of the whole service. I still balked at how to make this palatable for reluctant visitors, but came up with a solution that worked well: Following the sermon, we lit our candles and sang “Silent Night.” We then sang the first three verses of “O Little Town of Bethlehem” as an invitation to the Table, and the final verse (“Cast out our sin, and enter in”) as a prayer of confession. With our candles still lit and the congregational responses projected on the wall, I led in praying the Great Thanksgiving. We had to extinguish our candles before coming forward, but the candlelight offered a wonderful ambiance. In the darkness of the sanctuary, we encountered Christ our Light; and we met him in that peace and stillness at the Table set in a stable.

Keep the “mass” in Christmas; it might just be the best way to keep “Christ” there as well.

The Table in the Stable: Celebrating Holy Communion at Christmas